Give humble thanks if you find yourself at the old Tarrant County Courthouse looking at a painting that depicts the long-gone Texas Spring Palace. Plenty of passionate detective work and unheralded effort will have gone into rediscovering, restoring, and hanging that simple piece of folk art by an obscure San Antonio painter. 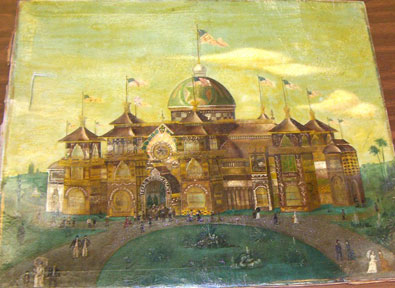 And, as is often the case, the backstory is as interesting as the work of art itself, involving a lost painting, mistaken identity, and good old-fashioned detective work.

“Few people will have any idea of what it took or just how many chips had to fall exactly right to make it happen,” local art historian Scott Barker said. Go back to May 29, 1889, when the fantastical-looking but ill-fated Texas Spring Palace theme park opened near Main Street and the T&P Railroad tracks south of downtown. The wooden fairground walls and roof were designed to resemble an Oriental palace, a novel sight in hardscrabble Fort Worth that was intended to help showcase the fledgling city and attract settlers. An artist (who signed with his initials and an abbreviated surname) put brush to canvas that year and recreated the grand fairground.

Flash forward about 100 years. Fort Worth attorney Scranton Boulware Jones was browsing at an antique mall when he discovered and purchased the painting. In 1981, it had been exhibited at San Antonio’s Witte Museum, whose curators scrutinized the obscure artist’s signature and credited the painting to “O.A. Mio.”

Jones was friends with local attorney Jenkins Garrett, the primary benefactor of the UTA Special Collections in Arlington. Garrett convinced Jones to donate the painting to UTA.

Only one other Palace painting was known to ever have existed. In 1890, the palace’s elaborate wooden walls became kindling when an accidental fire swept through the park, causing a human stampede and killing a man. Artist Orin McCormick painted the palace in full blaze, depicting the panic and chaos. Historians don’t know what happened to that painting, but they’ve seen cabinet cards that were reproduced from the painting and sold as souvenirs of the tragic event.

Jump ahead to 2003: Tarrant County Historical Society members were visiting the UTA Library and noticed the “Mio” painting on display. Dalton Hoffman later mentioned the painting to Barker, an art collector and sleuth who loves nothing better than researching the city’s early artists and sharing his information
with others.

“That’s how I learned that an antique painting of the Spring Palace existed,” Barker said. “I arranged for myself, Dr. Rick Selcer, who knows more about the Texas Spring Palace than any man alive, and [local history buff] Clara Ruddell to go see it. That was on a Saturday in August 2003, and that turned out to be the day we made the connection between the UTA painting signed only with initials and the McCormick painting known only by its [cabinet card] photograph.”

Turns out, both were done by the same man, who signed his first painting “O.A. McC” — the Witte curators had apparently misread the surname as “Mio.” The second painting, intended for reproduction on cabinet cards, contained the artist’s full name.

Barker, Selcer, and Ruddell decided that the remaining Palace painting needed to be shown to the public, but the years hadn’t been kind. Cleaning and repairing ripped canvas and replacing flaked paint is expensive.

Arthur Weinman, who secures historic artifacts for the old Tarrant County courthouse’s 1895 Room museum, spearheaded negotiations with UTA and promised restoration and a secure home for the painting. County officials and the Tarrant County Historical Society vowed to raise the estimated $15,000 needed for restoration and framing. Finding a suitable restorer took months. The painting has recently been refurbished and nestled inside a hand-carved custom frame.

UTA agreed to an alternating loan — a year in the old courthouse, a year at UTA, and back and forth.

“Every other year we are going to get it back,” said Special Collections Director Ann Hodges. “We are very grateful they found the money to get the painting restored. Our agreement allows us both to have the opportunity to display it.”

Plans are to exhibit the painting at the courthouse by this summer.

“I can’t wait for the day when the painting goes on display,” Barker said. “I expect to cry a little and smile a lot.”