I went to the AMC Grapevine Mills this past weekend to see Private Eye, a Korean movie that’s so obscure that it has neither an English-language website nor an entry on the Internet Movie Database, and yet here it is in Tarrant County. It’s pretty good, too. The main character is a private detective in the 1910s, during the Japanese occupation of Korea. (Note: The movie’s Japanese characters do not come off well, to put it mildly.) The hero teams up with a wimpy medical student to solve a murder, which leads to a string of killings of Korean politicians. The film’s not deep or anything, but it’s a good yarn that’s worth checking out for either fans of Korean cinema or detective-movie aficionados looking for something off the beaten path. It’s still playing for the next two days at the AMC Grapevine Mills.

Elsewhere, National Public Radio just refused to air a review of Kirby Dick’s documentary Outrage, which outs several gay Republican politicians by interviewing men who claim to have had affairs with them. Nathan Lee’s review of the movie was apparently spiked because it repeated the film’s specific allegations. You can question the film’s tactics (I haven’t seen it yet, by the way), but it seems that NPR is going too far censoring the review for merely reporting whom the movie names. The fact that Sen. Larry Craig is one of the GOP pols supposedly being protected here just makes NPR look more nitpicking. File that under the heading of Who Do You Think You’re Fooling?

Dick’s previous film was an interesting if wayward exposé on the movie ratings system called This Film Is Not Yet Rated. I guess when your last name is Dick, provocation is a logical way to go. Interesting note: Apparently, Florida Gov. Charlie Crist is also named in the film as a closeted gay Republican. He just announced that he’s running for the U.S. Senate. 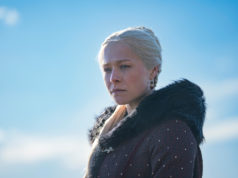