Wildly popular in their own time, Noël Coward’s stage comedies fell from favor in the 1960s and have been struggling ever since. His pieces of light entertainment were never as acute or socially conscious as George Bernard Shaw’s plays or as subversively absurdist as Oscar Wilde’s. They reflected the hedonistic mood of Jazz Age Britain and later took in the Great Depression and World War II without losing their urbane flippancy and dry wit. Those qualities were embodied by Coward himself, who frequently acted on stage and in movies and also enjoyed a nice sidelight as a musician. Coward’s 1924 farce Easy Virtue was made into a 1928 film by Alfred Hitchcock, who converted it into a thriller. A newer, more faithful film version of Easy Virtue hits our theaters this week, and flawed as it is, it’s strong enough to carve out a place in our multiplexes.

The story takes place at the English estate of the Whittaker family, who await the return of their only son, John (Ben Barnes), from his holiday in France. When he comes back, though, John surprises them with a new wife named Larita (Jessica Biel), whom he’s only met recently. The Whittakers’ shock turns to consternation when they discover that Larita is a widow considerably older than John, who has to work for a living as a race car driver. Worst of all, she’s American. 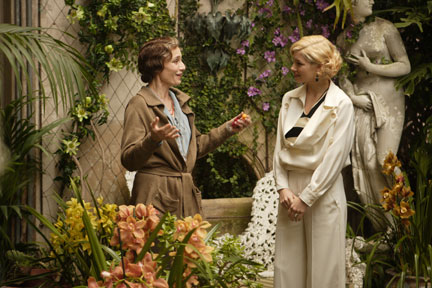 The play has been adapted to the screen by Stephan Elliott, the Australian filmmaker who made a big splash in 1994 with The Adventures of Priscilla, Queen of the Desert, though he’s been little heard from in this decade. Elliott and co-writer Sheridan Jobbins have retained much of Coward’s meringue-like dialogue. (“Have you had as many lovers as they say?” “I don’t think so. Hardly any of them loved me.”) But they’ve revamped the play considerably in other ways. The Whittakers are no longer cardboard villains, especially John’s formidable mother (Kristin Scott Thomas, overdoing things for once), revealed to be laboring heroically to repair the family’s finances. Larita takes the trouble to learn the name of the Whittakers’ cook, which none of the Whittakers has bothered to do, but later turns out not to know her new mother-in-law’s first name. It’s a nice touch: The heroine’s American informality and egalitarianism stop short at the intimidating and hostile Mrs. Whittaker.

The filmmakers’ refusal to stack the deck is good, as is their fiddling with the plot point about an alleged impropriety that bobs up from Larita’s past. The flimsiness of the accusation against Larita in Coward’s play – involving a crazy jealous ex-husband and a painting – showed how easily the society of his time turned against a strong-willed woman. No doubt for the benefit of a contemporary audience, Elliott and Jobbins change this into something quite a bit heavier, and though it creates a whole cloud of implications, they handle it rather well.

The leading lady is a big void in the center of this film, though. Bless her heart, Jessica Biel is trying to prove that she’s an actress and not just a lad-mag pinup girl. Sadly, her inexpressiveness renders her the Natalie Wood of our generation, and her blonde Marcel hairdo doesn’t flatter her, either. The weakness doesn’t arise from Biel’s anachronistic acting style: Larita is supposed to stick out because she’s more modern than the other characters. No, Biel’s shortcomings are more basic. She isn’t funny, which is glaringly obvious in comic set pieces such as Larita’s extended sneezing fit from the flowers in Mrs. Whitaker’s greenhouse or when she accidentally kills the Whittakers’ chihuahua and tries to conceal the corpse. Biel’s emotional shallowness is ruthlessly exposed in the later scenes, when Larita starts to crack under the constant strain of her disapproving in-laws.

At least the men in the cast are excellent. Colin Firth is memorably sarcastic and resigned as John’s father, a psychically scarred war veteran, while Kris Marshall steals a few scenes as the Whittakers’ impassive butler who grows sympathetic toward Larita. Barnes (last seen looking pretty and sporting a weird accent in The Chronicles of Narnia: Prince Caspian) is spot on as the charming but callow John, and he does well singing several Coward songs on the soundtrack. One of the movie’s best moments comes early on when it briefly turns into a full-fledged musical, with Barnes bursting into “A Room With a View.” (By the way, Biel also sings over the opening and closing credits. Her singing is better than her acting.)

Coward wouldn’t have approved of the notes of class tension that Elliott and Jobbins inject into his work – the playwright preferred to stay clear of such things. Yet this is precisely what makes the film of Easy Virtue a more complex creation than its source. Without compromising its value as a comedy, this film delivers some satisfying drama as well and is far more enjoyable than last summer’s similarly themed film of Brideshead Revisited. If only the lead actress were even adequate, this might even be moving. It’s a shame, really. If you replaced her with Amy Adams, this would instantly be one of the year’s best movies. l