The Proposal makes an instructive contract with Management, the film that opened and promptly closed last month. Both movies are about the romantic travails of a woman of a certain age, portrayed by a likable star whom we’ve known for some years. The two romantic heroines have opposite problems. While Jennifer Aniston’s character in Management is afraid of being alone, Sandra Bullock’s character in The Proposal is afraid of commitment – she was orphaned at a relatively early age, and she’s shut herself down emotionally because she doesn’t want to be hurt again. The problem is, The Proposal tells us all of this, while Management lets us infer things about the main character and thus draws us into the story. This doesn’t make Management a great movie, but it shows the shortcomings of The Proposal in stark relief. 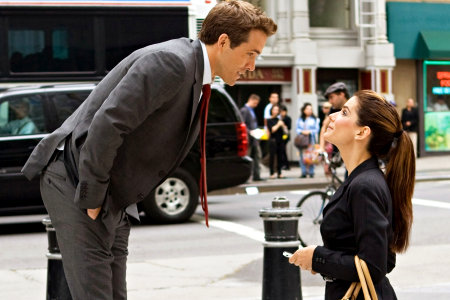 Bullock plays Margaret Tate, a high-powered, much-despised, Canadian-born book editor in Manhattan who discovers that her work visa has expired and that she’s due to be deported back north. Facing a sudden 12-month interruption of her career, she blackmails her put-upon executive assistant, Andrew (Ryan Reynolds), into marrying her so she can stay in the United States, though he quickly turns the situation to his own advantage, leveraging promises of a promotion and publication of the manuscript of his first novel out of her. Hounded by a skeptical immigration officer (Denis O’Hare), the two have a single weekend to find out everything about each other while taking a trip to see Andrew’s relatives in Alaska.

The film starts off well enough. Director Anne Fletcher takes full advantage of her star’s comedic skills. Bullock isn’t really convincing as the sort of boss who inspires fear and revulsion in her underlings, but she does relish the chance to play a cold person who’s forced to pretend to be warm and sweet. Fletcher gives her some delicate slapstick scenes like Margaret making an ironic show of kneeling to propose to Andrew or trying to negotiate a ladder in her high heels. The film also gets some mileage out of the Alaska setting, with Andrew’s difficult relationship with his dad (Craig T. Nelson) and Margaret’s discovery that Andrew’s family is wealthy. So many Hollywood movies don’t consider the possibility that people who live in hick towns might not be hicks. This one does and catches us off guard.

Once the movie sets itself up, though, it doesn’t have much place to go. The slapstick grows labored, with tiresome interludes involving a male stripper, a cute puppy, and our two leads literally running into each other naked. Margaret is charmed by Andrew’s family and becomes disenchanted with the idea of deceiving them, and whether she comes clean with them or not isn’t enough to hang the movie’s suspense on. Bullock gives a committed performance in spite of the script’s derivative nature, especially in a scene wherein Margaret opens up to Andrew. Yet despite the star’s commendable efforts, The Proposal still dies about halfway through.