Todd LaRose loves watching the Thunderbirds and the Blue Angels at the Alliance Airport air shows. It’s easy for LaRose to see them every year because he lives about a mile southeast of the airport, on the opposite side of Interstate 35.

What LaRose doesn’t love is feeling his house shake from the military jets flying over his neighborhood during the rest of the year. Records show that as many as 38 military jets a day take off from and land at Alliance for refueling and other reasons. 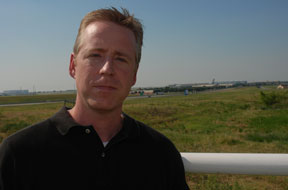 LaRose knew when he moved to the neighborhood several years ago that he would be near an airport, but nobody told him his home and family would be feeling the jet-powered vibrations of up to 20 fly-bys an hour, sometimes as late as 9 p.m.

“Homeowners get told [by real estate agents], ‘You won’t even notice it,’ ”
he said.

LaRose lives in the Saratoga subdivision developed by Hillwood Development Corporation. Before it was built, airport officials knew aircraft noise might be a problem. Airport managers commissioned a study in 1995 to determine the levels of aircraft noise in surrounding areas. Noise experts suggested the city make it mandatory for realtors to disclose the specific levels of noise to potential residents.

Fort Worth did not.

“We do not have anything on the local level about this,” Fort Worth communications officer Diane Covey said.

For two years, LaRose has chronicled the frequency, noise level, and low altitude of the flights. He repeatedly asked for help from Mayor Mike Moncrief and Fort Worth City Council member Sal Espino, e-mailing them photos and videos of the planes. He said he never heard back from either of them. (His subdivision is in Keller, but the source of the problem is the Fort Worth-owned airport.)

“My friends told me I can’t make a difference, but this is America, and I believe the pen is still mightier than the sword,” he said.

The planes’ altitudes are hard to gauge, but Dallas Waite, a former Army staff sergeant who lives near LaRose, said the jets fly so low “it’s like you could throw a rock and hit them.”

A “lot of people around here are pissed off about it,” said Waite, 27.

Other residents also think the jets fly too low, but the military aircraft at Alliance adhere to federal regulations about altitude, said Paul Blackford, who handles airport environmental issues in Texas for the FAA.

“They’re not afforded any special treatment, but I guess they’re a lot noisier,” Blackford said.

Not everyone in the neighborhood believes residents should complain. James Willard, 48, is a retired Navy veteran. He hears the jets as “the sound of freedom.”

Paula Lybrand, 53, said she knew what to expect moving into the neighborhood. “It’s loud, but I like to watch them,” she said of the jets.

Colleen Demel, however, said residents should have been informed about the jet training prior to buying a home. Demel is executive director at North Fort Worth Alliance, representing about 20 neighborhoods. She said real estate agents should be more transparent about homes with avigation easements.

The easements are meant to inform residents about aircraft noise, but most buyers aren’t told about the easements until they’re closing on a house. Avigation easements cover many homes in Hillwood’s two subdivisions near Alliance Airport, Saratoga and Heritage, Demel said.

“This needs to be disclosed up front,” she said. “You sign your life away and aren’t even told what an avigation easement is.”

Although the city owns Alliance Airport, Hillwood has operated it since the airport opened in 1989. Hillwood built LaRose’s neighborhood in 2001 as part of its 17,000-acre AllianceTexas project, which includes two major communities near the airport.

Hillwood officials declined to comment about the noise study’s suggestion for real estate disclosure. Dave Pelletier, Hillwood director of communications, said “it doesn’t make sense for us to comment” on the noise study because an update is already under way.

The Federal Aviation Administration doesn’t require airports to perform noise studies, but if studies are requested, the FAA helps pay for the research and any improvements deemed necessary by the findings.

“I’ve been here four years. It hasn’t been a topic of discussion,” she said.

The lack of information makes it impossible for residents to know what they are getting into, Demel said. Most real estate agents don’t know about avigation easements or that the easements can shrink property values by as much as 30 percent because of the noise and potential safety concerns, she said.

Both military and corporate flights bother residents, Demel said. FedEx is a large part of operations at Alliance, sending out about 25 flights a night.

“You get used to the train, but the airplane, when it comes right over at 3 a.m. …” Demel said. “It would help if they weren’t flying so low.” 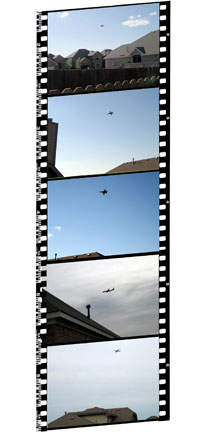 The jet fighters fly so low “it’s eerie,” she said, and the frequency increases on the weekends.

“Alliance has brought a lot of money and growth to the area, and they’ve looked at some of these issues, and they are working on solving some of the problems, which we are grateful for,” Demel said. “But having them be a good neighbor is really the goal.”

Military operations are frequent at Alliance Airport because it has a contract with the U.S. Department of Defense to provide fuel for military aircraft. The airport receives local fighter jets from Sheppard Air Force Base in Wichita Falls as well as cross-country deployments from bases farther away.

Over a one-year period ending in July 2008, Alliance Airport hosted 100,031 takeoffs and landings, according to Airport IQ 5010, an online database of airport records. Of those, about 13,000 were military aircraft, averaging about 38 operations a day.

Military takeoffs and landings account for about 13 percent of Alliance Airport’s operations compared to 1 percent at Meacham and Spinks airports.

The military is exempt from rules governing other aircraft, but the “Pentagon does have a robust program to help mitigate problems,” said Dennis McGrann, executive director of NOISE, the National Organization to Insure a Sound-controlled Environment, a community-based group affiliated with the National League of Cities. “It doesn’t mean the military doesn’t have any sensitivity to those issues. They make strides to be responsible citizens and neighbors to the community. But they operate under constraints.”

California requires real estate agents to disclose the amount of noise in areas near airports, McGrann said, and other state and local governments have disclosure laws as well. McGrann said the best solution is to plan the airport and surrounding areas well enough that residents aren’t living under noisy airspace. But that seldom happens, he said.

Dulles International Airport near Washington, D.C., is a good example of planning, McGrann said. Community and airport officials worked together to create zoning rules for residential areas. In some areas, residences are banned.

“We think that’s a model for the country,” he said.

Low-flying planes may also affect more than residents’ sense of calm. Aircraft noise can have long-term impacts on a home’s structure, perhaps even damaging a house’s foundation if the volume and frequency of sound are high enough, McGrann said.

Jason Lamers, spokesman for Moncrief, said the city is working with the FAA to update the 1995 noise study of Alliance, which might affect problems in the community. He expects a plan to be drawn up based on the report and presented to the city council by the end of the year.

“Alliance Airport wants to be a good neighbor to those residents who have decided to move into the surrounding area,” Lamers wrote in an e-mail.

The new report will be published in the next few weeks, said Dan Botto, a noise consultant working on the study. Botto said the update predicts lower noise levels in coming years because older, noisier planes are being phased out by FedEx. The update does not address the possibility of noise affecting foundations.

“Maybe that’s something that needs to be added to the report,” he said.

Botto also said it is impossible to predict military use of airspace and that the number of military jets flying out of Alliance may not decrease any time soon.

“The important part is how we help the residents deal with it,” he said. “There’s no way to perfectly forecast this. … The important thing is that both sides continue to work together.”

LaRose said he’s tired of frequent jet flyovers waking up his son, who is nearly two years old, and making him cry.

“It gets to the point where we should look at moving someplace else where it’s quiet,” LaRose said.