Two years ago I observed that there are many different ways to make a Harry Potter movie, thanks to all the different directors who’ve adapted J.K. Rowling’s novels to the big screen. That proves true yet again in Harry Potter and the Half-Blood Prince. The sixth chapter in this ever-changing series is altogether distinct from any of the other five, and it’s also a significant and reassuring improvement on its immediate predecessor, Harry Potter and the Order of the Phoenix.

Oddly enough, the same director – David Yates – helmed both of the aforementioned films. Maybe the restoration of Steve Kloves to screenwriting duties after he took a hiatus for the fifth movie is responsible for the change. (Certainly his sense of humor is good to have back.) Maybe Yates has simply grown more comfortable in the director’s chair now that he’s gotten his first blockbuster movie under his belt. 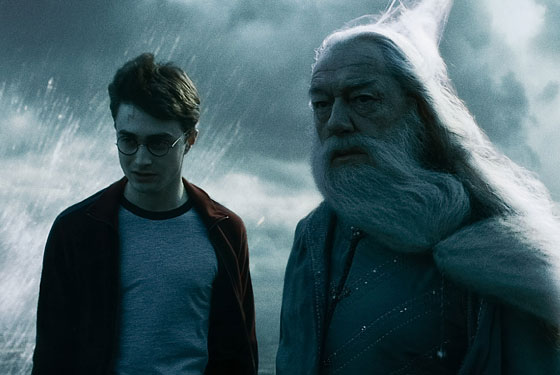 Whatever the cause, he uses the 153-minute running time judiciously, allowing the movie to breathe and doing justice to the capaciousness of the Harry Potter universe. Both Arthur Weasley (Mark Williams) and Remus Lupin (David Thewlis) put in meaningful appearances when the young wizard goes to them for advice. Yates and new-to-the-series French cinematographer Bruno Delbonnel also use the length of the film to re-establish the atmosphere of Hogwarts, envisioning the wizarding school as a less colorful and more harshly shadowed place than we’ve previously seen, filled with columns and arches that provide multiple convenient hiding places. This setting makes it easy for characters to eavesdrop on other people’s conversations and creates an invigorating air of paranoia and pervasive mistrust. The film’s deliberate pace in the early going – part of which is surely down to Alan Rickman’s now-glacial line readings as the double agent Professor Snape – is infused with slow-building tension.

That tension comes in large part from the extracurricular assignment tasked to Harry (Daniel Radcliffe) by Professor Dumbledore (Michael Gambon), who does much more hands-on mentoring in this adventure than in the others, for reasons obvious to Potter readers. The key to defeating Lord Voldemort lies with Hogwarts’ new potions professor Horace Slughorn (Jim Broadbent, a beautiful addition), a doddering, weak-willed teacher who shamelessly sucks up to famous, well-connected students like Harry. Under the headmaster’s instruction, Harry has to insinuate himself into Slughorn’s company and uncover the truth that the teacher knows about Voldemort’s past.

There’s sexual tension to go with all the invisibility-cloak-and-dagger dealings. The very first scene here involves Harry flirting not inexpertly with a restaurant waitress (Elarica Gallagher) whom he’ll probably never see again. Rowling’s romantic subplots finally take center stage in this installment, as Harry starts to sort out his feelings for Ron’s younger sister Ginny (Bonnie Wright). Meanwhile Ron (Rupert Grint) enjoys a brief fling with histrionic classmate Lavender Brown (Jessie Cave), to the massive displeasure of Hermione (Emma Watson), who retaliates by dating a swaggering Quidditch player (Freddie Stroma). These are played for broad humor, as in a silently awkward bit when Ron sits between Harry and Ginny while holding a huge tray of pies. Even funnier is a complex, well-managed Christmas party sequence with six or seven elements in play. Yet Kloves doesn’t neglect the jealousy, tenderness, and rage behind these pairings, and the scene between Ginny and Harry in a storage room is sexually charged without jeopardizing the movie’s PG rating. The filmmakers handle these romances with more tact and delicacy than Rowling herself managed.

Yates also conjures up moments that simply suck the breath out of you: a student (Georgina Leonidas) left paralyzed and suspended in midair above the snow, Ginny’s encounter in a clearing with a giant child-molesting werewolf (Dave Legeno), and an eerily hushed set piece in a sea cave (skin-crawlingly reminiscent of The Descent) in which Harry puts a foot wrong and agitates some bad things in the water. On a less supernatural note, the magical shootout between Harry and Draco Malfoy (Tom Felton, who’s aged into a worthy foil for our hero) ends with a sickening thud when Harry hurts the class bully far worse than he intended. And even though we know it can’t be, the movie still convinces us for a few agonizing moments that Ron has died a sudden, horrible death on the floor of Slughorn’s office. For a PG-rated film, this offers up some hard-core stuff.

With all this, the tragic end of Harry Potter and the Half-Blood Prince still doesn’t match the one from the fourth film (Harry Potter and the Goblet of Fire) for piercing emotional impact. Yet as the Harry Potter saga winds to its cinematic conclusion, the remaining two films look to be in good hands, and any movie that works as a spy thriller, love story, and horror movie all at once is pretty remarkable. You might say it takes a fair amount of wizardry.