India Grill Restaurant and Bar looks like most of the other restaurants in the newish part of the Arlington Highlands Lifestyle Center. The eatery has the shiny pendant lights, shiny floor, and earth-toned walls so common in the construction of new places in the area. A quarter of the back is taken up with the steam tables used for the daily buffet (offered during the lunch hours and all day Sunday), leaving 16 cozy tables in front. Eating the pre-selected, convenient, safe buffet of any exotic food is for wimps. So I ventured out on a Saturday evening and found a mixed group of college students, singles, and families all waiting to have their taste buds tingled by Indian food, a pretty rare commodity in this part of Arlington. 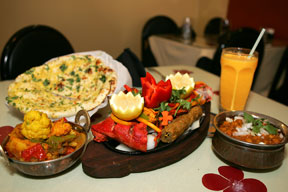 The restaurant starts you off with thin lentil papa bread: deep-fried flatbread made pleasantly zesty courtesy of some secret spices. While you’re perusing the menu you may find yourself munching more than your share, dipped either in the sweet tamarind or the spicy green pepper sauce.

The menu at India Grill is helpfully detailed. Even if you’ve never eaten Indian food, you should be able to find the right level of flavor and heat. The Indian subcontinent is huge and gastronomically diverse, utilizing wheat and rice as well as spicy and sweet herbs, dairy products, and curry (a combination of spices).

India Grill focuses on cuisine from the northern part of India. The restaurant offers a selection from the tandoor, the large, extremely hot, open oven that produces the beautifully crispy, crusty naan bread. We ordered garlic naan, which was scrumptiously buttery courtesy of the garlic-flavored ghee (clarified butter). You might be tempted to fill up on the naan and other breads — there are a dozen from which to choose — so pace yourself.

Two choices from the appetizer menu proved to be a mixed bag. The vegetable pakora, described simply as “mixed vegetable fritters,” was absolutely delicious. The mild appetizer had a wonderful texture and crunch, with a perfectly light batter surrounding cauliflower, potatoes, and other seasonal veggies. The chicken tikka, ordered because it was described as very mild, actually had a spicy curry kick. No heat, but the flavor was definitely strong. Good if you like curry. Not good if you weren’t bargaining for the flavor.

Many Indians are vegetarians, but India Grill offers a surprising amount of beef and lamb choices in addition to veggies and fish. The tandoori shrimp were an odd red color and were served fajita-style on a hot plate. The shrimp were mild and a little rubbery, but the veggies were tasty. The beef Punjabi (named after a region in northwestern India) featured a savory, not-so-spicy sauce with a small amount of potatoes, chunks of garlic and ginger, and dainty meat cubes. The dish looked like a slightly more exotic version of beef stew. The sauce had a sweet, mild heat that kept the only non-exotic food lover at the table happy. As a counterpoint, the lamb in a spicy, tangy, brick-colored Vindaloo sauce was declared “sinus-clearing” — Vindaloo sauce leans heavily on red chili and black pepper as well as other traditional curry spices. The lamb was not gamy or greasy at all, and the dish was terrific, although more potatoes to offset the heat would have been nice.

The meat dishes were beautifully presented in dainty pots along with basmati rice. The service could politely be described as “paced.” It’s obvious everything’s cooked to order. The result is fresh food served on the slow side. The wait for a table increased as the evening wore on. By the time we left, there were at least four groups waiting to be seated. Maybe some of them were inspired by having just seen Slumdog Millionaire at the Movie Grill up the road. Or maybe they were just glad for the culinary change that this small, family-owned restaurant brings to Arlington.