Chalk it up to fate, or astrology, or good genes destined to collide, but it’s not surprising that two of Fort Worth’s best actors would become romantically involved, and then committed partners, and then parents. Justin Flowers, 29, and Dana Schultes, 32, send out very different onstage vibes that complement each other nicely. He’s spontaneous, intense, and very high-wire, distinguishing himself with dramatic turns in shows like Cherry Docs and The Pillowman. She’s cool, ethereal, and able to convey turbulent emotions with the twitch of an eyebrow, as she’s done in Dead Man’s Cell Phone and The Shape of Things.


Both of them cut their professional teeth at Stage West under the tutelage of its founder, Jerry Russell. Schultes currently holds a staff position there as director of development. Lately, Flowers has begun branching out into the very tricky genre of farce, forming a professional association with Circle Theatre and its frequent guest director Robin Armstrong. He performed in last summer’s Unnecessary Farce and is set to open this weekend in Incorruptible, a medieval French romp about a 13th-century monastery that begins trafficking in the stolen body parts of saints. 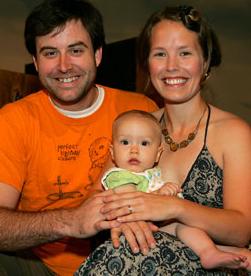 Circle’s executive director Rose Pearson said, “We were lucky to get Justin for this show,” and she’s not just referring to the actor’s in-demand talents. These days, a tiny but very important audience is taking up Flowers’ and Schultes’ attention: their 10-month-old daughter Matilda. The couple’s lives have been a whirlwind of day jobs, nonstop baby responsibilities, and a dedication to theater that finds them alternating shows so one parent can be rehearsing and performing while the other is caring for their child.

“We haven’t really worked out a formal schedule,” said Flowers. “I think we’re going to take a break soon because of the craziness. Every day it seems like Matilda needs new things, new interactions that she didn’t need the day before.”

For her part, Schultes said, “I’m not good at relaxing. You have to make me go on vacation to relax. I thrive on stress.” Noting that her supportive colleagues at Stage West have declared every day to be “bring your daughter to work day,” Schultes said, “Working for a nonprofit is the perfect situation for this new mix of responsibilities. Matilda is a great motivator. She helps me do everything at 100 percent.”

Schultes and Flowers are both North Texas natives, and they both earned bachelors degrees in theater at Texas Wesleyan University, although they didn’t attend at the same time. After graduating from high school, Flowers enrolled in the Marines and wound up becoming a “counter mortar radar” technician, a specialist who works on 30-foot field radar towers that detect the direction from which enemy fire is lobbed. He never took an acting class until he tried one as a lark at Texas Wesleyan — and wound up completing his bachelor’s with a theater scholarship.

“People think it’s supposed to be a black-and-white, left-brain-versus-right kind of thing,” he said of his dual passions for mathematics and performance. “But for me, it all springs from the same place. I spend so much time in my head [with science] that I wind up staying there and analyzing my actions. And then I’m able to repeat them.”

Schultes, on the other hand, was a stage creature from early on, having studied with the esteemed Larry Cure at Arlington’s Martin High School along with area talents like Adam Dietrich and Lee Trull. Cure instilled in her a very hands-on, anti-diva approach to the theater, one that finds her equally at home acting, directing, stage managing, and tending the concession stand. “Larry taught us: ‘If you’re not willing to sweep the floor, then don’t go into the theater,'” she said.

Justin and Dana met when she stage-managed his first show, but the acquaintance didn’t turn serious until they co-starred in a 2003 production of Lobby Hero. Indeed, so intertwined are Schultes’ and Flowers’ lives with the stage — she confirms that it’s the third element of their relationship — that their daughter very nearly made her debut at Stage West. The “gas pains” that a very pregnant Schultes began experiencing last fall, while she and Flowers were offstage performing non-acting duties, turned out to be the start of labor. They got to the hospital for the beginning of what would be a 30-hour ordeal. She had prepared for natural childbirth, but, facing an unusually protracted and painful birth, opted for an epidural. Fifteen hours into labor, she was updating Stage West’s Facebook page via a laptop that Flowers had brought her.

Schultes candidly admitted that not every moment since Maltida entered their lives has been joyful. She admits to sitting alone in the empty theater at one point and crying, wondering, as many professional women with newborns do, if she’d ultimately have to abandon the work that she loves. Although tradeoffs and adjustments are an inescapable part of a working parent’s life, her answer came when she was offered the lead in Stage West’s recent run of Dead Man’s Cell Phone. “Justin had my back,” she said. “He was with her every night while I rehearsed and performed, keeping her on a routine bedtime schedule.”

Schultes and Flowers reserve a small piece of their lives to share with each other, in an arts collaboration of a different kind. Schultes coordinates and produces and Flowers acts as host for This Week in the Arts, a weekly 15-minute podcast featuring interviews with North Texas arts luminaries like Arts Fifth Avenue’s Gracey Tune, Lyric Stage’s Steven Jones, and Fort Worth collector Harriet Kelley.

At the moment, it’s Schultes’ turn to care for Matilda while Flowers completes his commitment of four performances a week in Circle Theatre’s Incorruptible. “After August 15 [the show’s closing date], we’re going to take a vacation and then take the rest of the year off,” Flowers said. For her part, Schultes isn’t so sure she can stay away from the stage that long. “Yes, we’ll take the rest of the year off, except for this part that might come up in the fall,” she said with a laugh.