The smartest, most original romantic comedy in the last five years, (500) Days of Summer first catches your eye through the unusual typography in the title. The parentheses refer to the story’s nonlinear structure. As the narrative shuttles back and forth in time, an onscreen counter indicates in parentheses how many days have elapsed since Tom and Summer (Joseph Gordon-Levitt and Zooey Deschanel) met as co-workers in a Los Angeles firm that produces greeting cards. 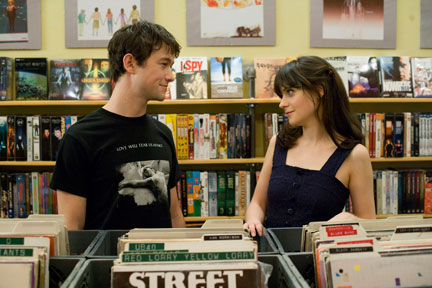 The film begins on Day 290, when Summer suddenly breaks up with Tom, but most of their 16-month relationship unfolds in a fairly chronological fashion, showing the rapturous beginning of their courtship while occasionally flashing forward to the dismal run-up to and aftermath of Day 290, usually for deflating comic effect. Tom, an aspiring architect who believes in love at first sight and romantic destiny, immediately knows that Summer is the girl for him. Said girl, on the other hand, thinks love is illusory and announces from the start that she doesn’t want to be anyone’s girlfriend. No matter how happy they are, there’s always an undercurrent that makes Summer pull away from this guy, who wants more from her than she can give.

The two leads make an appealing study in contrasts, as the spiky, pleasantly tart Gordon-Levitt turns out to be a perfect match for the demurely deadpan Deschanel, who has had trouble finding co-stars who can play off her in romantic films. He does most of the dramatic heavy lifting in this movie, but her teasing manner brings out a lightness and playfulness in him that he hasn’t revealed in his adult roles. (She also gives him a ravenous look after an initial makeout session in the office copy room that is deeply sexy and funny.) The film is a showcase for Gordon-Levitt, who’s building a fascinating career that hasn’t yet won him the exposure of less talented actors his age. Exuding charm in the early going, he also finds comedy in an embittered and depressed Tom in the latter stages. (I like the way he renders Tom’s anger after a fight with Summer, transmuting itself into an exaggerated “after you” gesture when his path is blocked by two strangers.) The two leads have great comic rapport, and they also generate some spellbindingly intimate moments, as when Summer finally lets Tom see her apartment and some of her innermost thoughts.

The movie’s distinctive style comes from first-time filmmaker Marc Webb (a music video director), who injects the movie with tangents, rhetorical excess, bits of surrealism, and a stuffy voiceover narrator who tries to describe Tom and Summer’s relationship through dry, irrelevant statistics. Some of the humor is too cutesy, like the groan-worthy pun that ends the film or the romantic advice offered by Tom’s precocious little sister (Chloë Grace Moretz). There are some diverting sequences that dead-end, too, like the newly broken-up Tom imagining himself as the protagonist of a Bergman film, complete with cinematic references to Persona and The Seventh Seal.

Far more often, Webb’s nonrealistic storytelling devices bring out the angst and tension in this relationship, notably with a split-screen when Tom attends a party at Summer’s place, thinking that she’s ready to take him back. Different scenarios play out on the halves of the screen, one labeled “Expectations” and the other labeled “Reality,” and the gap between them is devastating. (So is the use of Regina Spektor’s relentless minor-key ballad “Hero” in the background.) Instead of a histrionic outburst, Tom’s emotional breaking point is conveyed with the city around him turning into a pencil sketch that’s then erased.

The soundtrack of the film is stocked with an excellent mix of present-day hipsters (Doves, Feist, Black Lips), classic sounds (The Smiths, Simon & Garfunkel), and pieces of pure cheese. (The only slightly ironic use of Patrick Swayze’s “She’s Like the Wind” is good for a fair-sized laugh.) The songs are complemented by Mychael Danna and Rob Simonsen’s score that incorporates whistling to create the film’s ethereal, whimsical mood. The unquestioned musical highlight comes on the morning after Tom first sleeps with Summer, when his triumphant walk down the street bursts into a full-fledged dance number (set to Hall & Oates’ “You Make My Dreams”) that’s the most deliriously joyful thing in any movie this year.

That’s worth the admission price by itself, and (500) Days of Summer offers much else to savor, from the performances of Geoffrey Arend and Matthew Gray Gubler as Tom’s friends to the luscious cinematography of Eric Steelberg, who gives the city of Los Angeles a soft enticing glow. What holds this floating movie in place is its insight into the mysteries of coupling and uncoupling. Tom and Summer share many similarities and interests, but the movie demonstrates how even people who are this compatible can be wildly out of sync with each other. The merciful, bittersweet wisdom on display here does more than make Hollywood’s current romantic comedies look stupid and ugly. It places the movie in the exalted company of Annie Hall and Eternal Sunshine of the Spotless Mind, comedies that use distancing techniques to peer deeply into the human heart.