Rob Williams is not related to the British pop singer Robbie Williams, though some people do confuse the two of them. “I get phone calls for him all the time,” said the TCU graduate who now lives in the Los Angeles area. “They’re always excited English girls on the other end of the phone.”


The filmmaker returns to Fort Worth on Wednesday, not to sing “Millennium” but to present his comedy Make the Yuletide Gay at Four Day Weekend Theater through the auspices of Q Cinema.

Born in a small town in West Texas, Williams knows Fort Worth 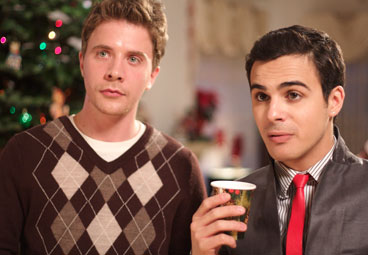 from having obtained a degree in finance from TCU in 1989. (He went on to earn his M.B.A. in marketing at UT-Austin.) He’s looking forward to revisiting, saying “I don’t get back to Texas much.”

Having worked in public relations for some years in L.A., Williams fell into directing quite by accident. He only dreamed of being a screenwriter, but while attending a scriptwriting workshop with his life partner Rodney Johnson, the light bulb went on. “We turned to each other and just said, ‘Let’s do it,’ ” Williams remembered. “It” turned out to be Guest House Films, the production company that he and Johnson have used to make three features, all self-financed and written and directed by Williams. Running a business with the man he’s lived with for 15 years has become a finely tuned operation. “We have a good system,” said Williams. “Rod is very organized. He’s the one who deals with locations, crews, the Screen Actors Guild. I’m more about writing, dealing with the director of photography, and postproduction.”

Make the Yuletide Gay, Williams’ latest film, was partly inspired by two actors who’ve worked with him before. “Kelly Keaton and Derek Long met at one of our parties, and they discovered they were both from Wisconsin. They started talking to each other in these heavy accents, and I thought these would be two great characters to build a film around.”

Keaton and Long portray parents of a gay college senior (Keith Jordan) who has yet to come out to them as he visits them for the holidays. An unabashed fan of all stripes of Christmas movies, Williams found few Christmas-themed entries in the field of gay cinema and saw an opportunity to carve out a distinct niche. He made his film without sex, nudity, or profanity, envisioning the project as a family movie. “Kids always hide something from their parents,” he said. “I think that’s a universal thing.”

The movie is scheduled for a DVD release in November, and Williams is trying to work out a brief theatrical run beforehand. Noting that every screening of Yuletide has inspired questions from the audience about a possible sequel, he’s optimistic about the movie’s prospects. He’s also filming a music video for Jake Monaco and Jen Hansen, who wrote and performed a number of original songs for the soundtrack of Yuletide. His next project is an adaptation of Jim Tushinski’s novel Van Allen’s Ecstasy, whose themes of obsession and madness mark a change from Yuletide‘s light farce. While Williams would eventually like to make mainstream movies, he’s committed to staying true to his roots. “There are more gay characters on TV, but they’re never the lead in movies except in historical pieces like Milk,” he said. “We want to tell stories about gay people that we haven’t seen yet, and there’s a market that’s hungry for that.”