The title of Adam refers to Adam Raki (Hugh Dancy), who suffers from Asperger’s Syndrome. If you don’t know what Asperger’s is, this well-intentioned but unsatisfying drama does a fair job of introducing you to the condition. (Adam himself describes it as a “high-functioning form of autism,” though there are some medical authorities that differentiate this from autism.) Adam is highly intelligent when it comes to astronomy and the design of computer chips, yet in social situations he either clams up or – if the conversation turns to a subject that he knows – pours forth a torrent of facts until he’s stopped.


His tendency to take everything literally means that conversational irony and humor are lost on him, and his honesty is off-putting as often as it is disarming. When someone makes an appointment with him at “eightish” and then keeps Adam waiting until 8:13, he finds it excruciating. He’s pretty cute, no doubt because he’s played by Hugh Dancy, but he’s nevertheless poor relationship material because he’s unable to process emotions, either his own or others’. How do you make such a closed-off character the lead in a romantic film? That’s a formidable challenge, one that an enterprising film should be tackling. Sadly, this movie isn’t up to it. 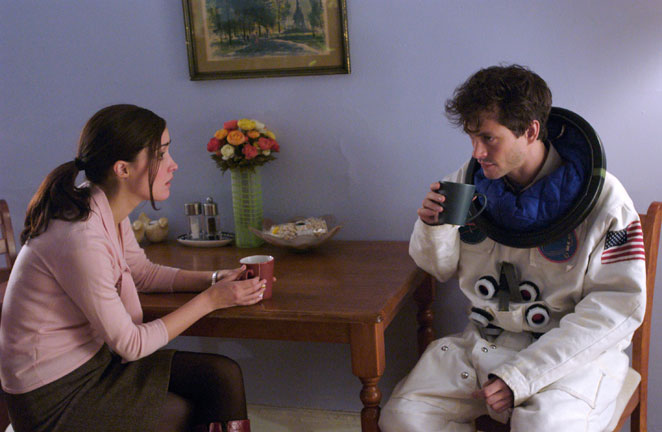 The story begins with Adam losing his entire support network in the space of six weeks when his father dies and he’s downsized from his job as an electronics engineer at a toymaking company. In the midst of all this, a new neighbor moves into the apartment upstairs from his: Beth (Rose Byrne), a schoolteacher who aspires to write children’s books one day. The relationship that develops between them isn’t the steadiest one. He’s looking for a new peg to build his life’s routines around, and she reciprocates when her own wealthy family goes through an upheaval.

The film is written and directed by Max Mayer, a New York theater director who has worked sporadically in movies and television. His theatrical roots fit the material in many ways. Mayer is clearly comfortable with the film’s New York setting and the action being confined to the few small rooms in which Adam spends his highly regimented life. The filmmaker isn’t averse to using the Asperger’s for comedic purposes, such as when Adam goes to elaborate lengths to squeegee the windows on Beth’s apartment. On the whole, however, the filmmaker treats Adam’s condition seriously, pointing up the inconvenience of it on several occasions and even showing Adam trashing his room and hurting himself during his most stressful moments. Conscientiously, the film insists on the disorder’s permanence and intractability, never letting us think that falling in love will somehow cure Adam. (This is a trap that too many such movies fall into, most notably A Beautiful Mind.)

Yet as solid as its concept is, the movie never soars. Adam’s mind works in a fundamentally different way from most other people’s, and Mayer never reaches beyond dialogue and the other characters’ reactions to Adam to convey that. A more imaginative director – say, Darren Aronofsky or Spike Jonze – would have found a way to express the workings of Adam’s brain in visual terms, showing us the world falling into the patterns that Asperger’s patients tend to see much more clearly than people who don’t have it (called neurotypicals or NTs for short). The closest Mayer comes to getting inside Adam’s head is the early scene when Adam shows Beth the planetarium that he’s made out of his living room, a moment of genuine beauty and wonder. Still, the rest of the movie stubbornly remains observed from the outside, and that keeps us from finding out what it truly is to be in Adam’s shoes.

Under these circumstances, any actor would be hard pressed to play a part such as this and make it seem like more than a stunt. Dancy can’t transcend the film’s limitations, though he gives an understated and technically keen performance in the title role. (As for his leading lady, Byrne is an inert presence here like she usually is.) Adam is a frustrating experience, because you can see the heartwarming romance and the humane portrait of mental disorder that it so badly wants to be. It falls agonizingly short.