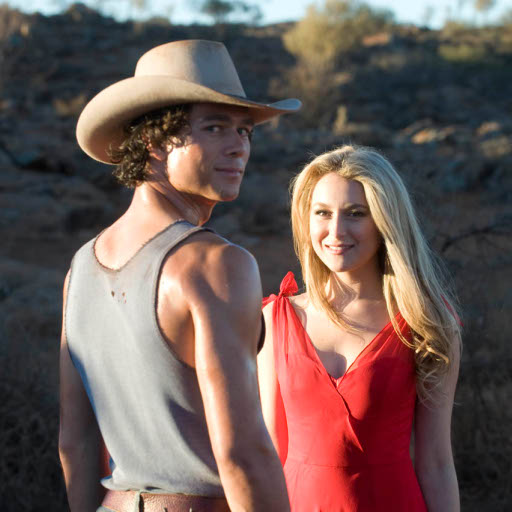 The earnest and completely uninventive Australian drama Broken Hill is about Tommy McAlpine (Luke Arnold, an Australian TV star who strongly resembles Adrian Grenier), a teenager who dreams of becoming a composer as he grows up in a dusty outback town called Willyama. His big break looms when the Sydney Conservatorium of Music expresses interest in having him as a student, but that becomes complicated by his infatuation with Kat (Spy Kids‘ Alexa Vega), an American girl at his school who entices him into some acts of petty vandalism.

They’re caught and sentenced to community service, which inspires Tommy to volunteer both of them to teach music to inmates at the local prison. Seeing a chance to make his punishment work for him, Tommy sets about trying to get the prisoners to perform his audition piece for the music school during the prison talent show in the nearby city of Broken Hill, New South Wales.

The writer-director here is Dagen Merrill, whose one previous filmmaking credit is the 2007 horror flick Beneath. The movie starts out promisingly enough, with some funny banter between Tommy and his paraplegic best friend (Rhys Wakefield). However, the story quickly devolves into the usual tropes about realizing your dreams. The prisoners aren’t strongly characterized or funny, and they turned into a well-oiled musical ensemble in an absurdly short space of time – we’re supposed to believe that Tommy gets his piece performance-ready in three weeks of rehearsal. We’re also supposed to believe that Tommy manages to juggle his musical efforts with his farm chores and his duties as a football player with no trouble. (Note: When Australians say “football,” they mean the Australian rules version of the sport.) Particularly stale is the subplot between Tommy and his sheep rancher/football coach dad (Timothy Hutton, miscast as a rugged man of the outback), who wants to keep his son at home because his own dreams of athletic glory were dashed in the big city.

Broken Hill climaxes with a performance of Tommy’s magnum opus in Sydney, and all the movie’s shortcomings would matter a lot less if it had some insight about music. Sadly, the fantasy sequences with Tommy surrounded by imaginary orchestral musicians in the outback or on the football field don’t tell us anything about the nature of musical inspiration. The same goes for Tommy’s conversations about music with Kat, the inmates, and his music professor (John Clark), which for all their length leave us with no clue as to what music means to the young man. Film and TV composer Christopher Brady is tasked with the music here, and though the splashy piece he comes up with for the end has a recognizable Australian flavor (there are didgeridoos involved), it sounds like the background score of a sports highlights video rather than the arrival of a teenage Gustav Mahler. In a way, that’s a fitting capper to this movie whose setting is the only distinctive note in a boilerplate story.