Man, was I looking forward to this. A CGI movie about live rag dolls fighting terrifying junkyard robots in a post-apocalyptic future? Sign me up. Different and darkly atmospheric, 9 didn’t quite look like it would be for everyone, but it did look like a potential cult classic. Unfortunately, it’s an empty movie in which the only things thinner than the plot are the characters. The 80-minute film is held together only by the astounding visuals (more on them later), but then even only barely. 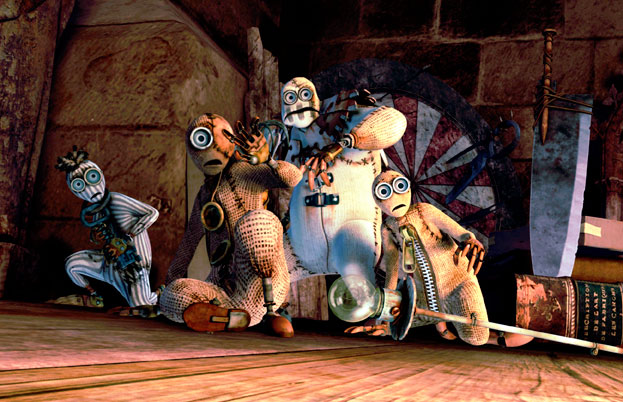 The movie opens with plenty of atmosphere: eerie music, the sound of wind blowing, and the heavy suggestion that mankind has become extinct. A rag-doll-like being about nine inches tall and made of burlap, metal, and wood comes to life in a rundown lab to find his human maker dead on the floor. Unable to speak and unsure of who or what he is, “9” (voiced by Elijah Wood and identified by the number on his back) stumbles outside into ruins: buildings shattered and the sky a hazy brown, with no sign of plant life and with dead human bodies scattered about. He eventually joins a colony of his kind led by the strict 1 (voiced by Christopher Plummer). But the machines that destroyed humanity are reawakening and coming for 9 and his comrades.

It’s just too bad the story never makes good use of this cool setup. Perhaps the characters are to blame. They don’t speak much, don’t have much personality beyond a few idiosyncrasies, and don’t interact dynamically, leaving the viewer with little to care about.

The voice actors don’t help much, either. Wood doesn’t bring much spirit to 9, though in the actor’s defense he doesn’t have much to do other than react to what’s thrown at him, and as 7, the huntress, Jennifer Connelly is wasted. Worst of all perhaps is that Crispin Glover, weirdness personified, can’t get much mileage out of his character, even though the doll looks a lot like him.

Some of the other actors fare a little better. Martin Landau brings some curiosity to 2, and John C. Reilly adds nervousness to 5. Plummer comes across best but probably only because he’s playing the stock “old wise man” character.

The visuals redeem the movie a little. I guarantee you’ve never seen a movie like 9, computer animated or otherwise. From the haunting desolate cityscape to the designs of the characters and killing machines, there’s a lot of cool stuff to marvel at. The rag dolls look like a mix of Sackboy from the video game LittleBigPlanet and Ray Harryhausen’s armature skeletons and are a glory to watch, with their camera-shutter eyes and spindly hands. As the mute twins who catalog the post-human world, 3 and 4 have eyes that flash like old-timey movie cameras. Each doll is visually different enough to distinguish it from the others.

The evil robots don’t disappoint, either. The ragged beasts that hunt the dolls look as if they were Frankenstein-rigged out of junk, and the mobile architecture of the huge war machines incorporates the tripods from Spielberg’s War of the Worlds and H.G. Wells-ish/steampunk-style robots. The coolest of all might be the “cobra” beast, whose spiked neck supports a broken baby doll’s head.

The bad news is that the grandeur of the visuals begins to look normal after about 20 minutes, leaving viewers with way too much time to consider the film’s many failings.