I saw Bright Star a month ago and was bored by it, but the rapturous reviews Jane Campion’s biographical drama has been receiving in other quarters made me go back last week and see it again. Sure enough, a second viewing (with the help of a better projection system) turned me on to the film’s many admirable qualities. All the same, near the end, I noticed myself sinking down into my seat again, impatient and feeling like the movie’s romantic story was going on somewhere above my head. I think I’ve figured out why. 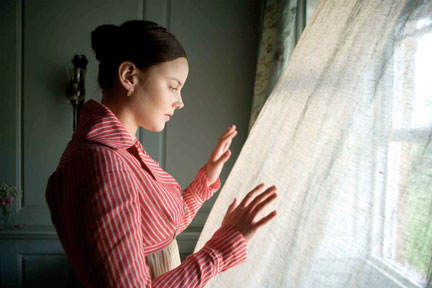 The story begins in 1818, when the poet John Keats (Ben Whishaw) and his boorish friend Charles Armitage Brown (Paul Schneider) move into a new house in the village of Hampstead outside of London. The eldest daughter of the family living next door, Fanny Brawne (Abbie Cornish), initially doesn’t think much of these  slackers who sit around all day  waiting for inspiration to strike. As she points out, she makes more money from her sewing than the poets do with their writing.  Her skepticism falls away when she reads the opening lines of Keats’ Endymion. She falls for the man who wrote those words, and he in return writes her some magnificent love letters as well as the poem that gives the movie its name. However, their romance remains unconsummated, due to his inability to earn enough to support her and then because of his death from tuberculosis at age 25.

The film takes much of its story and its historical detail from Andrew Motion’s recent biography of Keats, to which Campion adds her own layer by positing Fanny as an artist in her own right who expresses herself through the elaborate costumes she sews for herself (designed by Janet Patterson) in shades of pink, red, and magenta that clash with the drab outfits of Keats and his male friends. The dresses are part of the eye-catching visual scheme that Campion and cinematographer Greig Fraser impose on the movie, which includes a shot of Keats lying supine in a treetop looking at the sky. Extensive excerpts from Keats’ poems and letters are read, too, though as much as I appreciate hearing good actors recite great poetry, it doesn’t make as much of an impression as the music by Mark Bradshaw, who composes a breathtaking piece for male chorus that Keats joins in on.

Campion chooses her lead actress very well in Cornish. The apple-cheeked, rosy-lipped Australian isn’t the most distinctive beauty, a fact that she uses to her advantage when it comes to playing a wide range of roles. If you saw her as the blonde small-town Texas girl in Stop-Loss, you’ll be amazed at the metamorphosis she undergoes here to become the dark-haired, poised young Englishwoman who radiates confidence even when she’s admitting her ignorance on a subject such as poetry. She strikes up a nice rapport with Whishaw (who makes for a playful John Keats) but attains a sort of tragic grandeur by the end.

Almost as vibrant a character is Fanny’s 6-year-old sister Toots (Edie Martin), who steals an early scene in a bookstore when she orders a copy of Endymion for Fanny. “My sister knows the author, and she wants to know if he’s an idiot or not.” That notwithstanding, the role is mostly silent, yet we’re always conscious of this presence at the edges of the frame, taking in what’s happening around her while wrapped up in her own thought. Campion doesn’t get enough credit for her ability to characterize children; the ones in her movies always feel real.

For all the suggestions that Fanny is more modern than her 19th-century setting, she’s pigeonholed into a plot that doesn’t allow her to have any impact on the story’s direction. Fanny remains a frustratingly passive partner in the romance, even when Brown tries to keep her away from Keats out of concern for the poet’s health. She leaves it to Keats and Brown to argue it out in a field (a stilted scene) over whether her love is real, and though she’s perhaps too overwhelmed in that moment – or restrained by the decorum of the time – to defend herself, it’d still be good to see her confront Brown on this point the way she does about his refusal to travel to Italy with Keats on his final voyage.

The material cries out to be treated as an operatic doomed romance, and the actors (especially Cornish) seem primed for that. The director, on the other hand, keeps a cool, determined distance from everything. While Campion has never been a filmmaker who plunges in with both feet, her approach means that this story’s momentum slows and eventually comes to a full stop as the poet becomes ill. Though this movie bears little resemblance to a standard-issue Merchant Ivory costume epic, the emotionally muffling effect remains curiously the same. For all the actors’ efforts, the lovers in Bright Star remain as frozen in place as the ones on Keats’ Grecian urn.