Remember two weeks ago when I said Jennifer’s Body was the funniest horror movie since Shaun of the Dead? I was too quick on the trigger. Zombieland bears a much stronger resemblance to Edgar Wright’s 2004 gem. Then again, because Zombieland takes place in a world where the zombies have already prevailed over humanity, it might be better to compare this to other post-apocalyptic movies like Children of Men and Terminator: Salvation and the upcoming The Road.


Not many movies think to play the end of civilization for laughs, but this one does it marvelously. Whichever way you slice it, this comedy is a perfect piece of Halloween entertainment, and if you like your scary movies laced with humor as I do, you’re in high clover these days. 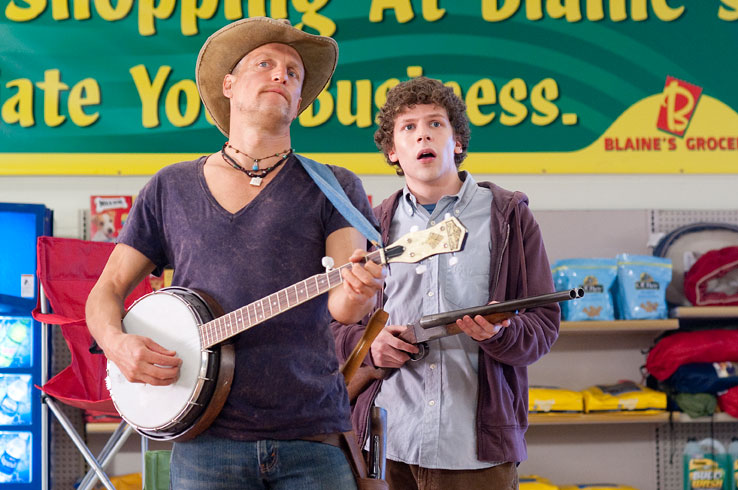 Our unnamed hero (Jesse Eisenberg) is an Austin resident whose paranoid shut-in lifestyle helped him become one of the world’s last surviving humans, though it’s been some time since he abandoned his apartment. We first see him in Garland, Texas, narrowly escaping death in a public restroom, on a trip east to check on his parents in Columbus, Ohio. Forced to ditch his car, he’s picked up on the highway by the driver of a specially outfitted truck, a badass redneck (Woody Harrelson) who avoids emotional attachment to people by refusing to learn anyone’s name. Calling himself Tallahassee, the redneck bestows the name Columbus on our hero, and the two quickly start rubbing each other the wrong way. They’re kept together by their encounter with two sisters (Emma Stone and Abigail Breslin) who turn out to be con artists, stealing the guys’ guns and transportation and heading in the opposite direction. As Tallahassee chases them down – naming the girls Wichita and Little Rock in the process – he and Columbus come to see that sticking together might be everybody’s best chance for survival.

This is a fiercely original filmmaking debut for director Ruben Fleischer as well as for the screenwriting team of Rhett Reese and Paul Wernick, whose background is in reality TV. Their darkly satiric voice is evident in the movie’s delightful slow-motion opening credits montage, which features zombified strippers, end-of-days cultists, and a father-son team at a three-legged race being chased by three-legged father-son zombie teams. (There’s also a cheeky nod to Spike Jonze’s “California” music video.) There’s a great running gag built on Columbus’ set of more than 30 rules that he lives by in what he calls Zombieland. They include: Do lots of cardio training, check the back seats of cars, and shoot the zombies twice to make sure they’re dead – and every time one of these comes into play, words appear on the screen citing the rule.

The comic invention spreads to the frequently gruesome action as well, as the filmmakers devise myriad ways to kill zombies that variously involve a banjo, a pair of gardening shears, and an amusement park ride. One gag has an old lady pulling off a zombie kill that’s straight out of Wile E. Coyote’s playbook. All this shows you how creatively barren most other zombie movies are (say, the Resident Evil movies) when it comes to this simple element. Encouragingly, the jokes don’t stop coming during the movie’s few zombie-free stretches, like the snippets of conversation when our four characters are driving down the highway or late in the film when they reach Beverly Hills and hole up in Bill Murray’s mansion. Murray does make an appearance here, but the nature of it is far too good a joke to give away.

The actors know exactly how to play this tricky material, and Breslin’s centered seriousness of purpose makes her an uncanny fit for a role where she’s blasting zombies with a shotgun. The real ace, though, is Eisenberg, whose beta-male neuroses are much more amusing in this context than in The Squid and the Whale; watch the delicate little gesture he uses to end a Mexican standoff between himself and Tallahassee when the two first meet. The actors are given unusually complex emotions to play, too, because even with all the hijinks, the filmmakers don’t forget about character development. There’s great friction between the highly phobic Columbus, who’s unable to do much without extensive planning, and Tallahassee, who’s willing to risk his neck for one cellophane-wrapped cake from the world’s dwindling supply of Twinkies. The inevitable romance that develops between Columbus and Wichita is fired by the welter of trust issues on both sides.

That leads us to one more movie comparison, if you can stand it: This movie bears a strange resemblance to Pixar’s Up. Like the hero of that film, Columbus has to lose everything before he learns the value of connecting with other people and sharing his life with them. If zombie horror flicks are actually about one’s fear of the general population, this one is about a young man overcoming his fears so he can find his place in the world. That helps make Zombieland one of the best movies of the year, as well as one of the funniest.