So Chow, Baby headed off two weeks ago on its latest International Cuisine Research trip – but unfortunately for cabrito-studying purposes, on Day One it fell instantly in love with comida costeña, the foods of the southern Caribbean coast, and so spent its entire time in the über-charming seaside town of Cartagena, Colombia, without even a single excursion southward into the Andes as originally planned. Thus no goat for Chow, Baby, but its research budget of 652,619 Colombian pesos (CoP) was not wasted. Oh no. 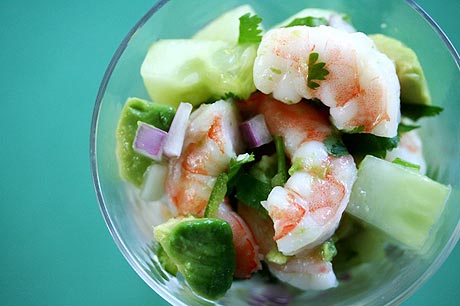 In Cartagena, Chow, Baby quickly became a regular at two killer ceviche places. At the touristy La Cevicheria, a huge bowl of shrimp with mango, passion fruit, and garlic butter went for 30,000 CoP (about $15), though apparently it cost much less before Anthony Bourdain featured this place on his TV show a couple of years back. At the other, a street cart just outside the walls of the 500-year-old center city, a large go-cup of big, pink-sauced buggers costs just 6,500 CoP, but the cart vendors stock only water and Coke, no basil mojitos (11,000 CoP back at La Cevicherria; Chow, Baby’s Spanish wasn’t up to negotiating quantity discounts). Where to get such great Latin seafood here? Why, let’s check the Weekly‘s handy Best Of issue: And the mariscos winner was … La Playita, with two locations, and you know Chow, Baby’s hitting the one in La Gran Plaza (4200 S. Fwy.), a.k.a. no-offense-intended Mex Mall, an instant space warp to Latin America. You can buy your mariachi outfits here!

Indeed, though La Playita’s buggers were perhaps not as sea-popping-fresh as you get when the sea is two blocks away, the cocktel de camaron (chico, $6.95) was mighty satisfying, with bits of avocado cooling the zesty cocktail sauce. And when La Playita’s shrimp were dressed with just a garlic sauce (camarones al mojo de ajo, $9.95), Chow Baby could almost taste the Caribbean. With that, all Chow, Baby had to do to keep its “I’m still in paradise, not in a Fort Worth mall food court” fantasy going was to call out “Buenas!” to random strangers (who said it back; how nice!) and walk with its back to the Royal Yogurt shop. At La Media Naranja‘s juice and tortas stand (there’s a larger, sit-down location at 961 Magnolia Av.), Chow, Baby had a papaya shake ($3) as tropical-tasty as the fresh-fruit squeezings it had relished in Colombia. Although some of those South American botanicals may not technically have been fruit; the innards looked more like alien babies in gelatin. But all were quite delicious. Well, most were.

El Pollo Regio, Chow, Baby’s last stop on the way out of Mex Mall, provided a hearty dinner: half a pollo asado al carbon (with rice and beans, $7.99). Down to the capper of half a roasted onion, Regio’s grilled chicken is just like you get in Colombia’s al fresco pollo-eries – a guy and his grill staking out a corner in a saint-named pocket park (quarter pollo, 4,000 CoP). Ooh, another interesting similarity … but no, Chow, Baby has so many more vacation slides to show you, this will have to be a two-part episode. Next week: The people, climate, and architecture of Colombia, plus – for those of you who don’t keep track of Chow, Baby’s idiotic grudges – why it’s so keen to eat goat in South America.