A locally owned joint with a spartan menu featuring fresh, seasonal, and local cuisine from an old gas station — sound familiar? Familiar, with a twist. Ellerbe Fine Foods is upscale/down-home and decked out like a little cottage. Or “in French provincial style,” according to my dining companion, the art history major. Executive chef Molly McCook co-owns the restaurant along with local restaurateur Richard King, and both hail from Shreveport, La., where French provincial and down-home country routinely meet head-on. The restaurant is named after the Shreveport street where McCook’s grandmother lived.


Regarding the menu: Ellerbe’s staff uses fresh, seasonal items. Not necessarily down-the-street local — for instance, the mussels, clams, and halibut don’t come out of Lake Worth — but fresh. And the menu changes from day to day to accommodate what’s in season. 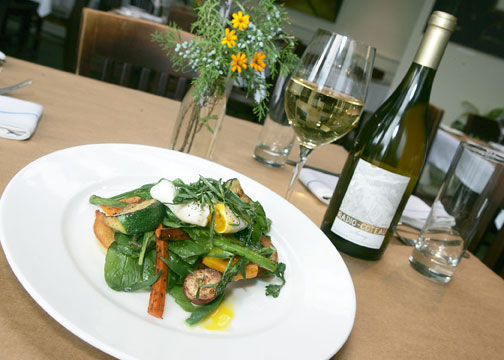 The appetizer menu can generously be described as petite. But a few dishes cooked perfectly beat a giant menu full of freezer-bag foods. The plate of artisanal cheese and charcuterie featured dainty portions of a Spanish cheese, French brie, and the moldiest blue cheese you may have ever seen, all artfully arranged along with the unusual boar sausage, Italian ham, and some lovely, smoky, crisp bruschetta. In the center of the dish were three perfectly house-cured olives, each redolent of rosemary and mild herbs. The server said that because the olives are house-cured, they aren’t as briny as traditional green or kalamata olives. Even if you’re not a fan of salty, cured foods, all of the items — some made in-house, some seasonal and fresh from other places — were delightful.

The roasted cauliflower soup with brie crostini and a drizzle of truffle oil was served lukewarm and, sadly, needed salt. Fortunately, the thin slices of sourdough bread served along with the appetizer course were accompanied by grainy, red, Hawaiian sea salt.

The New Orleans style shrimp po-boy was a layered delight of flavors. The baby shrimp were delicately battered in a salty, peppery cornmeal, rendering them crispy and not greasy. Ellerbe uses the traditional Louisiana-style sandwich bread: crunchy on the outside, impossibly light on the inside. The bread, according to a server, comes from Louisiana, where the high humidity apparently causes an actual chemical change in the flour. Or the yeast. Or both, I wasn’t sure. The bun will leave a trail of crumbs on your lap, and you probably won’t care. The sandwich came dressed with aioli plus tomato and lettuce. You might want to skip the accompanying smoky house-made chips. They were tasty but not fabulous.

The grilled venison burger – made not with venison from any old whitetail or mule deer but exotic axis deer – arrived perfectly moist and medium-rare on a slightly less crumbly bun. The Brazos Valley blue cheese on top added a lovely, pungent punch. The (fabulous!) french fries were dotted with shards of fresh herbs: rosemary, parsley, and maybe some thyme.

But the sautéed wild Alaskan halibut with summer maque choux and Louisiana crawfish was the winner-take-all dish. The corn maque choux (pronounced “mock shoe”) is a simple summer vegetable dish, but McCook’s recipe is sumptuous. The buttery sweet corn, onion, and spices, along with tomatoes, made a brilliant accent to the slightly lemony baked halibut. In an upscale, down-home place, licking your plate is probably still considered rude.

Though the appetizer portions were small, the main dishes were filling, leaving barely enough room for dessert. Fortunately, the chocolate pot de crème — a teeny-weenie cup of the densest chocolate of all time slathered in mocha sauce — was just the right amount with which to end the meal. Heavier than a mousse, lighter than a pudding, the delicacy was simply wonderful. Maw Maw’s bread pudding, from a recipe reportedly handed down from McCook’s grandmother, was a brick of crispy-chewy goodness, unadorned by needless raisins or currants. The accompanying whiskey sauce was fairly stiff, perhaps enough to knock a lightweight onto the glazed concrete floor.

Ellerbe’s wait staff, cooks, and front-of-the house staff are all knowledgeable, charming, and full of helpful recommendations. The hostess saw my dining companion’s black pants and promptly proffered a black napkin in place of the charming white dishtowel with the blue stripes that matched the white tablecloths and whitewashed brick-and-wood walls. Our server Frank mentioned that Ellerbe’s had been raved about “by Chow, Baby — you know? The columnist.” Turns out, he had worked his magic on Chow, Baby when the columnist, fortified by a margarita from across the street, visited. For the record, even in the hard light of day, Frank was just as charming and smart as Chow, Baby intoxicatingly thought he was. (“Noooo Reservations,” July 22, 2009.)

At some point, Ellerbe plans to offer pre-made take-out meals and an upscale retail outlet on-site. Even if the dishes that I had aren’t on the menu when you visit, you probably won’t be going home disappointed — or hungry — from Ellerbe Fine Foods.