What you’ll probably notice about writer-director Spike Jonze’s long-anticipated Where the Wild Things Are is that a lot is missing: cheap pop-culture references, self-conscious meta jokes about children’s movies, and roof-raising CGI effects. The monster world that Jonze (Being John Malkovich, Adaptation) and cinematographer Lance Acord conjure isn’t even as colorful as the firelit forest trees in Maurice Sendak’s slender 1963 picture book of the same name. Our troublemaking hero Max (Max Records) cavorts with his huge, shambling, nearly bobble-headed wild things against stark backgrounds of rocky coastlines, windy deserts, and a claustrophobic fort they build together.


The only nod to contemporary filmmaking is some jittery verite camera work, and even that lends the movie a documentary feel that unnerves the viewer: It’s as if Animal Planet producers went on a straight-faced pursuit of the incredible fauna on an obscure island called Sendakia but never acknowledged that the whole trip was imaginary. 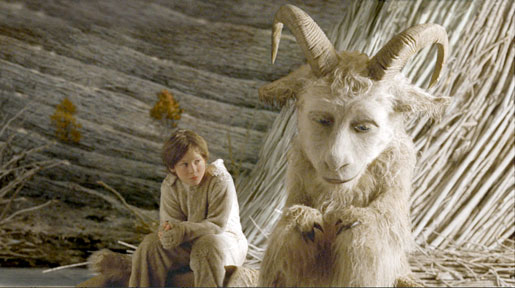 The fantastical hairy brutes that Max, in threadbare wolf costume, stumbles upon after running away from his stressed-out mother (Catherine Keener) seem ho-hum at first. They look like homeless creatures that Jim Henson might have designed, and indeed, Henson’s Creature Shop custom-created these wild things: vaguely huggable but careworn, with bloodshot eyes, wet nostrils, and matted fur. But here the combination of subtle CGI and puppetry effects suggests that much of the budget went into the detailed facial expressions of the creatures’ joy, confusion, doubt, rage, and sadness. All of the digital wizardry that bombards contemporary moviegoers is used sparingly and in service to these bestial characters, who are exquisitely etched with human personalities that Max must learn to negotiate. Herein lies the movie’s beautiful victory: Jonze and his co-scriptwriter, best-selling novelist and noted ironist Dave Eggers, have stripped Where the Wild Things Are to its loaded emotional essence and then gracefully expanded upon it via a series of adventure-story vignettes that illustrate how one child discovers that he is not the center of the universe.

Sendak has acknowledged that his book is largely about a kid dealing with anger issues. The movie opens, like the book, with Max chasing the family dog with a fork. It’s a fast, intense sequence that nicely underscores what drives this boy’s fantasy life. He gets a huge rush from pretending he’s a merciless predator. When surrounded by the forest-dwelling, hippie-like commune of monsters, he is tiny and helpless — until he growls back at them, declares himself a Viking conqueror, and they crown him king. The young Records is better than a prodigy. He’s a natural — there’s not the slightest trace of SAG card-carrying precocity in his vibrant work here.

Leadership has its drawbacks, as Max quickly discovers. His fanged subjects are alternately suspicious, resentful, and desperately loyal toward his new regal status. The tusked Judith (voiced by Catherine O’Hara) curries favor even as she hints that his rule is illegitimate. Her nose-drooping “old man,” Ira (voiced by Forest Whitaker), just wants everybody to get along, while timid, goat-like Alexander (voiced by Paul Dano) mostly just wants to be noticed. K.W. (voiced by Lauren Ambrose) is big-sister sweet but keeps an inquisitive distance, which comes as no surprise, since her sometime partner, Carol (an extraordinarily expressive James Gandolfini), has the hair trigger temper in the bunch. He’s the most eager to believe that Max will be a benevolent leader, which means, as promised, that King Max will keep “the sadness and the loneliness” away. But, like Max, Carol is also given to destructive rages when the world hurts him.

Where the Wild Things Are manages to be tough-minded and gently funny at the same time. Jonze labored for nine years against constant obstacles to complete his stubbornly realistic take on Sendak’s 20th-century fairy tale, and the director’s vision, with smart concessions to the studio, is powerfully realized in a sweet, bleak fantasy full of blunt truths about family relationships. Is it for young kids? I’m inclined to say no, but there was a big contingent of children 10 years old or younger at Monday night’s preview (and I saw only two families walk out). Overall, the tots seemed enthralled with the hybrid Jonze-Sendak beasties, which undergo an impressive transformation from scary to goofy to poignant as the movie proceeds. That’s probably the same trajectory the adults in their lives are taking.