More than a dozen years ago, I was one of two official film critics for another publication. What innocent days those were. They were largely devoid of cell phone cameras, internet digital streaming, black market websites, large-scale DVD burning, and the whole contemporary multi-billion dollar piracy racket that results in big-budget movies opening the same weekend that their cheap, illicit duplicates become available under the counter at your local nail salon.

You know how heady those times were? During holiday season, when the prestige pics opened and critics compiled their year-end top ten lists, we waited for big packages full of copies of those flicks labeled “For Your Consideration.” And they came in VHS format! (Yes, Brianna and Jordan, I’ll explain to you what VHS tapes are in a minute).

Fast forward to 2009, when my beat is no longer film but I occasionally take up the slack for a critic on vacation. When I arrived at last Monday night’s preview screening of “Where the Wild Things Are,” I thought President Obama was on hand to introduce the movie. Security was that tight. Beefy, uniformed guards picked through backpacks and purses. If cell phones were discovered, people were told to take the devices back to their cars or admission would be refused.

Once inside, another set of guards waved wand-like metal detectors over the bodies of would-be moviegoers. I thought I heard a sound up ahead. Was that the snap of a rubber hygiene glove being pulled over the hand of a menacing prison matron hired by the studio?! No, it was just Brianna snapping her gum. Whew! 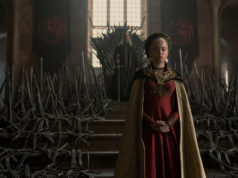 House of the Dragon Recap, Episode 2