I’m not ashamed to say it: A Serious Man confused the hell out of me. Most confusing movies are that way because they’re poorly made, but this one is incredibly well made. (One expects nothing less from the Coen brothers, after all.) This drama streaked with black comedy – or is it a black comedy with dramatic power? – defies explanation.


I’m even having trouble answering the simple question of “What is this movie about?” A Serious Man is dense, allusive, and purposefully obscure. Remarkably, it’s also pretty funny. It’s a prodigious achievement and a work of considerable power. I’m just not sure I like it. 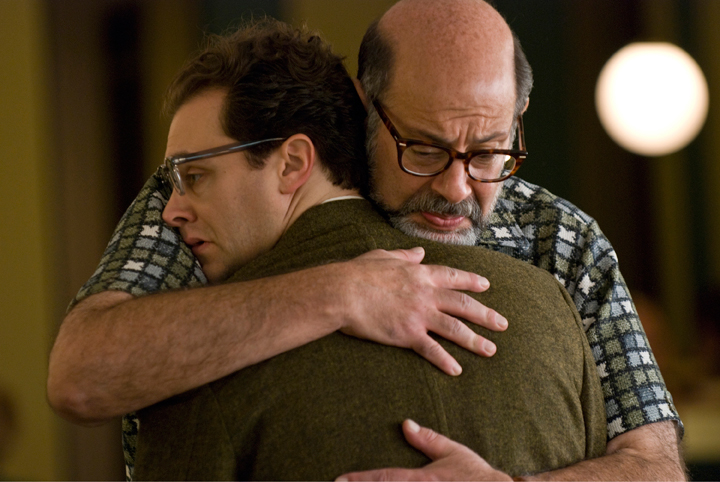 The movie has won much of its attention because it’s based – not too closely, one can only hope – on the Coen brothers’ early life. The story centers on a Jewish family deep in Gentile country in the late 1960s, headed by a professor at a university in Minnesota. Lawrence Gopnik (Michael Stuhlbarg) is looking forward to receiving tenure and attending the upcoming bar mitzvah of his son Danny (Aaron Wolff) when a series of unfortunate events befalls him. First his wife Judith (Sari Lennick) suddenly announces that she’s leaving him for Sy (Fred Melamed), their loathsome friend who insists on giving Larry soulful, consoling bear hugs. Then Larry discovers that his sad, freeloading brother Arthur (Richard Kind) spends all his time filling a notebook with deranged scrawls. Next, a failing Korean student (David Kang) tries to bribe Larry into giving him a passing grade, an act that the kid’s father (Steve Park) backs up with a threat of legal action. Larry’s also variously hounded by an anonymous hate-mailer defaming him to the tenure committee, a hostile and territorial goy neighbor, and a Columbia Record Club sales rep demanding membership payment even though Larry has never joined. Larry’s soon up to his tuchis in legal bills, and he sees three different rabbis for some badly needed spiritual guidance. They all prove massively unhelpful.

Judaism has never been a major issue in any of the Coens’ previous movies, but this one is so Jewish that moviegoers who aren’t serious students of Gnosticism and the Kabbalah will feel like they’ve been plunked down in an alien landscape. The film has plenty to say on the subject of Jewish assimilation: America in the 1960s is paradise on Earth compared with other places for Jews, yet the Jewish characters in this movie make little attempt to engage the world outside their enclave. The film traffics in all manner of references, and there’s a hair-raising Yiddish prologue set in a Polish shtetl in the distant past, with a couple receiving a visit from an elderly neighbor (Fyvush Finkel) who may or may not have died three years before. This is one of several blind alleys that the film intentionally leads us into, yet somehow the digressions feel like part of an overall plan, which is a tribute to the filmmakers’ construction skills.

Despite the inside nature of many of the jokes, you don’t need to be a Talmudic scholar to appreciate running gags like Arthur’s constant cries from the bathroom that he’ll be out “in a minute” or the foulmouthed kid on Danny’s bus who describes everyone as a “fucker.” Contrary to the Coens’ usual practice, they have omitted big-time Hollywood stars from the cast in favor of relative unknowns (Stuhlbarg has done most of his work on Broadway). The actors reward the filmmakers with flavorful performances that fit the mid-century Jewish idiom.

For all this the actors can’t keep the movie from becoming exasperating on occasion, because Larry is a nebbish with so few resources. He’s completely unable to deal with either the Korean dad’s untenable blackmail scheme or being thrown out of his house by Sy and Judith, even though Judith’s the one who’s leaving and Sy has a house of his own. Every new development takes him completely by surprise, and his reaction is always the same one of befuddled outrage at Hashem, which is the name by which these characters call God. It takes every ounce of the Coens’ powers to keep this from becoming monotonous.

The nihilistic religious subtext running through the Coens’ films has now come to the surface. Toward the end of A Serious Man, the Coens set us up to think this will be an uplifting movie about a man who realizes that his troubles aren’t as bad as other people’s, but if you pay close attention to two subtle developments at the very end, you’ll see that actually the opposite happens. It’s about a man who has no idea how bad his life is.

Last year I wondered whether the Coens were turning into Woody Allen, and now that has pretty much happened. Both Allen and the Coens see the world as a brutal place where bad things happen to decent people while the wicked prosper, and the three of them are experts at mining this belief for bleak tragedy and even bleaker absurdist comedy. The difference is that Woody is sure there is no God. The Coens think there is one, but their God is just screwing with us for His own twisted amusement. Their world view is severely constricted (Woody would tell them to enjoy the little things in life), but the skill and craftsmanship that they bring to bear on their films is as awe-inspiring and elemental as the looming natural disaster that brings A Serious Man to its fiercely rhetorical end. You don’t critique this movie so much as stand back in awe.