Conservatives like to complain (not without some basis) about how Hollywood frequently portrays them in a negative light. I hereby point out that just about every character in The Blind Side, including the heroes of the story, is a dyed-in-the-wool Southern Republican. That’s a refreshing change, though unfortunately it’s the only one worth mentioning in this movie that takes an amazing true story and turns it into a rote football drama. 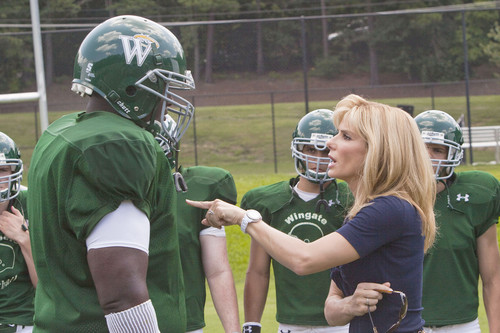 The Blind Side is based on a book by one of America’s best sportswriters, Michael Lewis. Part of it details the rise in importance of the left tackle position in football, and the movie, like the book, begins by showing us the infamous 1985 NFL play when Lawrence Taylor snapped Joe Theismann’s leg during a blind-side hit. Most of the plot, however, is about how a Memphis-based basketball coach/fast-food franchise owner Sean Tuohy and his interior-designer wife, Leigh Anne, took in a homeless African-American teen named Michael Oher (pronounced like “oar”) who turned out to have a turbulent past. The Tuohys not only gave him a home and an education but also helped him become a powerful left tackle for the local high school and then the University of Mississippi. (Oher’s success story is a work in progress. He was drafted by the Baltimore Ravens this year and slotted in at starting left tackle on a shaky offensive line.)

The best thing in the film is Sandra Bullock as Leigh Anne. Even though the actress has been tinted an unnatural shade of bronze for some reason – from the photos I’ve seen, the real-life Leigh Anne Tuohy didn’t go overboard on spray tan – Bullock manages to avoid turning her role into a caricature, no easy feat playing a woman who rings a football coach’s cell phone during a game and harangues him about his play calling. Her restraint is gratifying to see, but newcomer Quinton Aaron isn’t up to scratch as Michael Oher. The player described in the book is a gentle giant who tends to clam up in uncomfortable situations. Aaron gets the man’s fundamental sadness, but he’s lost when he’s required to play something more.

To be fair, writer-director John Lee Hancock doesn’t give him a whole lot to work with beyond some comic interludes with the Tuohys’ young son (Jae Head). Hancock leaves out the most trenchant parts of Lewis’ book, which details how the various state social agencies that were supposed to protect Michael Oher repeatedly failed him instead and how a rare athletic talent would have been overlooked completely if not for the unusual generosity and perseverance of the Tuohy family. (Hancock also omits the shameless ways in which Sean gamed the college athletics system to inflate Oher’s grades.) A more conscientious director would have showed us these things without sacrificing the thrills of a good sports drama. Unfortunately, Hancock, as in his previous movies, is too busy turning this into an assembly-line Hollywood product. Maybe if he weren’t, The Blind Side would earn some of the uplift that he’s obviously looking for.