The radiant and gently heartbreaking An Education opens in Grapevine this Friday and is still playing at the Modern this weekend. It richly deserves to be seen, in a week when the buzz machine is at full roar for that other movie about a schoolgirl and an older guy. Fans of the Twilight saga may want to check out this excellent British drama for comparison purposes. They’ll likely find it to be one of the year’s best movies, as indeed it is.


The main character is Jenny Miller (Carey Mulligan), a smart, accomplished 16-year-old Londoner in 1961 who dares to dream of being accepted into Oxford. That changes one rainy day when she meets a man named David (Peter Sarsgaard), whose epicurean tastes are tailor-made for Jenny. She sees her education as a means of escape from her dowdy middle-class neighborhood of Twickenham, but David offers her a shortcut to everything she wants: to be a worldly intellectual who travels to Paris and frequents jazz clubs, fine restaurants, and classical music concerts. No wonder she’s smitten with him as only a 16-year-old girl can be. Unfortunately, David turns out to be shady in ways that go well beyond being a man in his 30s who chases after teenagers. 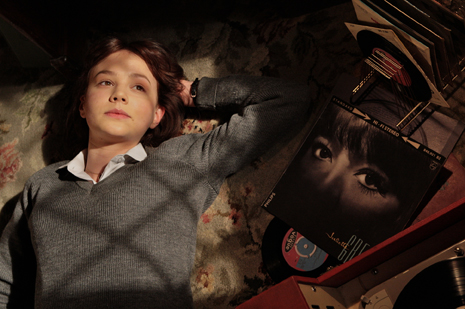 The director is Lone Scherfig, the Danish filmmaker who started out as part of the Dogma 95 movement in her native country. Her 2002 drama Italian for Beginners is a fairly typical example of Dogma 95’s sparse naturalism. What a change she makes here! She does up An Education in an opulent style that recalls 1950s Hollywood dramas, with gorgeous saturated colors by cinematographer John de Borman and a luxurious score by Paul Englishby, who’s not afraid to have the strings play a swelling tremolo when Jenny and David first kiss. The early scene in which David takes Jenny out with his pals for dinner at a fancy nightclub is bathed in a white light that’s as unearthly to us as the posh surroundings must be to Jenny. (Adding to the atmosphere is Beth Rowley, who appears on screen performing two of her lush newly composed period jazz songs.) The entire scene, like the movie as a whole, captures the intoxicating power of hanging out with cool, educated, attractive people, especially for a teen who’s never experienced it before.

The film is adapted from an essay, in turn excerpted from a memoir by British journalist Lynn Barber; the book was published as a whole only recently. Barber recounts how her youthful affair colored her outlook on the world and helped make her into a highly skeptical adult slow to trust other people. The movie doesn’t follow Jenny that far in life, but screenwriter Nick Hornby, who’s better known as a novelist (High Fidelity, About a Boy) and not known at all for drawing sharp portraits of female characters, does excellent work tracing Jenny’s aspirations and insecurities and how they lead her to consider throwing away her Oxford ambitions for an eminently unworthy man.

The script also examines how David wins over Jenny’s parents (Alfred Molina and Cara Seymour) with his sophistication and his carefully dropped hints about his money and connections. He plays everyone expertly, not insisting on sex with Jenny when the opportunity first presents itself and taking her out of town for the weekend by inventing a pretext about visiting Oxford, presenting the trip to her parents as educational. An actor who made his name playing creepy bad guys, Sarsgaard here demonstrates an old-school polish that you wouldn’t suspect. He renders this tempter as someone funny and likable, with a sad awareness of his own moral inadequacy leaking out from underneath his suave exterior.

Many other actors distinguish themselves here as well, from a subdued Olivia Williams as Jenny’s favorite teacher to an uncommonly funny Rosamund Pike as one of David’s airheaded friends. However, the show belongs completely to the 24-year-old Mulligan, who’s done most of her previous work on British TV. The early scenes here sparkle with her lively mind and eagerness to learn things. Maybe the most impressive thing about her performance is the way she moves. Slender and diminutive, Mulligan displays a swan-like grace when she’s walking around Paris, and she’s confident and sexy when she’s dancing at a party with David’s best friend (Dominic Cooper). At other times she seems very much a child, as in the giggly scenes with her fellow students, or her flop of tickled embarrassment in bed when David makes a sexual suggestion. Jenny is at that delicate moment between girlhood and adulthood, and Mulligan catches it perfectly. This makes her all the more piercing in the scenes near the end, when Jenny discovers the extent to which she’s been used.

That’s incomplete, though. Jenny’s a willing accomplice rather than a pawn, and she comes to see that, too. That’s just another example of this film’s richness and complexity. As Jenny picks herself up and soldiers on, emotionally scarred but wiser, the movie fully earns its title An Education with the intelligence and sensitivity that its director, writer, and actors bring to this coming-of-age story. Those qualities make it beautiful.