Here are a couple of fun facts about the 817 musical entity Disco:Hate, a.k.a. Casey Colby: First, he sings and writes original material but doesn’t consider himself a “singer-songwriter.” Second, though he calls himself Disco:Hate, he bears no animosity toward the flashy, dancey sound popularized in the 1970s.


“In my mind, a singer-songwriter is someone who wants sole ownership of the songs and will only perform them the way he wants them to sound,” said the 24-year-old Grapevine native. “It’s never been my intention to be a solo performer with just an acoustic guitar. I like to collaborate.” 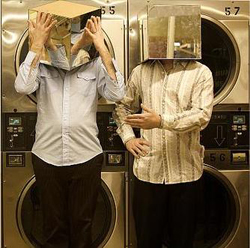 On the disco thing: “I thought it was interesting that the words ‘disco’ and ‘hate’ are linked in people’s minds with the same negative connotation, so I just put them together.”

After a few listens to Disco:Hate’s infectious second CD, Meet Me in the Bathroom, it’s clear that Colby’s musical cynicism is shot through with irony, self-doubt, and a screwball earnestness that makes tunes like “Don’t Touch Me” and “Night Eyes” really stick. Produced by Clint Parker, who goes by the handle Mr. Parker, whom Colby met while the two were members of the prog-choral-marching outfit Mount Righteous, the new songs are raggedy and sparkling, buoyant and impatient, and they combine tinges of the punk and jazz styles that are the twin obsessions of Colby’s young musical life. Threading intricate acoustic guitar work with squirrely trumpet and slightly off-tune piano lines, Meet Me in the Bathroom offers precocious, poppy saloon-punk for people who hate the world but wouldn’t dream of dropping out of it.

Colby’s father bought him a mini-drum set when he was four. By the time Colby turned 10, he was taking guitar lessons. When his time at Colleyville Heritage High School rolled around, he discovered that the school jazz band was a prime spot for guitarists — Colby played alongside Bryce Avary, who would go on to become the mastermind behind the major-label indie-pop act The Rocket Summer. With Mount Righteous co-founders Justin Spike and Joey Kendall, Colby formed an off-campus punk-inflected group, The Jerks of Society. Inspired by the likes of New Waver Adam Ant and Lee Ving of the still-standing L.A. punk outfit Fear, the Jerks featured Colby sharing songwriting duties with Spike and singing lead. At this point, another idol, jazz guitarist Pat Metheny, began to steal Colby’s attention.

“I’ve always tried to disguise the jazz and punk influences [in my material],” Colby said. “I didn’t want to be obvious about playing one or the other. After reading about people like Miles Davis, I discovered there are a lot of similarities in ideology between jazz musicians and punk musicians: The do-it-yourself ethic, refusing to compromise, wanting to be out on the road a lot.”

Colby enrolled at the University of North Texas, whose jazz program is one of the best in the country. But instead of music, he studied political science and Spanish while making sure he took at least one music class each semester. He may have been the first non-music major to perform with the school’s prestigious L5 Guitar Ensemble. “I had less respect for them after they let me join,” he said with a chuckle.

In 2007, after UNT, he joined Mount Righteous as the collaborative’s snare drummer. As one of the 11 original core members, Colby enjoyed performing with so many different musicians and familiar faces. Through the band he met his future producer, Parker, who specializes in piano and trumpet.

But Colby had no idea the group would become so popular so fast. What started out as fun became long hours of work. Professional commitments trumped friendships. He and Parker performed their final show with Mount Righteous last February.

Colby then took a second look at a solo album he had recorded in 2007 before joining Mount Righteous. The recording was a homemade electric affair of guitars, bass, drums, and keyboard. To his ear, the music needed a little something extra, namely a producer/collaborator. When time came to record his next project, Meet Me in the Bathroom, Colby asked Parker to produce it.

“I play everything but the trumpet [on the record], but the sound of the CD is definitely [Parker’s],” Colby said, adding that most of the record is acoustic-based.

Colby’s songwriting inspiration? It wasn’t Adam Ant or Lee Ving but rather “The Jerks of Society — the songs were all new, but I wrote them like they were the album the Jerks never got to record.”

Indeed, Meet Me in the Bathroom glows with teenage insouciance, clever misanthropy, and vulnerability. To promote the disc, Colby and Parker have started booking a small tour for next spring that’ll take the duo from North Texas to New York City. They’ll be sharing bills with Michaelmatician, a New Wave-inspired solo artist with whom they’ve been exchanging phone calls and e-mails. On tour, Colby hopes to translate live the influence of another one of his favorite artists – Larry David, the comic actor and writer who created and stars in HBO’s Curb Your Enthusiasm and co-created the legendary NBC sitcom Seinfeld. Colby passionately shares David’s neurotic worldview. “I get two big ideas from him,” Colby said, chuckling. “Nothing ever gets resolved, and nobody ever learns lessons from the past.”