To the editor: The Fort Worth Weekly gave a Turkey Award to the city council for ostensibly funding – in these trying times – the creation of a John F. Kennedy sculpture destined for General Worth Square. The Turkey judges got their facts wrong: The sculpture funding was entirely private.


The sculpture has already been created and is awaiting installation. The $250,000 approved by the city is to perform long-overdue maintenance work in the park. Lighting and electrical repairs, amenity upgrades, irrigation, brick and pavement repairs, landscaping, and other baseline physical improvements will be funded with gas well revenue dedicated to parks.  Downtown Fort Worth Inc. is a partner with the city on this project and continues to raise private funds for even more park improvements.

The Turkey Award was undeserved, and I believe the city council would not object to your request for its return.

Editor’s note: Fort Worth Weekly regrets the error and rescinds the Turkey.

To the editor: I really enjoyed the awards. They were richly deserved by the uninformed, clueless, stupid, greedy, uncaring, and incompetent. 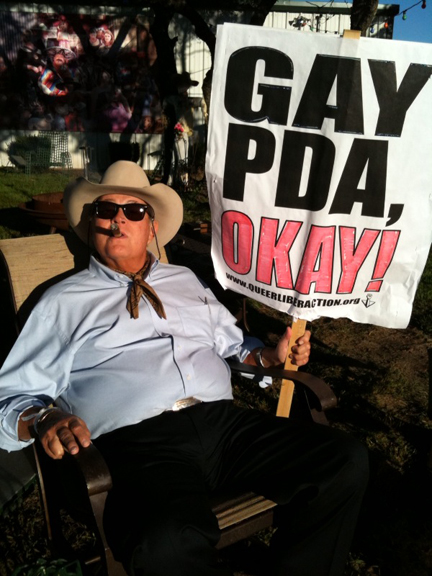 Hub Baker’s assistant sent Fort Worth Weekly this photo after the Stockyards veteran’s sense of humor and country-boy euphemisms didn’t play well during Queer Liberaction’s recent gay kiss-in at the Stockyards. The Cowtown Coliseum manager and rodeo producer was widely reported to have told a KXAS/Channel 5 reporter that if gay kissers didn’t mind their manners, they might “need to get a good whipping.”

That quote earned him ire, including a Turkey Award from the Weekly that dissed Baker by reminding him that “there are worse things to do with your lips than kissing in public, and Baker just proved it.”

But Baker said he never singled out homosexuals. He prefaced his “whipping” remark by saying the Fort Worth Stockyards welcomes everyone but that he has a problem with public makeout sessions, gay or straight.

Also, he said, he used the word “whuppin’,” meaning an old-time spanking from Mom or Pop. “That wasn’t making a threat,” he said.

When asked if he was anti-gay, Baker said, “Hell no.”

Some of the most fun and creative people he has known are gay, he said, and “all I was trying to say is if people come out in public they ought to act like ladies and gentlemen, gay or straight.”

J.D. Granger Does Not Deserve Another Penny of Taxpayer Money