Nelson Mandela reportedly said that if an actor ever were to portray him on screen, he’d want it to be Morgan Freeman. Well, with the release of Invictus this week, he now has his wish. I don’t have mine, though. I was hoping that one of the 20th century’s great leaders would get a movie worthy of him. The sluggish, fatally reverent Invictus isn’t that movie. 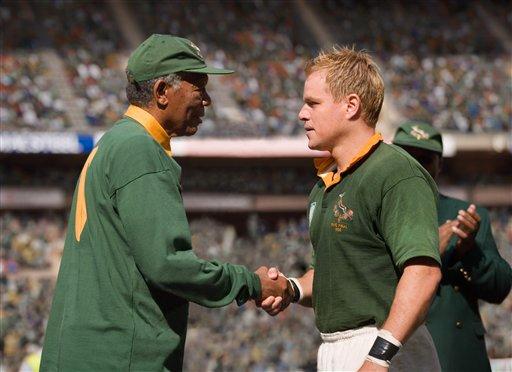 Based on John Carlin’s book Playing the Enemy, the film highlights an unheralded but important chapter in the history of South Africa’s fraught transition from apartheid to democratically elected, black-majority government. Like most other aspects of old South Africa, sports were segregated by race. The country’s white population took great pride in their national rugby team, nicknamed the Springboks. On the other hand, black South Africans (who preferred soccer) viewed rugby as a symbol of oppression and struck back at the white minority by launching a largely successful effort to persuade other nations to refuse to play against the Springboks. Once Mandela took office as president, he turned the stick into a carrot, publicly throwing his support behind the Springboks and urging black South Africans to root for the team they once hated, as the country hosted the 1995 Rugby World Cup. Decided underdogs, the Springboks rode the home-field advantage and the support of their new fans all the way to a world championship.

This terrific sports story is directed by Clint Eastwood, and it plays to precisely none of his strengths as a filmmaker. The script by Anthony Peckham details the intricacies and delicate political calculations that went into Mandela’s decision to back the rugby team. It focuses on this so much that it loses sight of character. Mandela himself never comes across as a human being, despite the script’s laborious attempts to depict his fractured family life. The same goes for François Pienaar (Matt Damon), the Springboks’ captain and inspirational leader. Too much attention is devoted to Mandela’s jittery security guards for the dramatic payoff that it offers. I really wish the film didn’t take its title from that awful William Ernest Henley poem. (“I am the master of my fate / I am the captain of my soul.”)

Invictus fails even the first test as an exciting sports movie. Eastwood does a fair job of filming the rugby action and resists the urge to dumb down the sport for the benefit of non-fans. What he can’t do is wring much dramatic juice from the action. To be fair, he’s hampered somewhat by the historical events he’s depicting: South Africa’s finals victory over New Zealand was a tactical battle in which neither team scored any tries (the rugby equivalent of touchdowns). However, Eastwood misses the excitement even in the team’s down-to-the-wire semifinal victory over France. This director has never shown the ability or the inclination to raise audiences from their seats with jubilation, and his failure to do so here turns the movie into a museum piece.