Traditional hand-drawn animation has been out of fashion for much of this decade. Most of Hollywood followed Pixar’s lead years ago and went to computers for their animated family movies. Now the novelty value of that has worn off, and the current vogue is 3-D. I’ve always held the position that kids, like most grown-up moviegoers, respond to characters and story more than visual style when it comes to animated films.


There’ve certainly been enough dull computer-animated movies to prove that the pixels aren’t everything. Still, hand-drawn animation has been largely neglected, though the Pixar-infused management at Disney hasn’t abandoned it, releasing Hayao Miyazaki’s dazzling Japanese film Ponyo in American theaters this past summer. 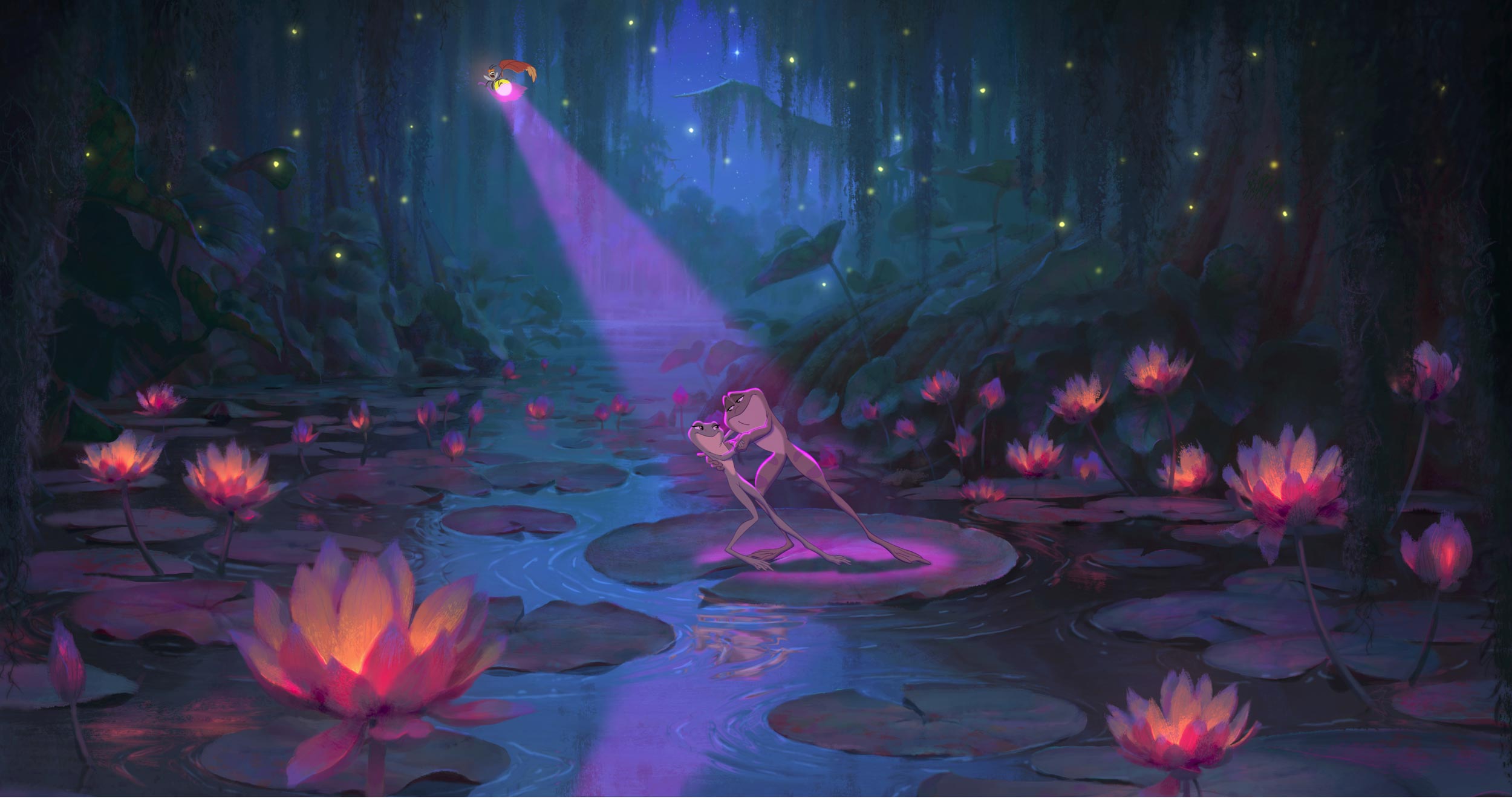 Now Disney has come out with their own effort, The Princess and the Frog, their first hand-drawn movie since 2004’s Home on the Range. Even though much has been made of this being the first Disney cartoon with an African-American heroine – a long-overdue development, by the way – this movie is really no different from the string of cartoon musicals that the studio put out in the 1990s. Therein lies the problem.

The main character is Tiana (voiced by Anika Noni Rose), a young woman in New Orleans in the 1920s, working multiple shifts waiting tables so she can save up enough to realize her late father’s dream of opening the city’s finest restaurant. Meanwhile, Prince Naveen (voiced by Bruno Campos), a spoiled playboy from a fictitious overseas monarchy, visits the Crescent City and looks for a party, only to be changed into a frog by a voodoo-practicing con man (voiced by Keith David) as part of a needlessly complicated plot to land the fortune of the city’s richest businessman (voiced by John Goodman). The newly froggified prince mistakes Tiana for a princess and persuades her to kiss him. Instead of changing him back into a human, it changes her into a frog as well, and they wind up journeying deep into the bayou to find a witch doctor (voiced by Jenifer Lewis) who’ll restore them to their former selves.

The movie is directed by Ron Clements and John Musker, the same team that did The Little Mermaid 20 years ago. Surely that’s no accident, as that film began the line of Disney musicals that The Princess and the Frog now seeks to join. The Little Mermaid re-established Disney as a major presence in the entertainment industry. Along with the musicals that followed, it featured snappy scripts and imaginative musical numbers set to songs written by the team of Alan Menken and Howard Ashman. Disney spent the 1990s churning out another expensive musical almost every year, and as a result everything fresh about those movies was blunted through repetition. (The rot started to set in noticeably as early as 1994’s The Lion King.) The studio never did adequately replace the songwriting brilliance of Ashman after his death in 1991, and when Hollywood started making live-action musicals again in the ’00s, it set the bar higher for the animated ones.

Unfortunately, The Princess and the Frog recalls the lesser likes of Pocahontas and The Hunchback of Notre Dame more than it does The Little Mermaid or Beauty and the Beast. The soundtrack is filled out with an undistinguished bunch of Randy Newman songs that always stick to the same Broadway-style template even when they’re imitating Dixieland jazz or zydeco. Tiana and Prince Naveen aren’t an interesting couple, and the friends they pick up on their journey, a Cajun-accented firefly (voiced by Jim Cummings) and an alligator who wants to play the trumpet (voiced by Michael-Leon Wooley), are stock comic characters who don’t offer any laughs. You’d think the filmmakers would at least make something of the alligator’s predicament. Later on, the movie makes an ill-advised attempt to tug at your heartstrings, and it doesn’t come close to earning that.

The voice work brightens this thing somewhat. Rose has a fine singing voice (she was the member of Dreamgirls who wasn’t Beyoncé or Jennifer Hudson), and Campos, a Brazilian-born actor who’s done most of his work on American TV, makes the frog prince into a funny presence by playing him as a cocksure player, continuing to hit on women even when he’s small, green, and covered in mucus. There are small bits of luxury casting, too – Tiana’s parents are voiced by Terrence Howard and Oprah Winfrey.

None of this disguises the fact that this is yet another story about a girl who gets to be a princess. Why do we give girls the idea that joining the aristocracy is cool? Disney has contributed to the princessification of our culture as much as anyone. (They even felt the need to send it up in Enchanted.) Maybe that’s why, even as it stands as a sign of racial progress, The Princess and the Frog still feels locked in the past.