As avenues go, Carter Avenue, on Fort Worth’s East Side, is pretty modest. But a lot of North Texas gas drilling activists are hoping it will turn out to be the Ground Zero of something big.


The victory they won on Carter Avenue recently, they believe, could mark a change in their fight against irresponsible drilling practices in the Barnett Shale. Other things are starting to turn in their favor as well: attention being paid (finally) by the national press, the state environmental agency, and even the Fort Worth City Council to grave concerns over air and water pollution caused by drilling, as well as a decision to back away from a planned school and community center that would have been built within 600 feet of multiple gas wells. 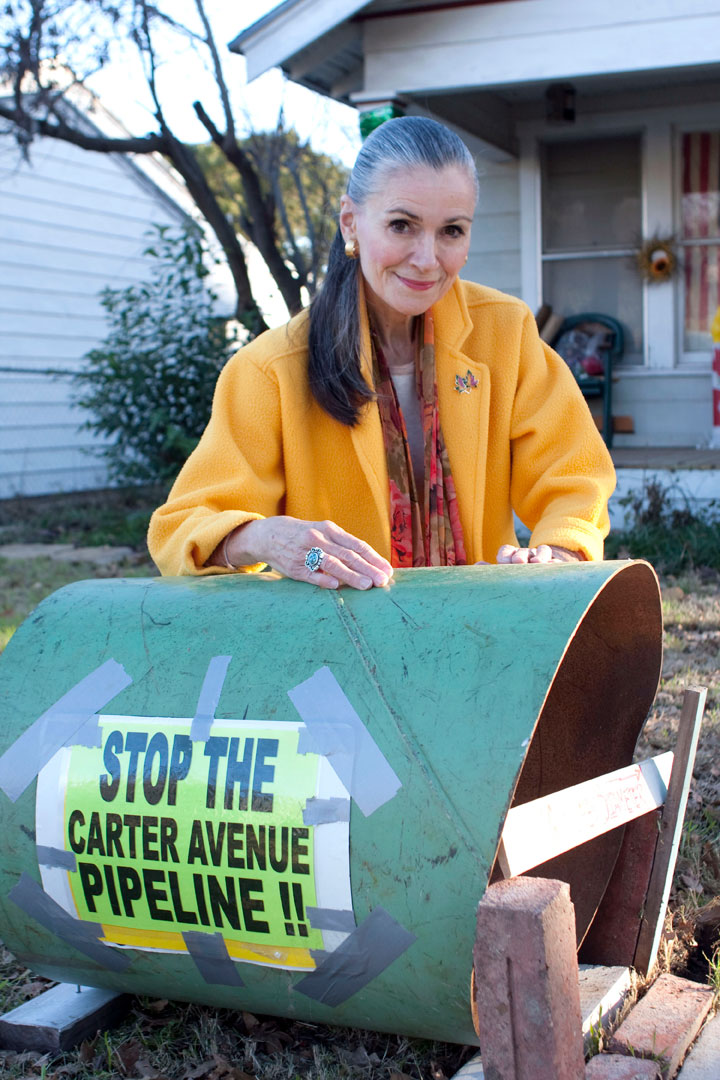 What may be just as important as those developments is the formation of a new group that will combine the forces of rural and urban advocates of safe gas drilling practices.

The North Central Texas Communities Alliance, founded by Esther McElfish, a Fort Worth businesswoman and environmental advocate, and Louis McBee, a longtime East Fort Worth businessman and activist, defines itself as a “coalition of individuals, organizations, and communities throughout the Barnett Shale” who will work for “positive solutions to the problems of natural gas drilling and pipelines” from city hall to Washington, D.C.

“As individuals, we’re fighting this thing neighborhood by neighborhood. But together we can have a much more powerful voice in what’s done in our city and throughout the shale,” McBee said. “People throughout the Barnett Shale are dealing with the same issues, and everyone is being ignored by their elected officials – except in DISH. Our aim is to get those officials listening.”

The group’s “motto and mantra,” McElfish said, was provided by Mayor Calvin Tillman of the gas-industry-besieged town of DISH: “Together we bargain, divided we beg.”

She described the Carter Avenue situation as “a galvanizing point for so many people. It brought together people who objected to eminent domain, people who thought safety was the key issue, and a host of others. People could relate to their front lawns being taken by force and having 16-inch [pipelines full of] unodorized gas running under their yards.”

On Carter Avenue, Chesapeake Energy decided in early December not to lay that gas line beneath the yards of residents, many of whom had lost or were losing their property to the gas company by eminent domain. The community spent 18 months fighting Chesapeake on the issue, claiming that the energy company could run its pipes along nearby I-30. But both Chesapeake and the Texas Department of Transportation had issues with that route, with TxDOT concerned about public safety and the energy giant worried about higher costs.

But in late November, TxDOT removed its objections. After that, Chesapeake all but threw in the towel.

“You have to say it’s nearly dead, but not quite,” said Gary Hogan, president of the Chapel Creek Neighborhood Association on the other side of town and a longtime drilling activist. “Chesapeake has said they’ll run their pipeline along the highway, but if they encounter engineering problems, they could always come back and say they’re going back to Carter Avenue.”

Also in late November, the Fort Worth school district decided against building a new elementary school and community center dual-use building in Rosemont Park. Residents initially challenged the plan because they were upset at the loss of park space to the buildings. That fight expanded with the news that air studies both in DISH and at the farm of award-winning cheese maker Deborah Rogers showed high levels of dangerous pollutants in the areas around gas well facilities. When even the Texas Commission on Environmental Quality finally reported high levels of the carcinogen benzene around some gas facilities, the community also began to rail against the proximity of several planned high-impact wells, which had been granted a variance by the Fort Worth City Council to be closer to a school building than normally allowed.

The death knell for Rosemont came when council member Joel Burns pulled his support from the project. In a letter to school board trustee Juan Rangel, Burns made it clear that it was the voice of the community that made him change his mind. “Although the Rosemont plan was supported by many area parents and nearby residents,” he wrote, “it is now obvious that the opposition to any construction within Rosemont, regardless of its merits, was even [stronger].”

In DISH, which is surrounded by gas wells and compressor stations, Mayor Tillman wrote in November to the five companies, asking them to shut down their compressor stations until residents’ safety could be assured. Tillman had made news a few months earlier when he had the town pay for a 24-hour air-quality test, which showed dangerously high levels of several toxins.

He told Fort Worth Weekly that the temporary shut-down was the only reasonable thing for the companies to do. “As it stands, the companies all say they want to do the right thing” but don’t want to consider corrective action before late summer. “That’s just not good enough. I’m not going to have the people of DISH breathing toxic air for another year. I want them to shut down. And if they did, you would be surprised how quickly they could study and correct things, with a financial interest in doing it effectively and quickly.”

Unfortunately, he said, only one of the five companies, Atmos Energy, has replied – to say they would not be shutting down. “They basically said they …  provide a valuable service to so many people that it would be an imposition on those people to shut down operations.”

The state agency is planning to do further studies in DISH with the cooperation of the gas companies, which Tillman bitterly opposes. “Allowing the operators themselves to dictate the manner in which the tests are taken, as well as what action is necessary to correct the problem … is a mistake the people of this community would be required to live with,” he wrote to TCEQ. “Frankly, this sort of self-regulation is what led to the problems we currently have. To continue this course of action may very well keep the citizens here in harm’s way, and that is unacceptable.”

While Tillman is calling for a gas industry moratorium in and around DISH, others are calling for a more widespread halt to new gas drilling. State Rep. Lon Burnam of Fort Worth has been urging a moratorium on drilling here for 18 months and said he will continue working to convince Fort Worth Mayor Mike Moncrief and the city council to call for one as well. And he think that it could actually happen.

“I see a major change in the number of people who are seeing the inherent problems with urban drilling. Even Mayor Moncrief, who was an ostrich until several weeks ago, is now saying the right things,” Burnam said.

They’re not calling for a moratorium, but councilmembers Kathleen Hicks, Burns, and W.B. Zimmerman are calling for TCEQ to make Fort Worth a high priority for a gas emissions study.

“TCEQ knows you can reduce the emissions at gas facilities by 97 percent or more if you just do adequate environmental safeguards,” Burnam said. But he said TCEQ’s executive director admitted at a recent meeting that the agency will continue to try to persuade the companies to make those changes themselves, rather than requiring the changes.

“It’s time for TCEQ to stop encouraging people to do the right thing and get out the big stick,” he said.

Hogan said that what’s happened on issues like Carter Avenue and Rosemont Park and the increasing demands that TCEQ take action may not look like major changes individually. “But all of these things are raising issues of concern at the same time, and that concern is coming from a lot more people than it did in the past,” he said. “People are getting educated. We’ve got people on the council now wanting to look at the environmental and safety issues related to the drilling, and that hasn’t happened before.”

The communities alliance has already hosted two public meetings and has two more in the works, to be held at Hotel Trinity at Beach Street and I-30. Tillman and State Sen. Wendy Davis are scheduled to speak at the January meeting, and new EPA Region 6 Administrator Dr. Al Armendariz will speak at the February meeting.

“We know gas drilling is not going away,” McElfish said, “but we also know that it can be done in a way that is much more environmentally friendly and safer for all of us. And we’re going to see that that’s how it gets done.”