Some films go from blank page to your local movie screen relatively quickly; Up in the Air wrapped principal photography last spring, which is why it feels so timely. In other cases, exigent circumstances (better known as real life) get in the way and keep a film sitting on the shelf for years before it can be seen. Three such movies are being dumped into our theaters this week, and while you probably won’t care about the delay (nor should you, necessarily), you’re probably aware of the well-earned bad reputation that films released in January generally have. I’m here to tell you which of these movies deserved better. 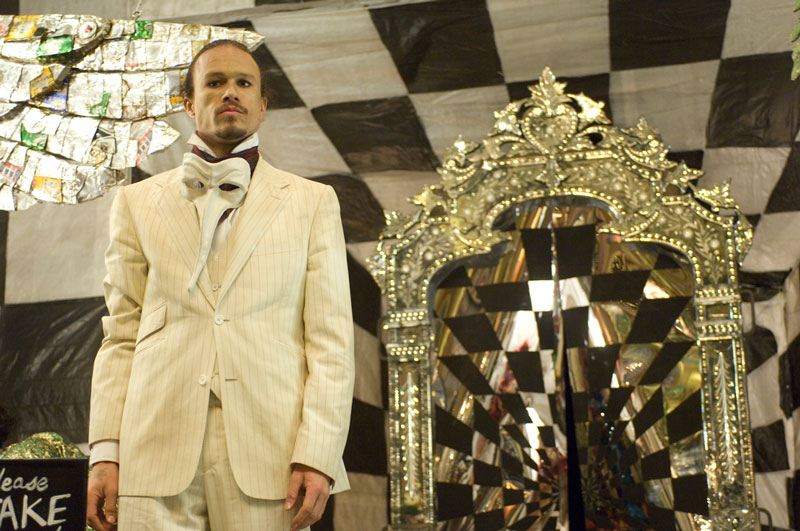 Terry Gilliam truly seems to be cursed. The documentary film Lost in La Mancha chronicled the epic run of bad luck that took down his Don Quixote movie in mid-shoot a few years ago. That seems to have been matched by the director’s experience filming The Imaginarium of Doctor Parnassus. Not only did Gilliam’s lead actor suddenly die young, but his longtime producer, William Vince, also died after a lengthy illness, and Gilliam himself was severely injured after being hit by a car. If I were him, I’d be afraid to leave my London flat. Gilliam, on the other hand, managed to cobble together this movie. I wish I could report that it was worth the wait, but that simply wouldn’t be true.

Heath Ledger portrays Tony, a young man miraculously still alive after being found hanging by his neck under a bridge in London by the retinue of Dr. Parnassus (Christopher Plummer), a centuries-old traveling street entertainer who often makes his spectators part of his show by getting them to walk through the imaginarium, a fake mirror concealing a gateway to a mindscape where their souls are either saved or damned. This is part of a wager Parnassus has going with the Devil (Tom Waits) in which the fate of Parnassus’ daughter Valentina (Lily Cole, a fashion model with some real screen presence) hangs in the balance, and soon Tony is a chess piece in this high-stakes game.

Ledger’s death in late 2007 necessitated extensive reshoots, with Johnny Depp, Jude Law, and Colin Farrell portraying Tony on his three voyages into the imaginarium. However, that’s not why the plot is completely incomprehensible. That’s because Gilliam’s aesthetic has devolved into taking whatever LSD hallucination pops into his head, throwing it onto the screen, and seeing what sticks. This includes a Monty Pythonesque chorus of singing policemen, a group of monks with their mouths sucked into their faces, and a candy landscape that was done better in Cloudy With a Chance of Meatballs. The director’s so engrossed in creating these visuals that he can’t make sense of Tony’s vacillation between good and evil or the love triangle between Tony, aValentina, and Parnassus’ apprentice Anton (Andrew Garfield, an American actor with a strange flair for playing working-class Brits). That’s how a movie that should be a tossed-off whimsical trifle instead turns into a four-ounce cupcake smothered in 32 ounces of day-old frosting.

Youth in Revolt takes its lifeless faux-rebellious title from a series of novels by C.D. Payne subtitled The Adventures of Nick Twisp. The film was shot in spring 2008, and had it come out earlier, it might well have short-circuited the oversimplified “Michael Cera can only play one character” meme that’s now going around.

Cera plays Nick, a teenager trying desperately to get out of his trashy Oakland neighborhood when his mom’s sleazy boyfriend (Zach Galifianakis) hides out from debt collectors by taking the whole family to a trailer park removed from the city. That’s where Nick meets and falls for Sheeni (awesomely named, delectable newcomer Portia Doubleday), a girl with retro Francophile tastes who’s just as anxious to leave her surroundings for a more refined intellectual life. From her taste in boys, Nick decides that he’s too much of a beta male to win her, and so a doppelganger named Francois Dillinger (played by Cera in a mustache and a douchey wardrobe) appears to him and encourages Nick to act out at home, break the law, and do everything to get into Sheeni’s pants.

Having the two Ceras on screen sounds like a terrible idea in the retelling, yet the device works reasonably well, with Cera doing a passable imitation of a skidmark as Francois. He’s got a terrific supporting cast behind him, too, with Fred Willard as the Twisps’ socially conscious neighbor and Justin Long as Sheeni’s drug-dealer brother. Best of all is Adhir Kalyan as one of Sheeni’s schoolmates who becomes Nick’s ally. The baby-faced Kalyan, a South African actor of Indian descent, has lately been a reliable comic sparkplug in Hollywood movies as a gay cheerleader in Fired Up and a chair-overturning fired employee in Up in the Air. Here he works both a British and an Indian accent, and he winds up stealing all of his scenes.

Screenwriter Gustin Nash (Charlie Bartlett) keeps a good grasp of Nick’s smitten-boy motivations amid all the hijinks, and underappreciated director Miguel Arteta (The Good Girl) deftly handles the story’s episodic structure. The comic energy doesn’t flag as the plot proceeds through set pieces such as Nick’s run-ins with Sheeni’s Christian fundamentalist parents (M. Emmet Walsh and Mary Kay Place), an interlude at Sheeni’s French-speaking boarding school, and Nick trying to stage his own death in front of several cops. The movie’s ending is off, but what comes before it is an agreeable comedy for the New Year.

Daybreakers was shot all the way back in 2007 in advance of the writers’ strike, but its release this week feels oddly fortuitous. For one thing, the movie deals with scarcity of resources, which fits our national mood. For another, this vampire flick is blessedly free of any romantic notions, and for those of us who’ve had our fill of the Twilight movies treating vampires as “imaginary gay boyfriends for goth chicks” (in the words of blogger Eliza Skinner), this Australian flick is a nice antidote.

The film takes place in 2019, 10 years after a virus outbreak turned most of the world’s population into vampires. Now the species has become too successful for its own good; the few surviving humans are being kept alive artificially to be farmed for blood, and they’re dying off because demand is outstripping the blood supply. With vampire civilization on the point of collapse, hematologist Edward Dalton (Ethan Hawke) is tasked with finding a blood substitute that’ll keep the vampires from death by starvation or worse. Much of the plot revolves around Dalton’s dealings with his sinister CEO boss (Sam Neill), his contact with a colony of fugitive humans, and whether his human-hunting soldier brother (Michael Dorman) will turn him in.

Forget the plot; this movie’s juice comes from the atmosphere created by filmmakers Michael and Peter Spierig, German twin brothers working Down Under. The Spierigs previously attempted a zombie movie with comic touches called Undead that fell horribly flat, but here their vision comes through much clearer. The film is no Zombieland in terms of comedy, but any horror flick that manages to be intentionally funny deserves to be celebrated, and Daybreakers squeezes some clever gags into the background with advertisements for products used by vampires (blood-infused coffee, fang whiteners, cars with blacked-out windows and cameras that let vampires drive during the day). The movie scores these laughs without turning into camp, because the comedy is balanced by hairier touches like the “subsiders,” vampires who’ve turned themselves into murderous inbred freaks by feeding on vampire blood. The movie doesn’t just satirize our consumer society, it gives a sense of how our world would be different if one thing changed.

The movie would be totally awesome if its action sequences were any more than serviceable or if its emotional threads weren’t so flimsy. Still, it seems ungrateful to complain about a cheap piece of entertainment that serves up so much. I just completed a credible list of good horror films for 2009; if 2010 brings us many more scarefests as inventive as Daybreakers, I’ll be able to compile an even better list 12 months from now.

The Imaginarium of Doctor Parnassus