I’m the world’s worst Japanese person. If I didn’t play in a band with a Japanophile, I would never have eaten sushi, the food that my mother would labor all night long to prepare for special occasions and that I wouldn’t eat. At an eatery that offered Japanese, Chinese, and Thai specialties, I once scandalized my relatives by ordering Thai. 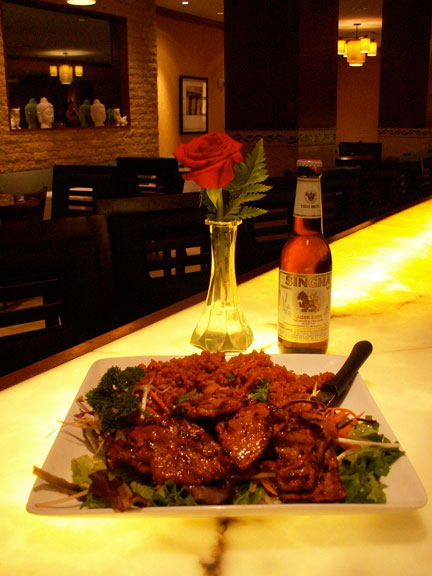 I couldn’t help it. Besides those delightful cats and that musical with Yul Brynner, the kingdom of Siam has produced one of my favorite cuisines, its flavors falling somewhere between the big, bold tastes of Chinese cooking and the more subtle, delicate pleasures of Japanese. So when an ex-chef and serious foodie of my acquaintance pulled my coat to Thai Tina’s, I was attentive. The fare there didn’t disappoint, either, but the location — in a somewhat distressed building at the intersection of Henderson Street and White Settlement Road — was clearly holding the joint back from being all it could be. A move to the Embassy Suites downtown assured Thai Tina’s a steady stream of foot traffic and, for diners, a much finer setting.

An admission: Since the departure of the street musicians and the advent of all that valet parking nonsense, downtown — which a decade or more ago was my favorite place to people-watch — hasn’t been high on my list of destinations. But Thai Tina’s new digs, behind the hotel’s check-in desk, just off the lobby, are nicely appointed, with a pretty green-tiled bar, throw pillows on long couches, and additional seating hidden behind a curtain to preserve intimacy when the place is crowded.

Seems that all of the world’s cuisines, except ‘Meercun, use some heat-producing spice, which provides the added benefit of cleansing the body. Thai just happens to use more of them than any other. Peppers, curries, ginger, and garlic all make their presences felt (and tasted). This was particularly welcome on the frosty winter afternoon when my sweetie and I visited.

What makes Thai Tina’s food a cut above the rest is the way in which Tina’s recipes balance their various constituent elements so that no one ingredient dominates — a neat trick to pull off. Even something as prosaic as a crab rangoon (which I’d always thought was named, like an egg cream, without regard to any of its actual ingredients) can be a pleasant surprise when it proves to be more than just a deep-fried receptacle for cream cheese. There’s crab in Thai Tina’s version, all right, as well as succulent little morsels of scallion and bell pepper.

The entrées were generous in the amount of “the main attraction” included — no digging through mounds of veggies or rice looking for the meat or seafood component. (The menu also offers a respectable variety of vegetarian options.) The hot basil seafood was a lovely platter: Shrimp, scallops, calamari, and mussels swam in a white-wine chili sauce along with asparagus, onions, and bell peppers that retained their crunch, the heat from the pepper oil balanced by the fragrance and freshness of the basil and cilantro. My sweetie’s Panang roast duck was equally aromatic and flavorful, with substantial slices of duck and a sauce that was earthy, a little sweet, and not too hot.

While we still probably won’t be spending a great deal of time downtown, if we ever find ourselves in the vicinity of Bass Hall with a good-sized hunger, Thai Tina’s will surely be high on our list of options.