As far back as 2001, when Peter Jackson first took on the Lord of the Rings saga, I kept wishing that he’d find time to go back to the more life-sized films like Heavenly Creatures that first marked out this New Zealander and his extravagant, operatic imagination. Now, with his adaptation of The Lovely Bones, he’s done just that. And I wish he hadn’t. Damn, that sucks. 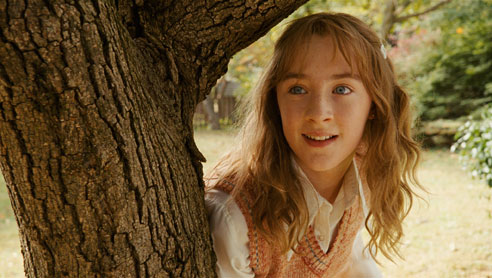 Based on the best-selling novel by Alice Sebold, the film takes place in 1973 in New Jersey. Susie Salmon (Saoirse Ronan) is fully engaged with the business of being a 14-year-old girl, doing her schoolwork and trying to work up the courage to talk to the cute British exchange student (Reece Ritchie) in her class – until the day she’s killed by friendly neighborhood child molester Mr. Harvey (Stanley Tucci), but from the afterlife Susie continues to watch over her family and friends as her parents’ marriage flies apart and her younger sister Lindsay (Rose McIver) grows older than her and, like her father, (Mark Wahlberg) becomes fixated on finding the bad guy.

The movie starts off well enough. The first half-hour or so captures the Salmons’ life in all its blithe ordinariness and culminates in the murder scene, which has been scrupulously edited so that this movie can receive a PG-13 rating. While I’m in the camp that believes that a movie needs to be more unpleasant when it revolves around a child being raped and murdered, what there is on the screen is still enough to make you queasy. The scene takes place in a candlelit underground chamber that’s lined with shelves bearing comic books, angel figurines, and other knickknacks. This is a great piece of set design (by production designer Naomi Shohan) – it’s the sort of place that a kid might plausibly find to be really cool, but it’s creepy too, because we know that the place has been specially built as a trap.

Helping things immensely is Ronan, the ridiculously talented 15-year-old Irish actress who scored an Oscar nomination a couple of years ago for her role in Atonement. If you remember that performance, you’ll be floored by how easily she shifts from having played an upper-class English girl in that movie to playing a middle-class American girl here. Her command of accents isn’t the only thing she brings to this film, either. Her coltish energy spills out of the frame early in the film when Susie’s alive, and later she glows hot with desperation and rage as she comes to terms with her death and the resulting inability to influence the events that she’s watching. Learn how to pronounce her first name (SEER-sha), because this kid’s a powerhouse.

The pity of it is, this movie seriously loses focus once Susie reaches the afterlife. Jackson’s vision of the next world is a parade of garishly eye-catching images: blackened roses reverting to full bloom, collapsing gazebos, tree leaves taking flight like birds, giant ships in bottles running aground on a rocky shore. These images represent good work by the special-effects people, and it’s nice to look at, but it’s as arbitrary and undisciplined as Terry Gilliam’s overstuffed visuals in The Imaginarium of Doctor Parnassus. The story loses all momentum, and the images don’t provide a momentum of their own to make sense of Susie’s journey toward heaven or of the limbo state that she’s currently occupying.

The latter half of the movie is mostly a big snooze, occasionally jolted to life in the scenes taking place among the living, such as a sequence when Lindsay sneaks into Harvey’s house looking for evidence. Susan Sarandon infuses some badly needed camp humor to the proceedings as the Salmons’ hard-drinking grandmother. These are good, but they’re not enough to make this movie into a persuasive experience. The Scottish filmmaker Lynne Ramsay (Morvern Callar) was chosen at one point to direct this adaptation, and I can’t help wondering what her sparse, enigmatic approach to filmmaking might have brought out of this story. All I know is, Jackson’s good taste muffles any emotional impact that this film might have had.

Then again, maybe that’s just Jackson being faithful to his source material. The novel imagines a wrenching tragedy and then offers up little in the face of it except flowery declarations that everything’s going to be OK, a message that was eagerly welcomed by readers when the book was originally published in the traumatic aftermath of 9/11. That’s probably why the novel has aged so poorly and why the film is such weak sauce. You could argue that Jackson’s prettifying treatment is exactly what The Lovely Bones deserves. Hang on, I think I just did.