Talented though he is, Colin Firth has never shown that much range. While his close contemporary Hugh Grant has made a career out of playing different variations on the same randy bon vivant, Firth has made his largely by playing pinched, grouchy, disappointed Englishmen in movies as different as When Did You Last See Your Father? and Mamma Mia! (The two actors are such apt natural foils, it’s no wonder they were cast opposite each other in the Bridget Jones movies.)


Firth doesn’t do anything radically different in A Single Man, but this deliberate, plush period drama is so uniquely suited to his particular talents that it made me feel like I was seeing him for the first time. 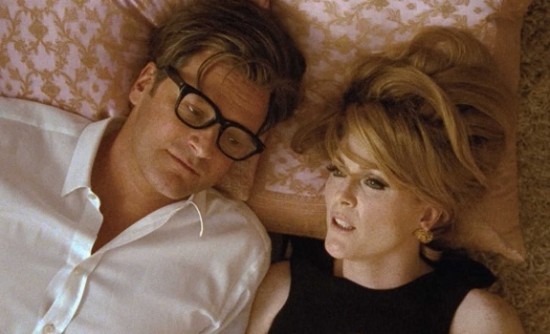 Firth portrays George Falconer, a Londoner teaching English literature at a college in Southern California in 1962. The film follows George as he meticulously goes about his life’s routines on one day, with a few small differences. You see, George can’t find a reason to go on living eight months after the sudden death of his longtime gay partner Jim (Matthew Goode) in a car accident, and so he is setting his affairs in order as preparation for killing himself at day’s end.

The impending suicide is the reason for the movie’s slow pace, which will put you to sleep if you watch it in the wrong frame of mind. Getting ready to take his leave of the world, George spends this day savoring the beauty of his surroundings: the California sunshine, the smell of the ocean, the nicotine from his cigarettes. Going into his office, he notices for the first time what an attractive young woman the department’s secretary (Keri Lynn Pratt) is, and he tells her so, to the bewilderment of their co-workers.

Tom Ford, making his cinematic debut as director/co-writer, takes his time (and occasionally too much of it) because he’s busy lingering over the visual pleasures of George’s world much the same way his hero is. Adapted from a novel by Christopher Isherwood, the film replaces the author’s cool, detached, objective tone with a different form of cool, wallowing in the sets’ luxurious Modernist décor as much as any episode of Mad Men. The occasional narrative drift is a misstep that we might expect from a first-time filmmaker. (Ford is a renowned fashion designer.) He goes to too much trouble making things look good, and the costumes, designed by Ford himself, are so lovingly photographed that at times the movie resembles a commercial for the filmmaker’s own line of menswear.

More promising is Ford’s instinct for handling his actors, which is an important quality for any director. Julianne Moore makes an outsize impression as George’s best friend, ex-girlfriend, fellow Britisher, and hot drunken mess who’s never gotten over him. Still, the director does his part to make sure the show belongs firmly to the leading man. A flashback sequence early in the film shows George sitting at home receiving what he expects to be a sexy phone call from Jim, only to be blindsided by the news of Jim’s death the day before, delivered coldly by an insensitive relation (voiced by an uncredited Jon Hamm). Ford puts the spotlight on his lead actor by filming this scene in a long, unbroken single take as George holds himself together long enough to inquire about the details – and have his request to attend Jim’s funeral rejected – before he hangs up.

Firth rises to the challenge, too, as George’s British reserve crumbles before our eyes. The characters that Firth plays all seem to bear the world’s tribulations and absurdities with a heavy sigh and a tossed-off sardonic joke. Here his resignation takes on a certain beauty, his sad, professorial demeanor (with his artfully tousled hair and wonkish plastic-rimmed glasses) a bulwark against a world that won’t let him declare himself openly. Which isn’t to say that he’s impervious – in a terrific scene, a classroom discussion about Aldous Huxley prods George into an uncharacteristic, heavily coded rant about minorities, intolerance, and the politics of fear. (The camera settles on one obviously gay student in the front row; he says nothing in response, and we never see him again, but from his face we can tell that this lecture has changed his life.) What suspense there is in the film comes from the question of whether George will go through with his plan, and as George looks back on all the joys and sorrows that his life has brought him, the measure of serenity that he finds becomes something deeply moving. In A Single Man, Colin Firth gives what looks to be the defining performance of his career.