In the late 1990s, a Harvard Business School graduate named John Crowley made medical history. He was a Bristol Myers executive whose two youngest children suffered from Pompe disease, a form of muscular dystrophy that had always proved fatal within the first 10 years of life. 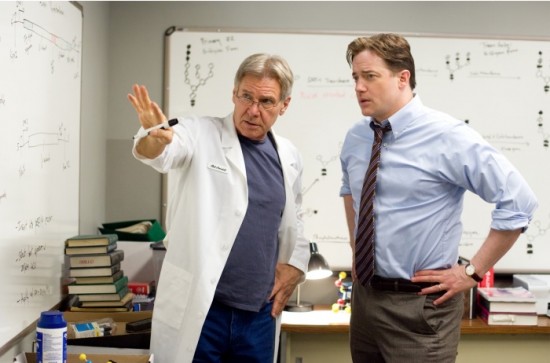 Advised to spend time with his children while they were still alive, Crowley instead left his job to start up a foundation to find a cure for the disease before his kids died. Against heavy odds, he won his race with the clock, as the researchers working with him found a form of gene therapy to halt the disease’s debilitating effects. Crowley’s children were among the first to receive the treatment that prolonged their lives. Geeta Anand told his story in her book The Cure: How a Father Raised $100 Million – and Bucked the Medical Establishment – in a Quest to Save His Children. The movie version bears the much more succinct title Extraordinary Measures, though it’s all too ordinary just the same.

Brendan Fraser plays Crowley and Harrison Ford plays Dr. Robert Stonehill, a character who’s a composite of several real-life researchers. (Warning sign, right there.) An academic scientist at the University of Nebraska who has never actually brought a drug to trial, Stonehill is a loose cannon who can’t get funding for his ideas because he has zero people skills, blasting rock music in his lab while other scientists are trying to concentrate or storming out of a meeting with prominent venture capitalists after they question his methodology. Crowley puts his investors’ money behind Stonehill because the professor’s Pompe research is ahead of everybody else’s but ends up having to devote much of his energy to smoothing things over after Stonehill pisses people off.

The one smart thing the film does is tell this as a business story. Most Hollywood movies like these don’t have the patience to keep the focus on the numbers. Director Tom Vaughan (What Happens in Vegas…) mostly resists the urge to go all weepy and instead sticks to Robert Nelson Jacobs’ script as it explores the difficulties of starting up a biotech company: hiring personnel, proving the science’s viability to the money people, deciding when to sell off the company’s long-term profits in exchange for a much-needed short-term cash infusion. As CEO, Crowley has to make these hefty decisions without a great deal of personal wealth despite his executive salary. These considerations dry the movie out and help raise it slightly above the level of other disease-of-the-week movies.

Nothing else works here, though. An actor with a long history of portraying work-obsessed jerks, Ford is too intense here for the surrounding film, giving a performance that would have better fit an operatic drama like The Mosquito Coast. Fraser’s character is supposed to be somewhat overwhelmed, but the actor too often looks lost trying to cope with the force of his co-star’s scene-chewing. Though Extraordinary Measures treats the story with more complexity than most boilerplate Hollywood sickroom dramas, it still radically simplifies the actual events. If you want an inspiring business story, you’re better off reading the book.