You knew this would happen – that all year long, every time Chow, Baby spotted a new cupcakerie or pear-and-brisket dish, it would crow “I called that! In my New Year’s predictions column, I said that would happen! [singing a la Bart Simpson] I am so smart / I am so smart.” It helps that the spacious yet homey log-cabin-inspired bar at Tillman’s Roadhouse (2933 Crockett St.) is conducive to loud, off-key singing – the only kind  Chow, Baby does, and that’s even before a couple of blood-orange margaritas 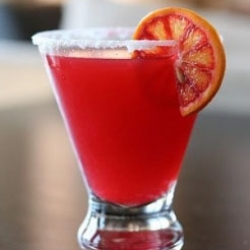 Chow, Baby also called “truffles are the new garlic” – not this year, that was back in 2004, but Chow, Baby could spend the next six years munching Tillman’s truffle-oil-drizzled popcorn ($ free!), served in a steel camp ladle. And that right there sums up Tillman’s: the clever mix of upscale and down-home. Huge chandeliers and rustic wood paneling. Buffalo short ribs and tableside s’mores. Loftily soaring ceilings and Meemaw’s turquoise sofa. To Chow, Baby, the effect was wicked cool, yes, but with more than a touch of “Look how cool we are!” This is not a promising sentiment from a restaurant. It’s a blessedly rare variant on the old “love versus money” motivation for owning/running a restaurant (you want to eat at the for-love restaurants, as they make better food). Here, Tillman’s carefully designed menu and ultra-artful decor seem to be inspired not by love, and not even directly for profit, but to rack up cool points. And as everybody knows, the one thing that ruins cool is trying too hard. Eagerness is uncool.

The service at Tillman’s is sometimes eager – too eager – and often uncool. Of all the staff Chow, Baby encountered, only the busboy made it feel welcome and unrushed. Tip for the hostess: Please don’t push me to the worst two-top in the back of the near-empty restaurant. It’s insulting. Tip for servers: If I am holding my menu right in front of my indecisive-looking face, then no, I am not ready to order no matter how many times you ask me within a three-minute period. Sheesh. Tip for kitchen expediters: Stop sending courses out like it’s a relay race. I really don’t mind spending more than 20 minutes on a good meal.

Chow, Baby’s meal was indeed good, though not great. After a few flavorful but not quite prime-juicy-tender bites of its perfectly medium-rare “PGA“ ribeye ($29), Chow, Baby was doubtful of the server’s claim that the P in PGA stood for Prime. Turns out PGA really means Premium Gold Angus, yet another disingenuous marketing term courtesy of Chow, Baby’s nemesis, the American Angus Association, so Chow, Baby now feels a little rooked. The flavor came mostly from a killer salty rub – even Chow, Baby, who merrily eats salt straight out of the bag (Hawaiian sea salt at Pendery’s, $8.97 for 8 oz.), thought it a bit much. But the accompanying asparagus spears were perfectly grilled and salted just right; the “tater tots” were plush deep-fried truffled goat cheese nuggets with no flavor hint of their humble spud base; and the leftover steak did well on the cold-the-next-morning test. Very nice. Chow, Baby was too full for dessert, but if it ever visits Tillman’s again will definitely try the carousel of frost-them-yourself gourmet cupcakes ($18). Cupcakes! I called that one!