My buddy, a farm kid, loves catfish, but his teenage son and I were leery as we headed to Circle S Catfish Grill in north Fort Worth — neither of us is a huge catfish fan. Fortunately, the menu at the family-owned restaurant offers a nice variety of options. 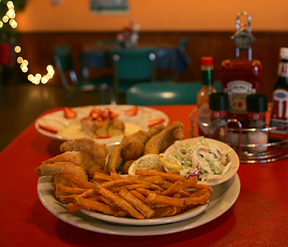 We started with the Chips & Both appetizer: chips with queso and a fiery salsa. The chips were a little soggy, but the queso was tasty enough. (Midway through the meal, though, as the queso cooled, someone noticed that it had turned into concrete.) The salsa was excellent. It had the consistency of a marinara sauce and the kick of a spicy pepper. What a surprise, finding really good salsa at a catfish restaurant.

The menu is packed with more variety than what you’d find at most chain restaurants. The Texas Twister chicken plate was a double-breast portion of blackened grilled chicken smothered in a mild queso blanco and topped with avocado, tomatoes, and delicate, crunchy, yummy onion strings. The blanket of white cheese was superfluous, but the chicken itself had a mild kick to it courtesy of a mystery spice rub. Adding a little of that salsa on top nicely amped up the zest quotient. The plate comes with one side dish: The menu recommends the pinto beans, but I picked the sweet potato fries and wasn’t disappointed. They were sweet, salty, and savory.

The chicken-fried steak was another hit. The crunchy, flawlessly peppery crust surrounded a perfectly flavored, slightly chewy cut of meat. The cream gravy bathing the top was enough for the steak, but order extra if you want dipping sauce for the accompanying Texas toast.

And then there was the catfish. Perfectly plump white fillets came coated in a slightly salty cornmeal batter that was exceptionally crispy and not at all greasy. In fact, I hardly knew it was catfish because it didn’t have that muddy taste that the fish usually packs. The plate comes with your choice of two sides. The homestyle fries were good, but the coleslaw was exceptional. “Like my mom made” was how my friend described it: not too sweet, not too vinegary, and with just the right amount of crunch. Both the cocktail and tartar sauces, which came in large squeeze bottles, were tasty. The tartar sauce was so excellent, in fact, that I used the rather workaday accompanying hushpuppies as an excuse to shovel in more of that tangy, pickle-laden goodness.

The dinner plates at Circle S are generously sized: just enough food, really. Which means that we had just enough room for dessert. The signboard outside proudly advertises a fried Twinkie, which appealed to the teenager. An honest-to-goodness Twinkie had been dipped in a light, tempura-like batter, then fried, and then had all of its excess oil wicked off. The result: perfection sitting in a small puddle of raspberry sauce. He pronounced the delightfully odd treat “better than the one at the State Fair.” Spoken like a true veteran of that annual deep-fry fantasia.

I picked the chocolate cobbler, which conveniently comes in both full and dainty sizes. The smaller size featured a scoop of ice cream atop some of the best, gooey, thicker-than-pudding melted chocolate I’ve ever tasted. The whole thing was topped with whipped cream and a latticework pattern of chocolate syrup.

But the big winner of the evening was the bread pudding. Not day-old bread here: The moist, vanilla cake-like block of warm, sticky goodness came floating on a sea of crème anglaise and topped with strawberries and drizzles of caramel.

The restaurant décor is a crazy quilt of patriotic tchotchkes, athletic memorabilia, and state license plates. The walls are painted pale orange and inexplicably turn to blue and then green down the halls to the restrooms. But don’t let the hodgepodge scare you off. The service is attentive at Circle S, and you won’t leave hungry.