When I was a boy, I visited relatives in South America and noticed that all my uncles and aunts seemed to employ maids. I thought it was strange. My relatives weren’t noticeably wealthier than my parents, and yet neither my parents nor anybody they knew here in the States had a maid. If I’d been older, I might have wondered about those women’s innermost thoughts and what their hopes or dreams were. Belatedly, the observant and astringently funny Chilean film The Maid has given me something of an idea. 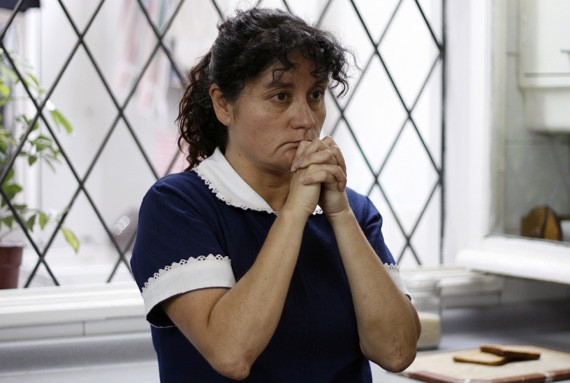 The title character is Raquel (an unforgettably frayed, fidgety Catalina Saavedra), a 41-year-old woman who has spent her entire adult life as a live-in housemaid for the same upper-class family in Santiago, cooking, cleaning, and acting as an additional parent for their four children. Bedeviled by migraines and dizziness, she’s close to both mental and physical breakdown. Yet when the lady of the house, Pilar (Claudia Celedón), decides to take on a second maid, Raquel gets territorial, spitefully driving out successive new hires through spiteful, passive-aggressive humiliations. One mannish older maid (Anita Reeves) responds by trying to beat the crap out of Raquel. Pilar’s overbearing mother (Delfina Guzmán) sighs, “Maid fights! I’ve seen a million of them.”

First-time filmmaker Sebastián Silva plays this all for gleeful dark comedy, but that’s not all he does. He cranks up the tension with long, unbroken takes that follow Raquel around the house as she goes through her daily routine. (The house where the movie takes place is in fact Silva’s childhood home.) He establishes her complicated status as both an outsider and a fixture who’s privy to everyone’s secrets. The movie’s first shot shows Raquel grimly eating dinner in the kitchen while a boisterous family conversation drifts in from the dining room. The maid barely seems to have any identity outside work. All she can think to do on her day off is buy a discounted sweater that’s similar to one of Pilar’s.

That might sound like the setup for a glib tale of economic exploitation, but Silva is too subtle for that. Instead, he shows how the family is as psychologically dependent on Raquel as she is on them. Given more than adequate grounds to fire her, Pilar finds that she simply can’t. One of the movie’s unexpectedly stinging moments comes after Raquel finally collapses from exhaustion. Amid the ensuing panic among the family members, the camera finds their bratty teenage daughter (Andrea García-Huidobro), whom Raquel not-so-secretly despises, crying at the sight of the maid being taken to a hospital.

Just as unexpected is the subsequent arrival of Lucy (Mariana Loyola), a younger maid who counters Raquel’s psychological warfare with a relentlessly cheerful attitude. Lucy actually drives the plot in the final third of the film, somehow piercing Raquel’s thick armor to become her friend and put her in touch with some long-buried sense of self. The Maid ends quietly on a nighttime street, with Raquel tasting her first small bit of freedom. It’s one of the most exhilarating conclusions to any movie from the past year.