Most of the time he was growing up in Fort Worth, painter Drew Snyder wanted to be a musician. It was his first artistic identity. Some of his friends and fellow students at Country Day School — including Ben Groff and brothers John and Steven Hook — displayed precocious abilities in the visual arts, but Snyder was more interested in developing his skills on the guitar.

Besides, the 24-year-old said, his visual artwork had always been “sort of terrible — I took some general art classes, but I never found the right guidance.” 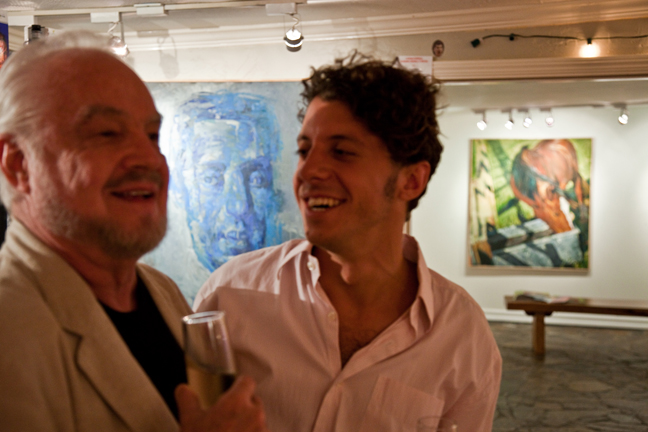 That changed when Snyder was 15 and began hanging out at the 7th Street studio of painter Ron Tomlinson, a Texas Wesleyan University professor who studied with Phillip Pearlstein at Brooklyn College, in the 1960s. Groff and the Hook brothers spent many hours at the 7th Street space taking lessons from Tomlinson, a former critic’s choice for best artist in Fort Worth Weekly‘s annual Best Of awards whose hypnotic portraits and still lifes in oil employ abstract elements to create a disorienting effect. Snyder, following his friends’ lead, first took up the brush seriously in that studio-cum-salon in the space below the Weekly‘s old offices, where games of Scrabble, impromptu guitar performances, and political discussions were common. Snyder credits Tomlinson with nothing less than teaching him to see the world with fresh, unburdened eyes.

Now Snyder wants to return the favor by giving Tomlinson, 65, as well as Groff (who now resides in New Orleans) and the Hook brothers (who live in Houston) their first representation by a California gallery. The young painter opened The Andrews Gallery in fall 2008 in Leucadia, a quaint beach neighborhood in the city of Encinitas in northern San Diego County. He’s also the resident artist at the gallery, with a small studio to pursue his own work in oil and acrylic.

Snyder went to Sarah Lawrence College in New York City, where he studied painting all four years while earning a degree in philosophy and literature. Meanwhile, his parents sold their Fort Worth home and moved out to San Diego. He spent many of his college summers and holidays with friends in France because, he said, “It’s just as cheap to buy a ticket from New York to Paris as it is from New York to San Diego.” In the museums and galleries of Paris and New York City, he soaked up a lot of amazing art, but nothing quite moved him like the “visionary and transformative” work of Ron Tomlinson back in Fort Worth. Snyder also kept up with all his Country Day School buddies.

In summer 2008, Snyder moved out to California after his brother died, to live near his parents. “I didn’t know a soul there [besides my family],” he said. The idea of opening an art gallery had never occurred to him until he saw all the charming mom-and-pop businesses that line North Coast Highway 101 in San Diego County. Although he was a right-brained liberal arts major to the bone, he had acquired a little business experience in college, selling his own paintings and co-founding an annual fund-raiser and auction that exhibited and sold the works of Sarah Lawrence’s visual art students.

In October 2008, he opened the doors of the Andrews Gallery — just as the great recession was intensifying after the crash of Lehman Brothers in New York City. “I think [the bad timing] worked to our advantage a little,” Snyder said. “We got publicity because people were thinking, ‘What kind of fool would open an art gallery now?’ “

The Andrews Gallery focuses on 2-D work: mostly paintings with a little photography and collage. Snyder quickly went about signing up friends from Fort Worth, New York, and Paris to give them their first exposure on the West Coast. He represents Groff, the Hook brothers, another Tomlinson protégé from Fort Worth named Zack Hawkins, and, of course, Tomlinson himself, whom Snyder calls the gallery’s flagship artist. The best-publicized and best-attended show so far has been a solo exhibit of Tomlinson’s paintings called The Language of Abstraction that ran for almost two months beginning last August.

A diverse San Diego County crowd attends shows at the Andrews Gallery: older, more conservative longtime residents; slackers from the local surf culture, high school students who take advantage of the “all ages” policy and occasional live music events (Snyder brought in The Frontier Brothers from Fort Worth for one opening); and educated urban professionals who drive up from the city looking for something edgy. Snyder says the Fort Worth artists have been among his best sellers and often elicit the most dramatic responses from patrons — their shows’ guestbooks, Snyder said, are filled with comments like “engaging,” “mesmerizing,” and “refreshing.”

While Snyder continues to paint, his primary focus at the moment is getting as many people as he can to see — and of course to buy — canvases by the members of the Fort Worth group. To that end, he’s just opened a tiny studio space in downtown San Diego and plans to expand his gallery’s online presence. It’s all part of a campaign to honor and promote those life-changing artistic lessons he received in Tomlinson’s 7th Street studio. He wants other people to see the world the way he was taught to see it by Fort Worth painters.

“Ironically, when you move away from Texas, your Texas identity really comes to the surface,” Snyder said. “I’m fiercely proud of my roots. I want to show everyone how sophisticated Texas artists can be.”

For more information, go to www.theandrewsgallery.com.

A Fort Worth Treasure Returns