The Sundance Film Festival may be known for earnest, small-scale dramas, but it also has been the launching pad for some brutally simple low-budget thrillers as well. Hollywood’s good at entertaining you with the unreal; you and I will gladly watch Jason Bourne dodge bullets, jump off bridges, and outrun explosions, knowing that we’re unlikely to be forced to do those things in our own lives. 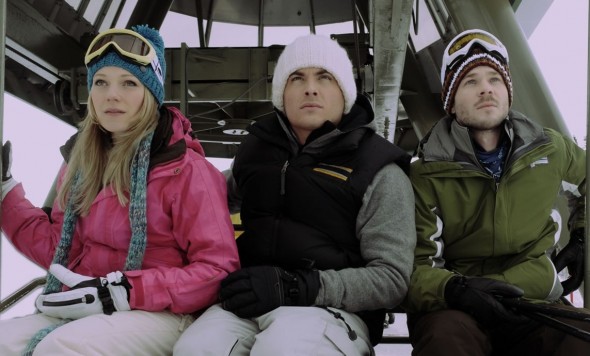 Indie thrillers like The Blair Witch Project (1999) and Open Water (2004) work on another level entirely. They put their characters in situations that you can easily imagine yourself in. These movies set your mind racing as much as your pulse – watching the characters react to being stranded in the woods or the middle of the ocean, you wonder what you would do in their shoes.

So it is with the excellent, gripping Frozen, which premiered at Sundance only a few weeks ago and is already in our theaters. The main characters are New England college kids – a girl named Parker (Emma Bell), her boyfriend Dan (Kevin Zegers), and his best friend Joe (Shawn Ashmore) – who’ve taken a skiing-and-snowboarding weekend at a fictitious Massachusetts mountain resort. Unable to afford lift tickets, they bribe the chairlift operator into letting them on the slopes. The trouble comes on Sunday evening when they go for one last run before the park closes for the week. Through a series of miscommunications, the ski lift stops with them stranded in their seats some 50 feet above the ground. No one knows where they are, no one will be at the park for five days, and there’s a blizzard blowing in. Would they rather freeze to death or fall?

Your first question might be: “What about their cell phones?” Wonderful as those gadgets have been in real life, they’ve been a bane for fiction writers looking for ways to place their characters in situations without help. Writer-director Adam Green never comes up with an adequate explanation as to how all three of these characters are without their phones. This distraction strains credulity, and it could have been easily dealt with (lack of signal, low batteries, or simply setting the movie in some year before everybody had a cell).

Once you get past that, however, the film moves forward with unsparing logic. You don’t need much experience with cold weather to know that when Parker accidentally drops one of her gloves off the chair, it’s a disaster in the making. The film goes into some gruesome detail about the effects of exposure and falling from a great distance on the human body, and when death arrives, it does so in a way that makes sense but is still unexpected. I don’t mind admitting that I screamed like a terrified bunny rabbit during the scene when Parker wakes up one morning to find her ungloved fingers stuck to the metal safety bar. Frozen is an unpretentious little genre movie that works you over on that visceral level. You can’t ask for much more.