When veteran North Texas actor-director Phyllis Cicero got the assignment from Jubilee Theatre artistic director Ed Smith to direct From the Mississippi Delta, she wasn’t familiar with the autobiographical play or its author, Endesha Ida Mae Holland, who rose from severe childhood poverty, horrifying abuse, and prostitution in the Deep South to work as a civil rights activist and outspoken advocate for nonviolent change in the 1960s and ’70s. By the 1980s, Holland had earned a Ph.D. and eventually became a theater professor at the University of Southern California. 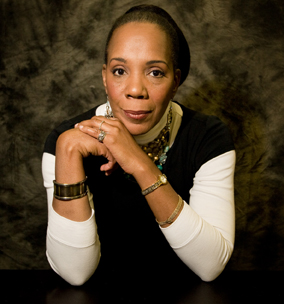 When Cicero first read the script, she discovered the theatrical challenge that Holland had set up for anyone who wanted to produce it: The show consists of three female actors playing 20 different roles, including men and women.

“I was overwhelmed by the sheer number of characters,” said the 50-year-old Cicero. “I’d never done this type of show before. I thought, ‘How does the actor go from playing this girl to this guy to another girl back to the first girl? How does she link them all?’ But I knew if we did the play with minimal props and stunning actresses, we could pull it off.”

Cicero was able to find her “stunning actresses” — Evette Perry-Buchanan and Charlet Dupar portray Holland at different stages of her life, as well as other characters. Yolanda Davis plays Aunt Baby, Holland’s mother and a revered midwife in their poor Mississippi community. The director also got some expert input from Smith, who’d worked with Holland to help shape the script before its first, Oprah Winfrey-financed Off Broadway run in 1991. To tighten the show for that original run, Smith had advised that Holland cut the 11th and final scene. The playwright wasn’t thrilled with his suggestion, but she agreed to the change.

Two decades later, Cicero was able to convince Smith that the ending Holland preferred, which featured a kind of ghostly refrain of all the women’s voices that had affected the author’s journey, should be reinstated.

“Ida Mae has gone on to glory, and I didn’t want her coming back to visit me in the middle of the night about that 11th scene,” Cicero joked. (Holland died in 2006 at the age of 61.) “But as a black woman myself, I thought it was important to hear from the women who had inspired Ida Mae when she was growing up.”

Some of the wisdom came from the older town prostitutes that Aunt Baby frequently sheltered in her rickety little Delta shack.

“It’s a cliché to say it takes a village [to raise a child], but it’s true,” Cicero said, remembering her own childhood in Tyler, where neighborhood adults had what she laughingly calls “ass-whipping privileges.” “If you acted out, you could get your ass whipped by someone outside the family,” she said. “And that meant you’d get a second ass-whipping back home as punishment for the first.”

Cicero speaks proudly of such tough-love discipline — it helped land her where she is today. She studied theater at the University of Texas at Austin and Columbia University. In addition to her prolific work as a stage director and a voice teacher, she’s got a mile-long list of film and TV roles to her credit, including many years playing Stella the Storyteller on the PBS kids’ show Barney. At Jubilee, From the Mississippi Delta is the fifth show she’s directed and her first under Smith’s artistic directorship.

On the subject of Black History Month, she’s happy that African-American actors, directors, and designers have a wide range of employment opportunities right now that, frankly, aren’t so plentiful during the rest of the year (except, of course, at Jubilee). But she’s also wary of the grave sense of duty that the month brings to the telling of black people’s stories. Despite all of the undeniable sorrow in Holland’s script, Cicero was determined to make the Jubilee production something more emotionally rich than what she calls “another depressing ‘Negro play'” for February.

“I’m a wisecracker,” she said. “I look for the humor in tough situations. That’s how it is with a lot of black people, isn’t it? We endured slavery and segregation and humiliation, and we brought jazz music and comedy and great cooking out of it.”