When he died, Leo Tolstoy was basically an old hippie. Immensely rich and famous from authoring War and Peace and Anna Karenina, the Russian count had turned his considerable energy to social causes and essays delineating his idiosyncratic approach to Christianity. His followers set up a commune a few miles away from his ancestral estate, devoted to living according to his philosophical principles, which included celibacy, vegetarianism, rejection of private property, and nonviolent passive resistance against injustice. This last bit had a profound effect on Gandhi, with whom Tolstoy corresponded in his final year of life. 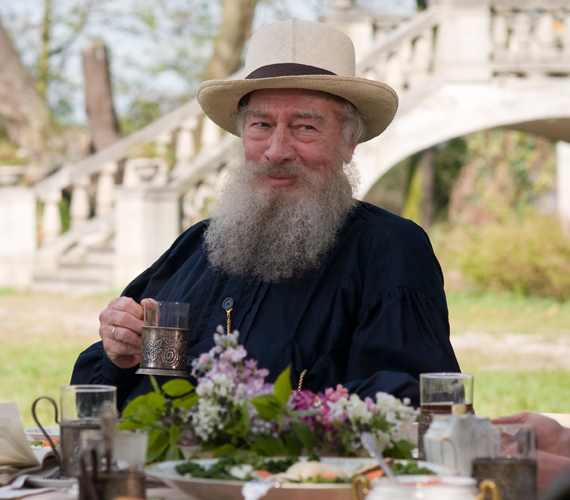 This late period was detailed in Jay Parini’s 1990 novel The Last Station, whose title refers to the train station at Astapovo where the 82-year-old Tolstoy died of pneumonia while fleeing from home after an argument with his wife. Now, with the 100th anniversary of Tolstoy’s death coming up in November, the movie version of the book has come out, with two Oscar nominations to recommend it. Wait, no, “recommend” is the wrong word. It’s still not worth seeing.

Parini’s novel was narrated by various characters in turn, but the movie is seen through the eyes of Valentin Bulgakov (James McAvoy), a 23-year-old Tolstoy-worshipping aspiring writer who’s overwhelmed at the chance to work for his idol as a private secretary. The aged author (Christopher Plummer) doesn’t disappoint him, behaving generously and urging the young man to address him familiarly as Lev Nikolaievich. However, from the start Valentin is caught up in an unlovely family scrap over the old man’s money. Tolstoy disciple Vladimir Chertkov (Paul Giamatti), who has secured Valentin his job, wants to convince the master to sign away all his copyrights so that his writing will reach the entire world. This makes him sworn enemies with Countess Sofia Tolstaya (Helen Mirren), who wonders what the family will live on if Chertkov gets his way. They both enlist Valentin as a spy, and the house is full of other spies as well, including some of the Tolstoy children.

The money issue is one of many reasons why the Tolstoys’ marriage is full of screaming arguments, with Sofia frequently undercutting her reasonable financial concerns by throwing theatrical hissyfits. Early in the movie, she threatens to kill herself by jumping in front of a train like Anna Karenina. (Lev’s response: “You don’t need a husband. You need a Greek chorus.”) Later on she pitches another tantrum at Chertkov and one of her daughters (Anne-Marie Duff) in front of a bunch of reporters, and only as Valentin is escorting her away does she think, “I’ve behaved rather badly, haven’t I?”

The movie wants to be an examination of a frayed marriage between temperamental creative people. Instead, it feels more like a platform for Plummer and Mirren to work themselves into an award-baiting lather. Both actors snagged Oscar nominations, so it clearly worked. Nevertheless, these lions of the stage and screen have been far better elsewhere. Sofia is supposed to be a needy and pathetic person who acts out because she feels neglected. I’m not sure that “needy and pathetic” are in Mirren’s repertoire. Whatever the reason, the scenes of Sofia giving Valentin sage advice about politics and romance feel like they come from a completely different movie than the ones with her breaking the crockery and firing off guns in the house. For his part, Plummer is too open here, never showing the workaholic self-absorption and devotion to higher causes that drives Sofia to such extreme, self-defeating behavior. His Tolstoy comes off as a nice old man with a shrew for a wife, and that’s not how it should be. The scene in which the Tolstoys have makeup sex after one of their fights is a cutesy, overlong low point for both the actors and the movie.

On top of all this, Valentin’s role in the story is that of an observer, but he’s made to be way too passive, standing by and saying nothing long past the point when he’d still be shocked by the histrionics in the Tolstoy house. It’s hard to believe that the real-life Bulgakov would have been so inert, even if he was overawed. The character is saddled with a tic of sneezing when he’s nervous (a Chekhovian comic device that’s really annoying here) and a stubbornly uninteresting romantic subplot with a free-spirited young woman at the commune (Kerry Condon, making out better than any of her more famous co-stars).

It’s cold comfort to know that even if the performances had been better, writer-director Michael Hoffman still would have stifled them in good taste. The Hollywood veteran has essayed wacky comedy (Soapdish), contemporary romance (One Fine Day), and Shakespearean farce (A Midsummer Night’s Dream). The only thing all those movies had in common was that they turned out dull and staid. The Last Station succumbs to the same fate, and years from now moviegoers will look back on this movie and wonder how it got its Oscar nods. Chalk it up to lack of imagination.