Bart van Bemmel talks quickly, and I’m not sure whether that’s how he usually rolls or whether it’s because he’s eager to tell me about his film project during his 50-minute free period. (It’s probably a bit of both.) This UNT graduate teaches social studies at Dan F. Long Middle School in Carrollton, but in his off hours he writes movie scripts with fellow teacher Jason Wheeler. Before he goes back to discussing the Cold War and the breakup of the Soviet Union with his sixth-grade class, he’s keen to tell me about Butterscotch, the short film that’s now set to become a full-length feature directed by Fort Worth director Jon Keeyes. 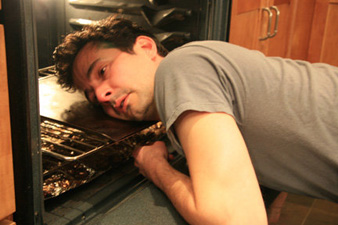 Even though van Bemmel went to UNT, he never ventured near the film and TV production facilities there, focusing instead on completing his education degree. “I was living in fear of my father to get straight As or get kicked out,” the 34-year-old teacher remembered. After graduation, he got his teaching job, rose to the rank of department chair, and met Wheeler, who came on as a long-term substitute teacher and eventually joined full time. “We loved teaching and movies,” said van Bemmel. “Eventually we started writing scripts together. I don’t see how anybody does it without a partner.”

Van Bemmel had already written some children’s fiction but found movie scripts for adults to be a valuable outlet. “Jason and I are dark and twisted — when you work with kids every day, you become dark,” said van Bemmel, quickly adding that he loves teaching regardless. “When I started writing, I was like, ‘Wow, I can cuss. I can tell dirty jokes.’ ”

Butterscotch is about three suicidal patients who meet in a psychotherapist’s waiting room and plan a final road trip together before killing themselves. (The title comes from one character’s notion that people tend to prefer all other types of candy to butterscotch.) Mutual friend and local actor Reece Rios read the script and passed it along to Keeyes, who recommended that the film be made as a short and offered his own services. Calling the script “dramatic and hilarious,” Keeyes relished the chance to make a movie different from his usual fare. “As a director, there’s nothing greater than having characters with many emotional layers and surprise story twists,” he said. The filmmakers raised money through the movie’s web site at www.butterscotchfilm.com and shot it last March (with Rios in the lead) at van Bemmel’s dentist’s office, which he imagined as a setting for the story.

The film has been accepted into five festivals at press time, but Keeyes, van Bemmel, and company aren’t letting the grass grow. They’ve already lined up name talent for the feature version, securing commitments from Jason Priestley (as the male lead) and Corbin Bernsen. They made a special effort to secure Lindy Booth as their lead actress. “I saw her in [the 2005 psychological thriller] Cry – Wolf and just knew ‘That’s our Charlie.’ ”

Without a backup option in mind, the writers flew to L.A. and lobbied the red-haired Ontario native (better known from TV dramas such as October Road and The Philanthropist) and convinced her to sign on. Keeyes is now in the process of lining up financing. “We’re feeling good that it’s going to come together,” said the director.

For now, the feature and van Bemmel’s teaching job are enough to occupy him. The shooting may not have started yet, but he’s accomplished one thing with his story: His dad is now a fan.