One of the things that inspired Kathleen Anderson Culebro to write La Llorona, her supernatural-tinged drama currently being staged by Amphibian Productions, was the attempt by Taco Bell to open a series of fast-food restaurants in Mexico City in 1992. 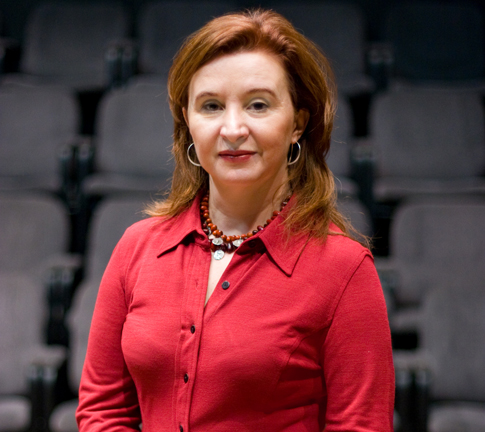 “It failed miserably,” recalled Culebro, a Mexico City native and Amphibian’s artistic director. “I remember the newspaper ads they took out to explain American-style tacos to Mexicans. It was almost surreal. I’m always amused by how little the two countries understand each other.”

Cultural dissonance and entrepreneurial clumsiness inform La Llorona, in which a North American businessman moves with his wife to Mexico’s capital city and attempts to open a chain of (fictional) Taco Tower eateries there. They temporarily lodge with a Mexican couple who need the rent money for extra income. Both women are seeking to get pregnant, and some fateful misunderstandings result in tragedy. All the while, La Llorona, a mystical Latin American figure whose name translates in English as “the crying woman,” wanders spectrally through the show to warn of impending disaster.

Culebro, who co-founded Amphibian Productions 10 years ago with theater artists from Rutgers and TCU, began studying with the TCU theater department at the age of 33. She’d been a regular playgoer and a “closet playwright” for years before she ventured onto the stage professionally. Three of her scripts have received productions thus far –– La Llorona made its debut three years ago at the Beckett Theatre Off-Broadway in New York City. The frustration of languishing between cultural identities has been a recurrent theme in her work.

“I grew up in Mexico City with blonde hair and blue eyes,” she said, noting that her father is Mexican and her mother is American. “We spoke Spanish and English at home. I’ve been told by some people, ‘You can’t be Mexican. You’re too educated.’ I’ve also been in the company of [Latinos] who have dark hair and dark skin but who don’t speak a word of Spanish.”

As in La Llorona, many of Culebro’s plays contain both Anglos and Latinos struggling under the almost inevitable curse of miscommunication. But she insists that every character she satirizes is just a different part of herself that she’s chosen to make fun of. She usually sets out to write witty but anarchic comedies a la one of her major influences, John Guare (Six Degrees of Separation), but they often veer into the bleaker territory of Wallace Shawn (Aunt Dan and Lemon), whose monologue-driven shows give voice to charming people who gradually reveal themselves to be monsters.

Over the years, Amphibian Productions has distinguished itself as a Fort Worth arts entity that stages shows and readings both here and in New York City. For the Fort Worth production of La Llorona, Culebro has imported New York director Tlaloc Rivas to help refine the script. As a result, the ending has changed, and La Llorona has gone from an onstage character to an unseen presence hinted at by light and sound effects. Culebro is happier with these revisions than she was with what transpired in the Off-Broadway version.

In the often combative process of collaboration in theater, she is fearless about subjecting her plays to the opinions of fellow artists. In fact, she said, “I welcome it. I’ll try anything, to the point where you could almost say I don’t trust myself. I had lost control [of the New York staging of La Llorona], and Tlaloc helped me move it back in the direction it needed to go.”

Culebro is thrilled that her dark script about intercultural chaos and the power of folk legends to change destinies is enjoying a bigger and more diverse audience than Amphibian Productions has seen in a long time. She’s currently preparing another script with the working title Just Because You’re Paranoid (Doesn’t Mean They’re Not Out to Get You). She hasn’t decided whether to debut it in Fort Worth or New York.

“I’ve settled into Fort Worth as a very comfortable place to produce shows,” she said. “It’s like putting on a play for family. I still haven’t figured out what works for New York audiences. There, I’m producing shows for strangers. But you need the input of strangers, of course.”