A little more than two years ago, Paul Edwards decided that the time had come to chase his lifelong dream. He owned a successful safety food consulting business that brought financial security to his family. His two children were almost out of high school. Thinking that all the stars were aligned, he sat his son and daughter down and announced that he was ready to pursue a career in standup comedy. 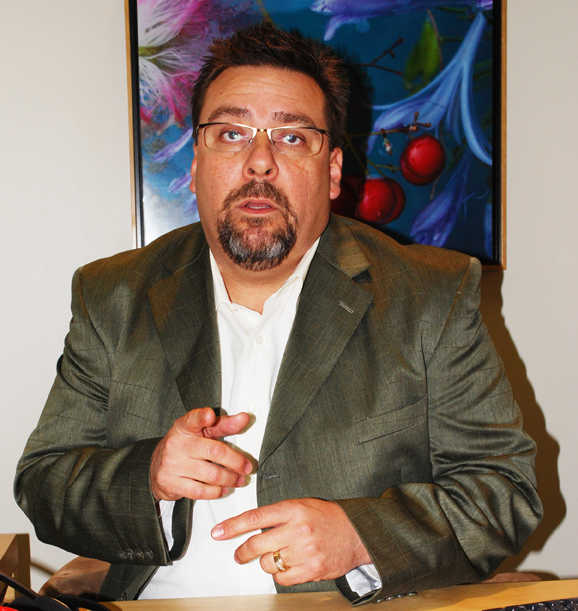 “They looked at me with concern, and the first thing they said was, ‘Dad, you’re not funny,’ ” the 49-year-old Edwards recalled with a laugh. Nevertheless, he’d nurtured professional comic ambitions ever since he was a kid growing up in south El Paso. His grandfather took him to see movies starring the legendary Mexican comedian Cantinflas, an early idol. Flip Wilson and Rodney Dangerfield inspired him with their TV routines. Plus, he acquired what he considered a wealth of material growing up near the Rio Grande: With a Mexican mother and an Anglo father, Edwards didn’t fit comfortably into other people’s racial categories. The white kids accused him of being a “wetback,” and the Latino kids often referred to him as a “gringo salado,” which translates from Spanish slang into English as “salty cracker.”

Armed with such fertile memories, Edwards eventually moved to Fort Worth, founded his business, got married, had kids, got divorced, and decades later still yearned to make strangers laugh. In 2008, he began taking standup classes under Fort Worth comic and radio personality Dean Lewis as well as improv training at Four Day Weekend. He regularly hit open-mic nights at clubs across North Texas. With an eye toward using YouTube as a self-promotional tool, he bought a digital video camera and shot a series of brief one-man comedy routines in which he played a business owner with a very select clientele.

“The idea is that I’m helping white clients who’re unhappy with their lives in America sneak across the border into Mexico,” he said. “It’s a satire on people’s expectations that only Mexicans want to escape their country and cross the border illegally. [During the routines] I’m taking phone calls from people who want to leave the U.S. because they can’t find a job or they don’t like the political situation or they’re looking for romance. The joke is that I’ll only help white Americans.”

Edwards had shot about 10 digital skits that he called Illegal Gringo Crosser when he met Adam Dietrich, co-founder and artistic director of the multimedia group The Butterfly Connection, while serving as an extra on a music video that Dietrich was directing.

“I thought the concept was funny,” Dietrich said, “but it’s hard for one person to keep an audience’s attention with an extended monologue. Plus, Paul didn’t have a creative partner to tell him, ‘This works, but that doesn’t work.’ I told him to develop it into a 30-page script and I’d look at it.”

Edwards returned with a script draft and his checkbook to finance a 22-minute video pilot for Illegal Gringo Crosser. He and Dietrich worked together to flesh out the show with additional characters and dialogue. Dietrich, through his local theater and film connections, was able to supply a cast and crew as well as a shooting location and post-production facilities in the Butterfly Connection’s offices. He also directed and took a supporting role as a Canadian character who wants Edwards to revise his “gringos only” policy. The bulk of the episode was shot over one grueling weekend. Edwards claims he only reluctantly agreed to play the lead role of “Paul Edwards,” the besieged human trafficker whose ethnicity is ambiguous to his clients and employees.

“I’m good at ad-libbing, but I’m not an actor,” he said. “The people Adam brought to the set were real actors, very professional. I had to keep apologizing for forgetting my lines.”

Edwards and Dietrich have high — but, they think, realistic –– goals for the pilot. At the very least, they see it as a promotional video for all of the creative and technical resources that can be tapped to complete a professional project in North Texas. On the higher end, they’d like to attract enough financial backing to shoot a few more episodes and sell the show to a premium cable channel like HBO or a basic cable channel like Comedy Central. Of course, they can also upload it as a web-only series –– Edwards has purchased the domain name www.illegalgringocrosser.com –– and promote the hell out of it. Such are the endless, interconnected possibilities in the age of New Media.

The bottom line, Dietrich said, has been met: “To take a strong concept and execute it well with local talent and to create something we’d want to watch. Now we’ll figure out how to distribute it.”

Edwards is still honing his skills as a standup comic at area clubs. His kids still don’t think he’s the funniest guy on the planet, but if Illegal Gringo Crosser finds success, they might have to reconsider their sense of humor.