Two things you should know off the bat about Greenberg. First, it’s a deeply unlikable movie. Second, I liked it. You see, most movies have main characters who are nice people, because moviegoers tend to prefer the company of such characters. However, the world is full of people who aren’t nice, and it’s a brave filmmaker who makes a movie about someone who isn’t. 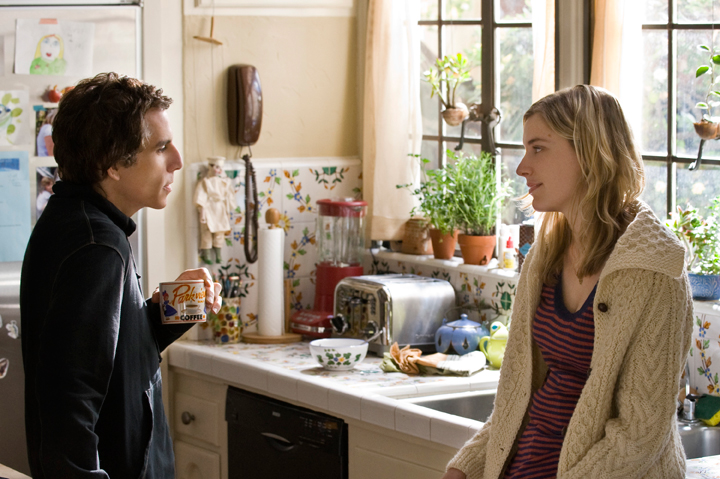 This is the specialty of writer-director Noah Baumbach, and together with his previous two movies (the autobiographical The Squid and the Whale and the exceptionally bleak Margot at the Wedding), Greenberg forms a veritable trilogy of appalling human behavior. Of course, bravery alone won’t guarantee that a movie will be good. The best way of making such a character tolerable for the length of a movie is if the director, writer, and actor can capture the full measure of the character’s horribleness, and that is indeed what happens here.

The film begins with Florence (Greta Gerwig), a 25-year-old personal assistant to prosperous L.A. businessman Philip Greenberg (Chris Messina) and his family of four. When the Greenbergs go on vacation overseas, Florence is left to take care of their house, their dog, and Philip’s brother Roger (Ben Stiller), a 40-year-old failed musician who’s returned from New York after an extended stay in a mental hospital. The dog gets sick and needs extensive medical care, but it’s Roger who gives Florence far more trouble.

If you met Roger in real life, you’d tell him to lose your phone number, and you might even move out of your house to get away from him. He sports a bohemian-style head of unkempt graying hair, a wardrobe of faded vintage band t-shirts, and an air of bewilderment as to why he’s not more successful in life. He’s resolved to do nothing for a while, but in reality he’s flailing about in all directions. He once had a shot at fame, but he balked at the record label’s conditions, and his bandmates left him in disgust. Now he spends much of his time firing off letters of complaint about such things as Starbucks, the Pakistani government, and the traffic noise in New York City. (He complains about the latter even though he no longer lives there.) A skilled carpenter, he starts making a doghouse that he’ll clearly never finish, and he’s working in Phil’s house because he’s pissed off the other workmen in the studio they share. Typically, he blames this on other people: “It’s very political over there.”

The prospect of joining a table of a half-dozen people at a club makes him break out in a cold sweat. He’s thin-skinned and incapable of self-criticism, traits that are combined with a maddening tendency to badger other people into telling him what’s wrong with him and then taking it badly when they do. Even when he’s thoughtful of others, he manages to ruin it. In one scene, he impulsively throws a pool party for the neighborhood children but then spends the afternoon holed up in the kitchen, treating his guests like they’re diseased and bitching about party crashers and not having the right kind of food on hand. Florence falls into a sexual relationship with him out of some combination of pity and mistaking his intransigence for some sort of integrity –– and because she’s a mess herself.

Stiller has played jerks before (in failed comedies such as Duplex and The Heartbreak Kid), but this is the first time that it really takes. His irascible, frazzled comic persona meshes nicely with this character, and he fully commits to Roger’s bastardliness, especially when Roger treats Florence like crap. The movie climaxes with a great, furious scene between Roger and a sad ex-bandmate (Rhys Ifans), as they definitively end their friendship amid an exhumation of all their long-buried issues.

The pyrotechnics in Stiller’s performance are easy to appreciate, but we shouldn’t forget Gerwig, the young actress/filmmaker from the so-called “mumblecore” movement whose incandescent screen presence lit up Baghead and LOL and even substandard stuff like Hannah Takes the Stairs. Her unforced sweetness is a quality that the movie badly needs, and she provides the film’s most memorable visual when Florence spends the night before her scheduled abortion getting hammered in her apartment and singing along to Paul McCartney’s “Uncle Albert/Admiral Halsey.”

Yeah, about that last bit: The news that Florence is pregnant by her ex and in need of an abortion drops like a bombshell on both Roger and us. Given the skittishness of both Hollywood and indie films on this subject, this movie handles the storyline with impressive honesty. Much like Baumbach’s other films, Greenberg doesn’t come to a proper ending so much as it stops at a certain point, but this plot twist allows the movie to leave off with Roger earning a tiny measure of redemption and perhaps growing up a little bit. This is what makes this frequently exasperating drama such a rewarding experience: its insight into the jerks of the world and the way it lets the rest of us understand them. l