Eleven years ago, a great Japanese film came out in American theaters under the title After Life, a joyful meditation that imagined all of us going to a Buddhist temple/studio after our deaths to have our favorite memories made into movies. This is not to be confused with the current film After.Life, a good-looking but laughably absurd supernatural thriller. I’m not sure why there’s a period in the title, but that’s the least of the questions I have after wasting a couple of hours on this. 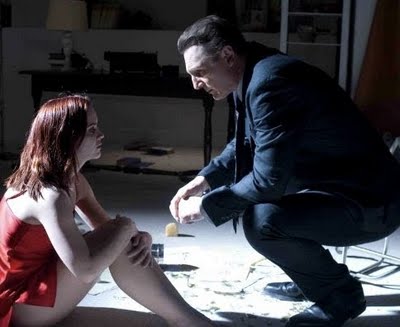 Christina Ricci plays Anna, a hypersensitive schoolteacher set to marry an up-and-coming business executive named Paul (Justin Long, whose presence only reminds us that he starred in the far superior Drag Me to Hell last year). Anna spends much of the early going treating Paul badly and behaving like a psycho, behavior that’s only partly explained by the subsequent introduction of Anna’s icy, wheelchair-bound mother (Celia Weston). While driving away from yet another fight with Paul, Anna gets into a car accident and regains consciousness in a funeral home. The home’s creepy director Eliot (the suddenly ubiquitous Liam Neeson) informs her that she has died, explaining that she can hear him because he has a gift that allows him to speak to the recently deceased. Is he telling the truth, or is he a serial killer who’s trying to get her to consent to being buried alive?

To sustain this rickety premise, director/co-writer Agnieszka Wojtowicz-Vosloo contorts the story beyond all plausibility. We’re supposed to ignore the unlikelihood of Paul being kept away from Anna’s body, or her using a phone to call him instead of calling 911, or Anna’s young student (Chandler Canterbury) becoming Eliot’s disciple instead of helping his teacher. If all this isn’t ridiculous enough, the lengthy debate between Eliot and Anna over whether she’s dead recall the “I’m not dead yet” scene from Monty Python and the Holy Grail. I’m pretty sure the filmmakers weren’t aiming for that.

Wojtowicz-Vosloo should have played this for comedy. Eliot’s no compassionate usher into the afterlife; instead, the dead people annoy him. (“You people all say the same things!”) This could have led to something like the Ricky Gervais vehicle Ghost Town from a couple of years back. Sadly, Eliot’s less like Ricky Gervais and more like Jigsaw from the Saw movies, full of soul-sapping harangues about how we all deserve to die because we don’t appreciate our lives enough to satisfy him. Much like the Saw movies, this one never thinks to call him on what a load of crap this is.

After.Life does have a coherent visual scheme, with antiseptic whites and funereal blacks and grays contrasted with shocking reds, like Paul’s car or Anna’s slip. (For those who are interested, Ricci spends much of the movie wearing either that slip or nothing at all.) This is pleasing to the eye, albeit unsubtle, but it’s still not nearly enough to make sense out of this abortive exercise.