How do I describe the awesomeness of Kick-Ass? I could say this is the superhero flick that Watchmen desperately wanted to be, but that doesn’t quite cover it. I could call it a comic book fan’s dream come true, but then I’m not a comic book fan, and I still loved the movie as if it had been made especially for me. Maybe I should simply say that this movie left me feeling warm and glowy inside, which is a pretty neat trick for a subversive, blood-soaked superhero action film. 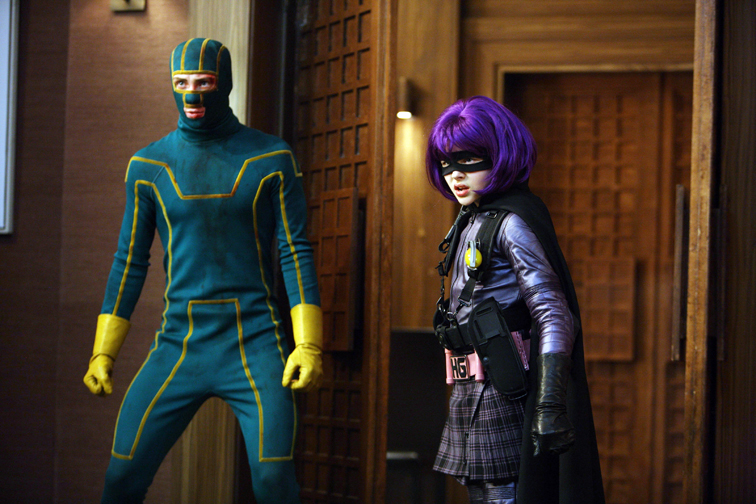 It starts with Dave Lizewski (Aaron Johnson), a terminally unhip New York City high school kid who doesn’t even have enough of a profile to qualify as a nerd or a geek. Obsessed with comic books and wondering why nobody tries to be a superhero in real life, he buys a used green wetsuit, restyles himself as a masked crime fighter, and calls himself Kick-Ass. The trouble is that fighting crime is hard without superpowers or any kind of martial-arts training, which explains how Dave’s disastrous first foray as Kick-Ass lands him in a hospital for several months.

This ignites a dense but easily followed plot adapted from Mark Millar’s comic book series that applies a dose of harsh real-world logic to the conventions of superhero fiction. This material presents extraordinary difficulties when it comes to tone. The setup of ordinary people acting like superheroes is funny, but it also creates an unusual sense of danger because these folks can be hurt as easily as you and I can. British director/writer Matthew Vaughn responds with a breakthrough performance, creating a volatile atmosphere in which horrible violence and hysterical comedy can erupt at any time. (In this, the movie feels much closer to the Kill Bill films than to the earnest Watchmen.) Despite the stylized cartoonish setting, the characters have emotional depth, and the movie generates real pathos when a major player is killed.

Events soon spiral beyond Dave’s control, thanks largely to Mindy Macready (Chloë Grace Moretz), an 11-year-old girl raised to be a finely tuned killing machine by her father (Nicolas Cage), who secretly bears a grudge against mafia boss Frank D’Amico (Mark Strong). After Kick-Ass becomes a YouTube sensation, the Macreadys take to the streets as Hit Girl and Big Daddy, respectively, and start mowing down Frank’s mobsters. All the carnage freaks out Dave, especially after Frank blames Kick-Ass for it and puts out a contract on Dave’s alter ego. It’s mostly up to Hit Girl to pull Kick-Ass out of the fire. This havoc-wreaking, profanity-spewing goblin child spends much time slicing up bad guys with knives or riddling them with bullets, and she comes to embody the movie’s gleeful anarchic spirit.

The role is a terrific showcase for Moretz, who looks good twirling a double-bladed spear. The other actors evoke a world where everyone except Hit Girl is self-consciously striking manly poses and pretending to be superheroes. Johnson, an English newcomer with a terrific American accent, does well to capture the determined but overwhelmed kid underneath the superhero costume, while Cage’s hilariously stilted line readings are reminiscent of the gonzo performances that he gave back in the ’80s and early ’90s, when he was one of the most exciting actors in movies. Let’s not forget Strong, the balding Englishman who appears to be Hollywood’s villain of choice at the moment, finding subtle, understated humor in a part that could have easily been a caricature.

Vaughn and co-writer Jane Goldman ring some ingenious changes on the plot, and they’re particularly smooth at handling the subplot wherein Frank’s nerdy son (Christopher Mintz-Plasse) tries to take down Kick-Ass by posing as a costumed sidekick. Despite the misstep of locating Kick-Ass’ personal web site on MySpace instead of Facebook, the script still proves insightful about how its characters use internet social media, something that many movies are tone-deaf about even at this late date. The film’s references to comics, other movies, and TV programs show deep respect for the tradition of superhero fiction. They also help tweak our expectations, as when Dave’s voiceover narration points out that just because he’s narrating, it doesn’t mean he’s going to survive the film. (“Did you not watch Sin City? Sunset Boulevard? American Beauty?”)

The script’s intelligence goes beyond mere cleverness, though. Millar’s comic series attacks superhero fiction as the inspiration for sociopathic vigilantes and well-meaning idiots. The movie acknowledges the truth in this (especially in the opening sequence on top of a skyscraper), but at the same time it demonstrates how superhero stories show us the best and worst parts of ourselves and help a dweeb like Dave rise to the occasion and fight for what’s important to him. This makes the film better than its source, and it’s why comic book fans will treasure it.

And if all that’s too intellectual, Kick-Ass is also a lot of fun. Made largely outside the studio system, this movie takes risks that Hollywood would never allow in an expensive blockbuster. That’s how this satirical take on superheroes achieves its intoxicating mix of hard-core action and genre-warping humor. There’ll be other superhero movies in the coming months, but how will they ever measure up to this? l