You may have gotten your dose of movie satire last weekend at Kick-Ass. If that’s the case, I’m betting you had a better time than I did. I went to see The Joneses, which starts off quite well. That makes it all the more disappointing to see it end so badly, yet it remains a film that’s worth checking out in some form. 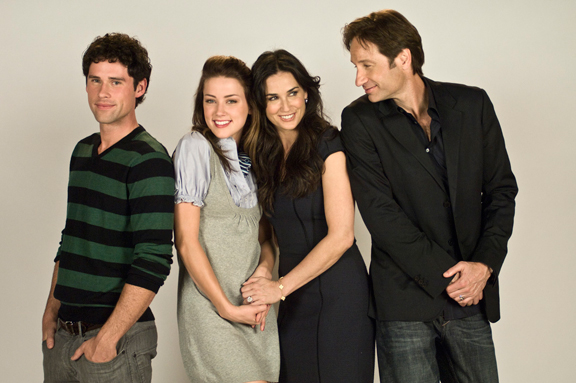 The movie starts with the titular Jones family — father Steve (David Duchovny), mother Kate (Demi Moore), and high-school kids Jenn and Mick (Amber Heard and Ben Hollingsworth) — moving into an upscale neighborhood somewhere in America. They’re very nice and live lavishly, but there’s something not right about them. Steve and Kate are vague about their occupations, and all four of the Joneses are way too eager to cozy up to the neighbors and the other kids in school. When the family’s alone, they talk in businesslike cadences about infiltrating local organizations and gaining people’s trust. Steve coolly looks around and says, “We could really do some damage in this town.”

The movie’s setting us up to think that the Joneses are cult members or a sleeper cell of terrorists, but they’re actually far scarier than that. They’re marketing people. Unrelated to one another in real life — which makes it somewhat less icky when Jenn takes her clothes off and crawls in bed with her “dad” — they’re posing as a shiny, happy, wealthy family with possessions to be envied by the neighbors, including all the latest in cars, home furnishings, beauty products, sports equipment, video games, tech gadgets, and other high-end consumer goods. The Joneses are effective salespeople precisely because they don’t present themselves as salespeople. They’re clever, too; when one alt-y girl (Christine Evangelista) comes up to Mick at a party and expresses dismay over their parents’ crass overt materialism, he gets high with her, tells her what she wants to hear, and eventually uses her to push products appealing to the counterculture.

This is a fantastic setup for a satire, it’s not too far removed from what’s done in real life, and it works like a charm for a while. Writer-director Derrick Borte (a first-time filmmaker from Germany) sets a light tone, while cinematographer Yaron Orbach and production designer Kristi Zea conspire to make everything in the Joneses’ house look tastefully hip. I especially like the life-size, black-and-white, artfully casual family photo on the wall that looks like something out of a fashion magazine spread. The movie doesn’t say enough about the role of pop culture in advertising, but when Kate gets the other housewives to buy her chic jogging outfit simply by wearing it, you can see how celebrity-oriented publications do the same thing, not least because Demi Moore frequently pops up in those publications in real life.

The story is goosed by some savory comic tension between Kate — the ambitious, earnest, micromanaging boss of the unit — and Steve, the newest member of the sales team who annoys her by joking in private about the absurdity of what they’re doing. This material plays directly to the strengths of Duchovny and Moore, and the two leads keep the movie humming along.

So what goes wrong? Basically, Borte tries to make the Joneses into human beings. Jenn is hiding a taste for older guys, Mick is hiding a taste for guys in general, and Steve falls in love for real with his fake wife. None of it rings true, especially the part about Jenn getting her heart broken by a married middle-aged guy who has his nickname, “The Hammer,” stenciled on his yacht. (Yes, the hammer is his penis. Classy!) Steve’s attempts to get the Joneses to act like a real family even when nobody’s watching could have provided a vein of humor, but the movie treats this seriously, to unrewarding effect.

The script’s moralizing lands with a huge thud when it turns to the Joneses’ next-door neighbors (Gary Cole and Glenne Headly), who are spending themselves into bankruptcy trying to keep up. The tragic ending of this subplot is eminently logical, but it still jars with the tone of the rest of the movie. The effect this has on Steve yields some unfortunate results when it comes to the acting. Though Duchovny has a flair for teasing light comedy, playing a guy who’s suddenly struck by a crisis of conscience proves to be beyond his talents.

The movie’s so much smarter and funnier when it focuses on how large corporations, and indeed our friends and neighbors, get us to buy things we don’t need. If only Borte had kept his attention on that, The Joneses might have been the great advertising movie for our viral-marketing age. Instead, it only rates as an interesting failure.