Marginally less annoying than the British movie that it’s based on, Death at a Funeral stars Chris Rock as a tax accountant/unpublished novelist named Aaron who’s dealing with a host of troublesome family issues after his father’s death. His successful novelist brother Ryan (Martin Lawrence) shows up to hit on attractive women at the ceremony and weasel out of his share of the funeral expenses. 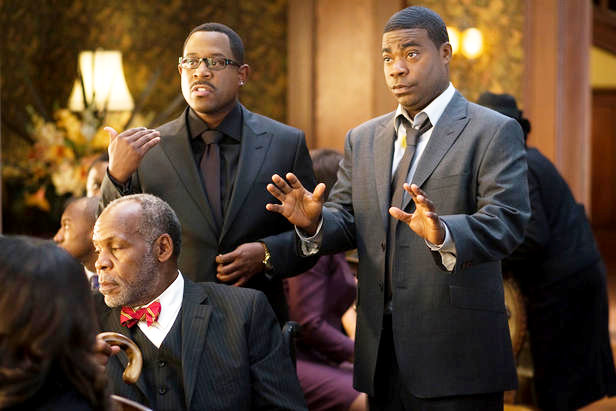 Aaron’s wife (Regina Hall) is feeling heat from his mother (Loretta Devine) to produce grandchildren. The funeral home delivers the wrong corpse, and Aaron’s cousin Elaine (Zoë Saldana) gives her fiancé (James Marsden) a Valium pill that turns out to be LSD. That’s all before the father’s secret gay lover (Peter Dinklage, the only actor reprising his role from the original film) turns up with sex photos and tries to blackmail Aaron and Ryan.

The main reason why this remake works better than the original is that the gay sex is more scandalous in this prosperous African-American setting than it was in an upper-class English setting. Let’s face it: This is not a storyline that you’ll see in a Tyler Perry movie. Since enough of the original script has been used, Dean Craig, who wrote the British film, is credited as the sole writer here. However, the U.S. version finds some good jokes at the intersection of race and homosexuality, from the debate over whether watching Dreamgirls makes a man gay (Aaron and I both vote “no” on that) to the new meaning given to the phrase “on the down low.” The ensemble here improves on the original’s, with Lawrence seeming to be freed from the pressure of snagging every laugh for himself and turning in a nicely subdued performance. In the same vein, Columbus Short thankfully plays the family drug dealer as a clean-cut college kid rather than a gangsta.

Unfortunately, this movie is hampered by the original’s limitations. Too many of the jokes and situations are easy to see coming, and too many of the characters aren’t likable. The cast has some dim spots, too, with Luke Wilson barely doing anything as Elaine’s clingy ex and Tracy Morgan doing way too much (as usual) in the role of Aaron’s germ-phobic cousin. In a part that requires Marsden to spend the entire movie acting stoned, he’s fine, but he’s no match for Alan Tudyk in the original. Director Neil LaBute handles all the farce professionally, and as was the case with his underappreciated 2008 thriller Lakeview Terrace, he proves himself willing to explore racial issues that other filmmakers (black and white) are skittish about, within the confines of generic entertainment. It all adds up to no more, though also no less, than an agreeable piece of throwaway farce.