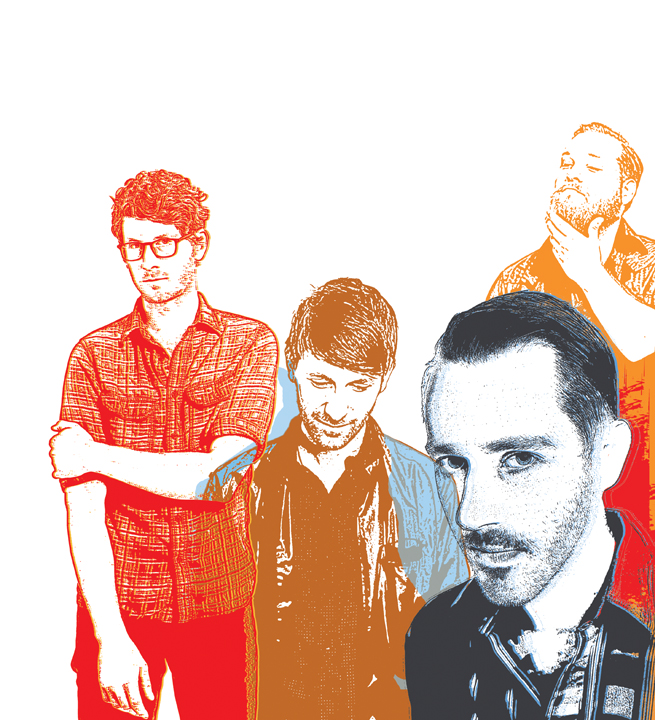 ’s premier indie-rock quartet, The Burning Hotels, have been working that hard since forming about six years ago. To the Hotels’ relatively small catalog, they have just added an amazing collection of brash, angular songs that are stylishly sterile –– and seemingly created to be kicked out live. Both the pretext of Novels and the songs themselves manifest a singular vision: that of four young musicians who want to come to your town, play their music for you, drink a beer and maybe do a shot with you, and then head off to the next town.

“I think our live shows are probably the best thing about what we do,” co-frontman Chance Morgan said. “When you think about all of the bands that you like, they did it for years before they ever hit it big, and they toured their asses off. They’re playing the same clubs we’re playing now, with anything from 10 to 100 people, and you just have to work.

“It would be nice to have [our music] pay our bills, to not have day jobs,” he continued. “But I think we just need to be on the road as much as possible, to get that CD in more hands so that we can have more fans. And I think that’s the biggest thing.”

The Hotels will tour the and East Coast, playing with a lot of inspiration. The band is on the verge of signing a publishing deal with a new but impressive company and is jazzed by some facetime Morgan has had with major-label reps in . There also is some press momentum –– virtually hundreds of reviews of Novels are floating around in cyberspace and nailed down in print. Not all are favorable. But most are.

If the songs were chapters, Novels would be a blistering page-turner. Most of the 11 tracks gallop swiftly and smoothly, heavy on Wyatt Adams’ propulsive drumming, Marley Whistler’s pounding bass, and on punchy guitars full of twinkling, synth-sounding harmonics and arpeggio strumming. Songwriters and lead guitarists Morgan and Matt Mooty share lead-vocal duties, with Mooty playing the ’80s-synth romantic to Morgan’s gritty punk-rocker. Neither comes on too strong but can still punch up a killer lyric. Both are ready for radio.

There are some contemplative moments, but mostly the disc just pumps. Still, Novels is almost, well, novel in its ability to be both delightfully distracting and demanding of attention. The themes are in keeping with the right stuff of modern rock: love, relationships, and life. The stories are unfussy and uncomplicated, but scattered throughout are little gems of insight and melody, forming a silvery tableau that sparkles in the high Minimalist style of Joy Division, The Stills, and Interpol.

The Burning Hotels were perhaps the most buzzed-about band to ever appear on the 817 scene. One of their first shows, at the dearly departed Wreck Room, was packed to capacity. Based on a few recent local shows, the band is still one of the biggest draws in town.

Some of the songs –– including “Where’s My Girl?,” one of the best on Novels –– date from those days. You could say the band’s approach to recording –– and writing –– is relaxed. “We’re not super-prolific,” Morgan said. “We’re not writing songs every day. But we don’t settle. … There’s no pressure in getting another song out. It gives us more freedom just to be content with what we do.”

The band did some preliminary recording for Novels last December at Blackwatch Studios in , , and did the rest in January under the guidance of producer Will Hunt (Evanescence’s Amy Lee, The Polyphonic Spree) at his Spaceways Studios in . Hunt and engineer Chad Copelin contributed some instrumental work.

Though some synth flourishes pop up here and there on Novels, The Burning Hotels’ sound hasn’t change much since their debut EP, 2007’s Eighty-Five Mirrors. Consisting of guitars, bass, and drums, the songs on Novels average two to three minutes in length, and vary in arrangement to make for a dynamic long-form listen or allow for concerts full of highs and lows and points in between. The sound’s simplicity is deceiving and often misunderstood. Hyper and hypnotic, it swirls and kicks in familiar patterns but is sometimes overly reminiscent of its proudly worn influences. Like a lot of successful indie-rock bands, though, The Burning Hotels are honest to their muses and are talented enough to satisfy them. The band’s sincerity is undeniable.

Criticize the Hotels for not progressing. Praise them for sticking to what they know best. Either way, the sound seems as fresh today as it would have been during Joy Division’s heyday of the early 1980s. The Hotels’ first hit, “Stuck in the Middle” (2007), is still a barnburner, especially live. The song, which the band played in a cameo performance in the ’09 summer tween flick Bandslam, comes on strong, with Adams’ kick drum thumping like a massive machine gun and Mooty’s and Morgan’s guitars matching it beat for beat while moving up and down the fretboard. After a dramatic pause, the bass and Adams’ swishing high-hat enter as Mooty begins to sing, his voice masculine but just a little watery, just a little vulnerable. Very Robert Smith-ish. “I walked in / You walked out / I got in / You got out / As usual, I’m stuck in the middle.” The song slouches in the middle, where Morgan croons wispily as if from the Great Hereafter, “White at night / I am dead.” The part could have come from a different song but does its duty as a buildup. Mooty, Morgan, and company respond to its sudden dissolution by ratcheting up the intensity.

The first single, “’s Birthday,” is a charmer and deserves some major airplay. The song is about lovers and also the sometimes buoyant, sometimes crushing weight of love itself. A swaying, chiming guitar introduces the song before the drums arrive at a toe-tapping pace and Morgan sings plaintively, “Tell somebody / That you’re in love / Tonight.” The verse is soon followed by, “Ya-aa-aaa / YA-aa-aaa / I’m sorry, girls / She stole my heart,” which is as endearing as it is somehow melancholy. The chorus barrels in explosively almost unannounced. The guitars charge forward. ’ drums rumble like a racing locomotive. “When you told me we were in love, you totally lied,” Morgan sings, cramming all of the words seemingly into one. “I asked you for my shit back, it didn’t even make you cry / Never knew anything, never knew anyone / Stay here in ’til I know that my days are done.” The breakdown that follows is dappled and bubbly. A short, nasally, melodic, ’80s-style guitar figure twangs over a starlit wash of synths. “Tell somebody / That you’re in love / To-niiiiight-ight!” If you’re not, you might actually wish you were indeed in love at the end of “’s Birthday.” (Or maybe not.)

The song is just one in a string of potential radio hits. “Boy or Girl” is a composite of several short, seemingly disparate sections but totally works as whole. The intro is built around an airy, hyper-kinetic filigree of percussion and guitar. The bridge is arena-rocking. The chorus finds Mooty’s and Morgan’s voices booming in unison, “How long, how long, will I be alive?” The meat of the song is a rollicking, smoldering groove, with plink-plunking, Joy Division-esque guitar notes dancing gaily around the steady beat. “I’m so fine,” Mooty sings, “Oh, I’ve / Got a boy that’s mine / He really needs me, oh.” The “boy” is Mooty’s two-year-old son, Ben.

As accessible and original as “’s Birthday” and “Boy or Girl” is the aforementioned “Where’s My Girl?” Over a hiccupping beat, Mooty’s and Morgan’s guitars harmonize on a dainty, melancholy riff that sounds eerily like a doo-wopper singing, “Ooh-ooh OOH-ooh-ooh.” The guitars begin to clang jauntily as Morgan, in his huskiest voice, sings, “Entertainment / Is to blame / She’s standing / Still as frame / Stripes and numbers don’t compete with your green eyes / Will you stay with me / Just tonight?” The drums and bass suddenly dissolve, leaving just handclaps –– clap-clap clap, clap-clap clap –– and a lonely, off-handedly strummed and ringing guitar. The chorus explodes, all quicksilver six-strings and ’ mercurial triplets. The call and response in the chorus is pretty damn cool. “No, where’s my girl?” Mooty starts. Morgan returns, “I know she’s out there.” And the interplay goes back and forth before culminating in utter harmony.

The world is full of skinny, handsome guys with guitars whose music is polished and professional. What may ultimately set The Burning Hotels apart is their ability to craft music that rocks and can be rocked onstage and also their penchant for melodies that are new but seem to have always existed. Most of The Burning Hotel’s songs are not necessarily challenging but are always engaging and full of surprise. There’s a sense of mystery to them, an enigmatic, restless longing that may set the heart to breaking and the feet –– and the booties –– to shaking. With Novels, Matt Mooty, Chance Morgan, Wyatt Adams, and Marley Whistler have managed to achieve a kind of visceral intellectualism, keeping us intrigued, entertained, and on the edge of our seats until the last note and last call.

“I think it’s awesome,” Morgan said of touring. “There’s nothing else to described being in a different city every day, in a different bar, with four best friends playing the music that you love. I think that is success.”