Music awards competitions are not perfect. Ours certainly is not. Is the concept itself? Hmm. On one hand, I don’t think pitting musicians against one another in what amounts to a glorified popularity contest is necessarily healthy in a cosmic way –– artists should “compete” only with themselves. On the other hand, local musicians, who work their asses off for little or no tangible reward, could use the little love that being nominated –– or winning –– brings. 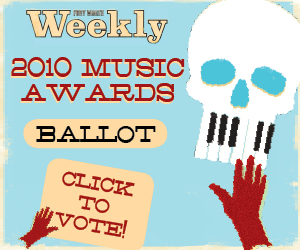 The reflection in a local musician’s mirror should be a little brighter knowing that, say, 800 people voted for him or his band, even if he didn’t win. That’s a lot of people who think you’re pretty cool. You should feel good. Now about that ballot … I say this every year, but in response to a certain comment on Dallas Observer’s music blog, I’ll say it again. Yes, I help pick the bands on the ballot, but I don’t do it alone. And having a few beers with me in no way guarantees a musician a spot on the ballot. The bands are selected by write-in votes by members of our nominating committee (composed of club owners, booking agents, other journalists, and radio DJs). Personally, I think JJ & the Rogues should have made the ballot. Somewhere. The Dirty Dandies too. And Prophets of Rage and Within Chaos. And Jefferson Colby’s new album, Semantics (Metaphysical Mood Music), the band’s second this year. And I think Keys Lounge and White Elephant should have been nominated for best venue. Alas, my personal tastes can take me only so far. Also, based on readers’ votes that have been coming in and being counted, I indeed believe that a popularity contest is under way, which is why we’re doing something to help handicap the voting process. On the ballot online now, there are hyperlinks to each band’s MySpace or web page, which will allow voters to make informed choices rather than voting for the band or artist that’s “the coolest to hang out with.” I’ve also been asked about Titanmoon’s nomination for MVP along with two well-known charitable organizations, Fort Worth Sings and Fort Worth Music Co-op. The band helped open an orphanage in Pakistan. Pretty impressive. So are our 13th Annual Fort Worth Weekly Music Awards perfect? No, but perfection is often ugly in its pursuit.

From 6 p.m. to 9 p.m. on Wed., June 23, we will be celebrating the release of our 13th Annual Music Awards charity compilation CD at Love Shack So7 (817 Matisse St. in the So7 Development, 817-348-9655). Live in Studio features new or previously unreleased material recorded over two days at Eagle Audio Recording on the South Side by several nominees: Whiskey Folk Ramblers, Chatterton, Clint Niosi with The Theater Fire’s James Talambas, Ginny Mac, Titanmoon, The Dangits, Pinkish Black, Browningham, Alan: The Universal Answer is Both, Christian L. Williams, and Jason Worley. For the Love Shack CD release party, Chatterton, Alan, and Worley will perform acoustic sets along with another nominee, Calhoun, and two more nominees to be announced later. Admission is free, and proceeds from the $5 sale of the CD will benefit our 2010 Music Awards charity sponsor, the Tarrant Area Food Bank.