With the current production of Gem of the Ocean, Jubilee Theatre has given the late August Wilson’s lyrical 2002 drama its Southwest premiere. As directed by Akin Babatunde, the play is a big gift box full of historical, spiritual, and literary delights, although it’s not for those who prefer their American plays to have an accessible, documentary-style realism.


In one of the show’s truly mysterious moments, a young black man is sent on an imaginary voyage across the sea on a tiny paper boat. When that boat is unfolded, it’s revealed to be a bill of sale for one of the voyager’s slave ancestors. If that sounds like a goosebump moment, then Jubilee’s fierce and benevolent staging is probably for you. 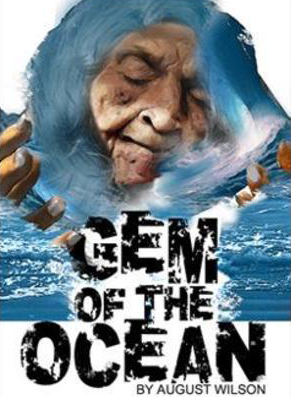 Set in 1904 Pittsburgh, Gem deals in part with the historical influx of Southern blacks to Northern mill towns in search of post-Civil War independence. Many are invariably drawn to the home of Aunt Ester (Cheryl Tyre), a sweet but demanding old eccentric who insists she was born during the first shipment of Africans to the Virginia colonies way, way back in 1619. Nobody challenges her claim of being nearly 300 years old because she possesses powers of healing that are legendary. Indeed, the recent young Alabama transplant Citizen Barlow (Akron Watson) climbs through her window and begs to have his soul scrubbed of an unnamed crime. Sharing Aunt Ester’s household are laundress Black Mary (Mikala Gibson) and handyman Eli (Bill Hass). The wisecracking Solly Two Kings (Douglas Carter), an ex-slave who worked the Underground Railroad, is on hand to flirt with Aunt Ester, and Black Mary’s brother Caesar (Al Garrett), a cruel and greedy flophouse owner, periodically appears to flaunt his iron fist. They cooperate and clash in a series of showdowns inside Aunt Ester’s parlor, whose fleur de lis-printed walls seem to glow and breathe thanks to designer George Miller’s simple but magical set. The show reaches a mystical crescendo with Citizen Barlow’s hallucinatory trip to the William Blake-ish City of Bones, an undersea necropolis populated by slaves who perished during their passage across the Atlantic Ocean.

Like other August Wilson plays, Gem of the Ocean proves that beautiful language doesn’t always have to be subtle language. The pitch of performances under Babatunde’s direction is often loud and boisterous, but the Jubilee actors still nail the playwright’s slangy dialogue and the vivid current of symbolism it conveys. Thanks to the performers’ firm grasp, the audience can more easily wrap their heads around the sometimes-vague mystical talk, and I’d rather savor the juicy red meat of Wilson’s supernatural poetry than watch a drier, more nuanced interpretation. Gem won’t shine without an incandescent actor in the role of the 285-year-old Aunt Ester, and Tyre burns just right. She lets her gaze linger distantly in a way that suggests both prophetic vision and earthly blindness, which suits this formidable ex-slave, who is simultaneously a rambling old fool and a truth-telling matriarch. Watson plays Citizen Barlow as a perpetually willing student, whether tremblingly submitting to the spirit-cleansing ritual performed over his body or just discovering his romantic prowess through courting Black Mary. As Black Mary, Gibson reveals more layers than the other characters –– her shy, downcast eyes gradually give way to steely and passionate gazes as she finds her own purpose in Aunt Ester’s household.

Gem of the Ocean overflows with more biblical allusions and imagery than a Sunday evening tent revival, but Wilson clearly had a lot more on his mind than saving souls. He’s interested in the earthbound journeys of his haunted women and men at a very particular time in American history, when the shadow of slavery afflicts them from the very recent past and when hard-won freedom is both seductive and dangerous. Gem’s strife-ridden 1904 Pittsburgh mill town is a little like Wilson’s fabled City of Bones, but it’s not yet redeemed by African-American cultural memory. Jubilee’s broad but utterly convincing production polishes the playwright’s cosmic vision of suffering as transcendence to a bright gleam.

Texas Ballet Theater company director Ben Stevenson has always been kind to his youngest dancers, regularly showcasing them in solo spots. A few seasons back, he turned the title role of Peer Gynt over to then-19-year-old company dancer Andre Silva. But nothing has equaled the opportunity given last weekend to 17-year-old Betsy McBride, who got the chance to dance Princess Aurora in a matinee performance of The Sleeping Beauty at the company’s season-closing run in Dallas’ Winspear Opera House.

Aurora’s journey from the Rose Adagio in the first act to the grand pas de deux in the third is a minefield of technical challenges that even seasoned ballerinas find daunting. McBride did not disappoint. She performed with assurance and opened up with some joyous dancing in the final duet, winning a generous ovation at the final curtain. More polish and insight will come with experience, but she has mastered the fundamentals. And except for a curious pained expression when smiling, she made for a marvelous-looking Aurora.

McBride was fortunate to have as her prince Carl Coomer, a sympathetic partner whose technique has developed dramatically in his three years with the company. He now looks the true danseur noble in his solos. The performance also featured Thomas Kilps in a brilliant cameo as the hyperactive fop Gallison, hopelessly trying to organize a picnic and hunting party in the second act. And we can’t forget Michelle LeBoeuf as a furious Carabosse in the opening-night performance. She was not the wizened old crone of most productions but a sexy, full-blooded vixen alive with venom at being left off the guest list of Aurora’s christening.

This Sleeping Beauty is the same opulent production seen in Bass Hall last month, and it looked just as impressive in the new Dallas opera house. Unfortunately, the production shared the same drawback: the canned music that doesn’t do Tchaikovsky’s sumptuous score justice and robs the dancers of some spontaneity. Margo McCann, TBT’s managing director, indicated in a brief conversation recently that reinstating live music would be a slow process. The Fort Worth Symphony now requires money pledged up front before scheduling any performances, a safeguard against being dropped without warning a la last season. And even if an angel appeared today with funds to cover TBT next season, the FWSO’s schedule is set –– there’s no room for any additional performances. TBT also is without a conductor –– the company’s music director died unexpectedly about a year ago, and a replacement has not been found. What will probably happen, McCann said, is that one or two programs will be worked into the orchestra’s schedule as the money is raised and a conductor is found until a full season can be coordinated with the orchestra. Let’s hope it doesn’t take forever. TBT needs live music, especially for its blockbuster story ballets. — Leonard Eureka